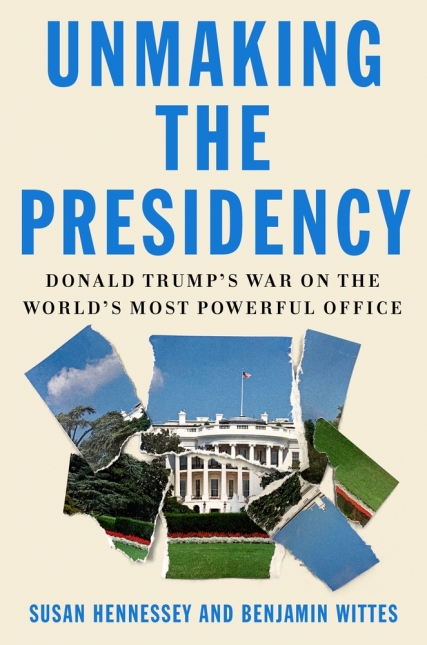 Pity the poor author attempting to document this administration in real time. Reading Bob Woodward’s Fear or David Cay Johnston’s It’s Even Worse Than You Think is to hark back to what seems ancient history, episodes that are difficult to remember in the crush of events trampling daily — hourly — out of the White House in the time since.

Indeed, between the printing of the advance reader copy of Unmaking the Presidency and the release of the final version, co-authors Susan Hennessey and Benjamin Wittes — executive editor and editor-in-chief, respectively, of the Lawfare blog — needed to append a lengthy postscript in an attempt to catch up, discussing the early days of the investigation into the Ukraine scandal.

And still they have ended up well behind the latest: Consider that today, the book’s release date, is also the first day of arguments in Trump’s Senate impeachment trial.

This perpetual whipsawing from one presidential affront to another is just one dimension of our current political reality that the authors deconstruct. Far more than a simple recounting of Trumpian outrages, however, the authors present a sobering case for how the current president is altering the fabric of the office itself, possibly for keeps.

The point they drive home — a realization that perhaps has been sinking in with much of the electorate over the last three years — is just how little of the U.S. presidency is guided by statutory regulation.

Instead, it is primarily built upon traditions and expectations that have accrued from one office-holder to the next. Candidate Trump ran on promises of thumbing his nose at tradition and trampling all expectations. Promises kept! As the authors emphasize: “Trump has rarely had to exceed the limits of executive power in order to abuse his office.” This president spotlights the extent to which the office depends upon its holder’s noble intent.

In place of time-honored customs, the authors delineate in detail all the ways in which Trump has created a personalized, “expressive presidency,” one that is entirely about himself. Certainly, he is the first president to make it plain that he sees himself as larger than the office, and openly to show contempt for its normative boundaries.

This is the “I dare you” president, bulldozing his way through all democratic convention and challenging anyone to make him stop or hold him to account. He is “actively betting against the framers’ vision of an at least minimally virtuous presidency and the Constitution they designed to achieve it.” He makes no pretense of caring for civic virtue, and his supporters bellow their approval.

The larger question is to what extent he is rewriting his successors’ views of the office, or, for that matter, those of the electorate. Is this an aberration or an ushering in of what is now considered “modern day presidential”?

The authors deliberate this question in engrossing detail, with each chapter illuminating the historical, legal, political, and cultural aspects of a presidential norm into which this commander-in-chief has thrown a hand grenade.

Take, for example, Trump’s lying. The jaded electorate is used to political dissembling and mendacity; what we’ve never encountered before is a chief executive who 1) lies about trivialities, and 2) cannot be shamed.

“Trump lied about anything and everything, and he did it all the time. He repeated the same lies over and over again. He lied indiscriminately and about matters so mundane that factual correction served no particular educational function.”

The prestige of the office can’t but be diminished when it is occupied by someone incapable of shame, unconcerned about credibility. “A public presidential statement today comes with no presumption of factual accuracy,” the authors write. But our inability to trust what the president says presents a danger to U.S. security.

Just weeks ago, after the president green-lighted the assassination of Iran’s most powerful general, Qassem Soleimani, virtually no one, including our surprised allies, was willing to accept at face value the claim that it was done in response to an “imminent threat.”

Rather than draining the swamp, this administration has drained any reservoir of trust with its citizens, and we know better than to believe what it tells us. What happens, then, when we really need to believe what we’re being told but can’t?

In the same vein, the authors describe the administration’s erasure of any distinction between official and unofficial statements. For example, no definitive answer was ever provided about whether presidential tweets represent official positions and policy, leaving the rest of us, including officials of the U.S. government, to figure out which is which. After all, the tone, the language, the use of all caps, is the same in either case; nothing ever sounds “presidential.”

Generally, we’ve learned that firing by tweet is real, but major policy announcements via Twitter, such as a proposed ban on transgender servicemembers in the military, is a trial balloon.

Still, even the most cynical among us were unprepared for the October 9, 2019, letter sent to Turkey’s President Erdogan that begins, “Let’s work out a good deal!” How to comprehend that this was official correspondence — not somebody’s satirical imagining — on a matter of deadly import from one head of state to another?

And yet, as this election year begins, along with the president’s trial in the Senate, it is unclear whether Trump will pay any price for his shattering of all convention. Short of holding a secret ballot, the Republicans will never vote to convict him, hostage as they are to his poll numbers and Twitter tirades.

So the only redress is through the ballot box. “And there’s a real risk,” the authors caution, “that…Trump will lose the popular vote by larger margins but still win the Electoral College.”

Even if this is only a one-term presidency, it will take time to understand what’s been spawned as the new normal. Perhaps, if four years of chaos finally shakes the American electorate awake and motivates a majority to vote, not just in 2020 and not just at the top of the ticket, something positive will have come from it.