Magic: A History: From Alchemy to Witchcraft, from the Ice Age to the Present 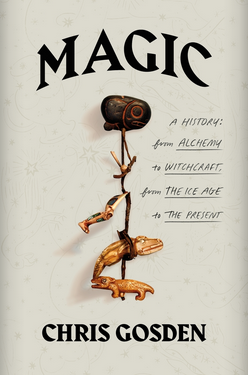 Chris Gosden’s Magic: A History is not for the faint of heart. Not that it’s frightening or infused with the supernatural. Rather, it is a dense, exhaustive tome designed less for the uninitiated than for those with an already deep interest in the topic and experience with the subject at hand.

Gosden is clearly in the latter camp. An archaeologist and professor at the University of Oxford, he is well versed in the interconnectedness of the material and spiritual worlds, and Magic reveals the expertise of a long career. If you’re willing to settle in to read Magic, you’ll be greeted with the vast detail and information the author provides.

To begin, we need to ask what we mean by “magic.” In short, says Gosden, it hinges on our interaction with the universe. He writes: “Human beings participate in the universe directly, and the universe influences and shapes us.” Further, he cites Levi-Strauss, stating that “magic was a humanization of the universe.”

And such humanization is necessary. Gosden notes (paraphrasing Max Weber; this book is nothing if not well sourced) that “a world without magic is a colder place, lacking emotion and wonder...without soul and...heart.” Indeed, he provides evidence of magic having existed as far back as humans themselves.

Gosden devotes a great deal of space to connecting magic, religion, and science. Among these, magic came first. He points to pottery and other relics that demonstrate the animalistic ties — common in magic — meant both to connect magic’s practitioners with nature and to protect them from threats in the natural world. One such practice included the burial of animals alongside humans during the late Natufian period.

Other early examples of the incorporation of animals into magical rituals were found in Gobekli Tepe, an ancient Turkish temple — predating Stonehenge by 6,000 years — filled with statues that merged animal and human imagery. Such sculptures were intended to protect humans from animals and to leverage the creatures’ supposed power to alter the universe.

It wasn’t until 8000 BCE that religion — essentially, the codification of magical beliefs — began to take hold, and not until the Ubaid period (5500-4000 BCE) that it truly became institutionalized. In religion, gods were seen as controlling the natural world but not acting on their own. Instead, magic controlled them.

And what of science’s relationship to magic? Gosden points out similarities between the fields. Metallurgy, for example, has feet in both disciplines. Ancient cultures used metallurgy as a method of celebrating nature. Today, we can convert metals from solid to liquid and back, shaping them to our will. Surely there is something magical in that. Even baking has an otherworldly element to it; the mere addition of yeast will inflate a mixture through a seemingly invisible process.

In many instances, magic comes out looking better than science because the latter, in its earliest iterations, at least, could only address symptoms and possibly ameliorate discomfort. Ritual magic, however, “got to the root cause of the problem, which often emanated from the spirit world.” And lest this sentiment sound hopelessly primitive, Gosden notes that three-quarters of respondents to a 2005 Gallup poll reported believing in “the paranormal.”

For serious students of the topic, Magic provides bountiful information in the form of charts, timelines, and other data that wouldn’t be out of place in a textbook. But such an encyclopedic scope may overwhelm casual readers. Indeed, at times, I imagined swaths of the text being recited by a droning docent in a darkened museum. Unfortunately, the weight of its endless minutiae crushes some of the book’s, well, magic.