Dancing Through It: My Journey in the Ballet

A professional ballerina comes of age and discovers her true worth. 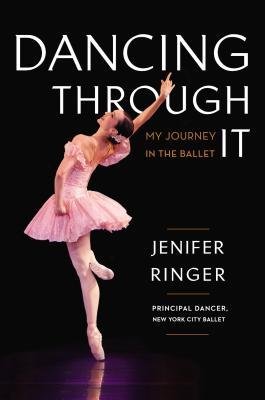 Jenifer Ringer, recently retired from her longtime profession as principal with the New York City Ballet, was lovely and distinctive dancer, with an unusual warmth and graciousness. She had a strong classical ballet technique and an unshowy, unmannered presentational style. And her face was worthy of a beauty pageant. Now, having left the stage, she is faced with a major life transition. On the basis of this memoir, her first book, she just might have a second career as a writer.

What she has produced is both a coming of age story and a love story. Her book also deals with warm family relationships, with the dedication to an ideal that artistic pursuits require, and with failure and redemption. The common threads running through it all are dance and religious faith. In terms of dramatic narrative, the heart of the book is the emotional and spiritual crisis that overtook her as she emerged from late adolescence into womanhood. It nearly ruined her dance career and could well have left lasting scars. But she managed to pull out of it and to continue to perform. Indeed, she had a 25-year dance career.

Because dancers must start training so young and must make important life decisions when they are little more than children, they face a unique paradox: as performers they carry responsibility that makes them worldly wise beyond their years, while at the same time they embark on a sheltered and single-minded existence, living in something of a cocoon. Thus they are both young and mature at the same time. Many years later, Ringer told an interviewer: “I was sixteen when I became a professional. I wasn’t prepared to cope with being in an adult performing world so my coping mechanisms turned into eating disorders and body image issues.” (While many young women bemoan their imperfect body parts, dancers have a very special, sometimes fraught relationship with their bodies, as day after day they scrutinize every inch of themselves in the ever-present, unforgiving mirror.) At the time of the interview Ringer had long since come to terms with what she refers to as her “dark years,” but when she was living them she was filled with self-loathing, depression, and shame. And she did what for a dancer was unpardonable — due to compulsive overeating she gained so much weight she couldn’t fit into her costumes. After a very promising early career, during which she was given new roles year after year, she was fired from NYCB at the age of 24. She contemplated suicide.

Religion had always had an important place in her family life and indeed it is the lynchpin of this book. But by the time of her breakdown she had drifted from the church, and had also lost her trust in God. At her darkest, “I told Him I was worthless and repulsive. It didn’t occur to me to ask for help or forgiveness — I was too repellent even for God. . . . I didn’t think I could ever crawl out of the deep abyss in which I was trapped.” Throughout the book she expresses her feelings about her faith so openly that it may make some readers squeamish. She writes of “lean[ing] on God and invit[ing] Him ever deeper into my life” and refers to herself as a Daughter of the Lord.

Instead of killing herself, she managed to address her situation: “God was taking me on some kind of journey, not revealing the whole path but showing His love for me in tiny steps along the way.” She had already attended college part time and now obtained her degree. She got jobs as a church receptionist and a workout instructor and by chance bumped into a teacher who teased her back to dance class, which she had given up while hiding from the world. She began to accept herself for who she was, not how she looked. (“It was not my thought. It must have come from God.”) Her problems with food diminished, she lost the lethal extra weight, and within a year she had returned to the stage and was soon promoted to principal dancer: “I was dancing for God and I know He was pleased.”

Her dramatic story takes up less than a quarter of the book.  The rest is devoted to clear-eyed, graceful descriptions of her initial attraction to the ballet, the life of a professional dancer, performance tips such as the preparation of toe shoes, touring, competition with other dancers, technical aspects of partnering, and all manner of “insider” details. This will be fascinating to balletomanes, but of even greater interest to aspiring ballet students. Her analyses of ballets she danced will provide food for thought to those who follow the ballet scene closely, especially the New York City Ballet. Of Balanchine’s eternal Serenade she writes, “There is a ballet that is like an ocean: it seems to stretch beyond the horizons of the stage. No matter how many times I see or dance this ballet . . . I always find something new to discover, something so beautiful that I wonder if the audience should laugh or cry.”

Last but hardly least she writes of falling in love and marrying a fellow dancer, James Fayette (“my hero”), who had offered a helping hand when it mattered most, by asking her to perform with him when she was overweight and had renounced all thoughts of the stage. Clearly he has been a figure of strength in her life ever since. Once she had regained her equilibrium she had sufficient confidence in her career to interrupt it to have two children, which meant undertaking the arduous process of getting back in shape — not once but twice. At the time of writing, life seems to have been worthwhile after all.

Nancy Reynolds, a former dancer with New York City Ballet, is presently director of the George Balanchine Foundation Video Archives. Her books include Repertory in Review: 40 Years of the New York City Ballet and No Fixed Points: Dance in the Twentieth Century.