The World According to Tom Hanks: The Life, the Obsessions, the Good Deeds of America’s Most Decent Guy

Is the beloved actor really all that great? (Spoiler alert: yes.) 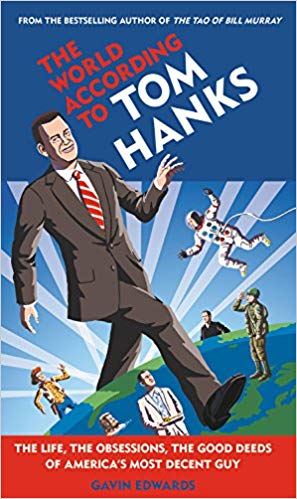 Tom Hanks has portrayed the good, the very good, and the not so bad, but never the ugly. He’s likable whether courting a mermaid, waiting for a bus, or avenging a death in the family.

If he ever makes a Western — one of the few genres he has yet to explore — he’s sure to sashay up to the bar, tip back his white hat, and order a sarsaparilla. (And no, Sheriff Woody in “Toy Story” doesn’t count as horse opera.)

Hanks’ acting, producing, and directing skills are topnotch, and he has a trophy case full of Oscars, Emmys, Tonys, and Golden Globes as proof. President Barack Obama also presented him with a Presidential Medal of Freedom for his service to the nation in 2016. Few honors have eluded him. That friends, fans, and colleagues cannot say enough good things about him should come as no surprise to anyone following his career and personal life.

The World According to Hanks: The Life, the Obsessions, the Good Deeds of America’s Most Decent Guy, by Gavin Edwards, is chockfull of previously published praise for the beloved actor. (Although Hanks sent Edwards a nice note, the author had no access to the actor, so he draws heavily on Hanks’ interviews with others.)

What new material Edwards gleans from his communications with lesser-known people essentially reiterates what the more famous ones already have said about the beloved leading man.

If anybody should resent Hanks, it’s Peter Scolari, his costar on the TV sitcom “Bosom Buddies.” While Scolari’s career faded, he watched Hanks’ star go supernova, but he professes his admiration for his good friend over coffee with Edwards:

“[‘Bosom Buddies’] was just a silly TV show really. But it starred one of America’s most important actors — I don’t mean in his time, I mean in all time. And I kept up. I returned serve. And it laid the foundation for this deeply sentimental, deeply personal affection that we have for each other that embarrasses me.”

Steven Spielberg, Garry Marshall, and other filmmakers tout Hanks’ formidable acting chops, but Edwards seeks out the opinion of Holly Fulger, a friend of 40 years, for more personal commentary:

“Sometimes the mindset of actors is fueled by neuroses or intense need. He is different — the way he lives his life, it’s touching to me. He’s a tender soul. I don’t mean to make him sound like a saint but he is good. His goodness, it could make me start to cry. He is possibly the nicest human being, and the kindest, and the most soulful. Everything you read is all true and I would double it.”

Edwards, a Rolling Stone contributor and author of nine other show-business-related books, isn’t a great writer, but he is thorough. Along with a chronological history of Hanks’ life, his book includes chapters on each of the “Ten Commandments of Tom” as ascertained by the author, as well as a complete catalog of Hanks' films from his debut in the 1980 slasher movie “He Knows You’re Alone” to “The Post” in 2018.

“[Hanks]…has always zealously guarded the boundaries of his private life,” writes Edwards in his introduction to the filmography. “The flipside of that reserve is the full-body commitment and emotional exposure he brings to his film roles. Watch his movies and you’ll have a good picture of the man: his passions, his joy and his grief, his trajectory through the world.”

Not a bad premise, but Edwards would have done well to limit his narrative to films of significance. Nobody is going to learn much about Hanks from “Toy Story 2,” let alone “Toy Story 3.”

Most folks couldn’t sit through such stultifying flops as “Dragnet,” much less apprehend anything of consequence regarding Hanks’ secret self from it. The same goes for the muddle that is “Cloud Atlas” and “The Bonfire of the Vanities,” the latter in which Hanks was miscast.

Whether he is writing about Hanks’ life or his movies, Edwards finds it hard to be selective. He’s rather like a fanboy, too carried away by the object of his adoration to focus on what’s most relevant, such as digging into the lows of his hero’s life: Hanks’ unsettled early years, his fractured first marriage, or his quest for a World War II memorial on the mall. In the end, maybe all Edwards wanted to do is redefine “nice,” as he writes in his preface, “The Nice Manifesto.”

“Tom Hanks is a really nice guy,” Edwards notes. Nice can be a handicap, an insult even, in a society corrupted by sleazy reality TV, gossip magazines, and trash talk on the free-throw line.

Rita Kempley is a former movie critic for the Washington Post and author of the sci-fi thriller The Vessel. A second novel is in the works.

At what point do “normal” people with certain traits cross the line — and how can we tell?