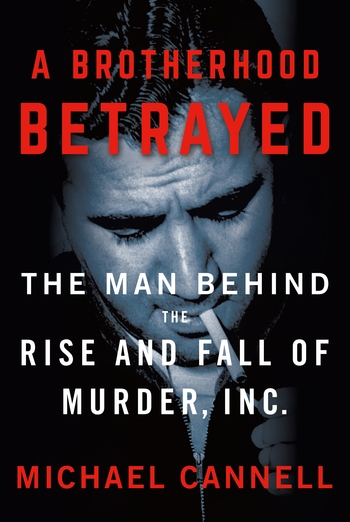 Abe Reles killed people for a living. During the Great Depression, he was the head of an underworld death squad dubbed Murder, Inc., a group of contract killers the Mob used to eliminate informers, witnesses, and defiant gangsters within its ranks, and anyone else who threatened its operations.

He was ruthless, brutal, and good at his job, ultimately confessing to 11 murders and offering the authorities the lowdown on dozens more. And on the eve of America’s entry into World War II, those confessions transformed him from hunter to hunted.

New York author Michael Cannell recreates Reles’ murderous career and suspicious death in A Brotherhood Betrayed: The Man Behind the Rise and Fall of Murder, Inc. It’s the story of the bloody birth of organized crime in the United States and how the testimony of a single turncoat exposed the Mob’s operations and sent four gangland kingpins to the electric chair.

Reles was a Brooklyn street-punk-turned-gangster whose almost comical nickname, “Kid Twist,” was an odd choice for a cold-blooded killer. One judge described him as a public enemy “as bad as Dillinger.” He coolly eliminated rivals and carved out his own fiefdom of vice and rackets, impressing Mob bosses who needed a level-headed executioner to police their growing empires of illegal gambling, extortion, and prostitution.

Reles, the son of Jewish immigrants, had earned the respect of Italian hoodlums as well as gangland Jews, making him an equal-opportunity assassin; no one could accuse him of favoring, or unfairly targeting, either of the groups operating under the Mob’s umbrella.

Cannell takes readers along for the ride as he documents — in remarkable, often chilling detail drawn from newspapers and archival documents — Reles’ inexorable rise. The hits keep on coming as he personally bumps off targets or dispatches his minions to kill the likes of rogue boss Dutch Schultz, who was gunned down in 1935. A Brotherhood Betrayed reads like a Brooklyn version of The Irishman, and Cannell’s riveting narrative unfolds with the simmering tension and explosive violence of a Scorsese movie.

Despite Reles’ businesslike efficiency when it came to eliminating his assigned targets, his hair-trigger temper proved to be his Achilles’ heel. He got away with murder after murder, only to wind up in prison in the mid-1930s for a senseless assault on a garage attendant; the outraged Reles fractured the man’s skull after the man kept him waiting for a few minutes.

This is also the story of Fiorello La Guardia, a reformer who targeted the Mob and police corruption when he became New York’s mayor in 1934, and Thomas Dewey, the Mob-busting prosecutor and future presidential candidate who put the infamous underworld leader Lucky Luciano behind bars.

Reles and Dewey were soon in a race to find traitors and informers — the hit man eager to silence them, the prosecutor determined to protect them and ensure they lived to testify. Then the unthinkable happened: Reles, in jail after underlings implicated him in a homicide, cut a deal and exposed Murder, Inc.’s operations.

As Reles once said, “the squealer must die.” It was both Murder, Inc.’s corporate mission statement and an eerie prediction of his own fate. In November 1941, his body was found outside beneath the window of the hotel room where he was under police guard while waiting to testify. Was he killed to end his betrayals? Did he commit suicide? Or did he fall to his death while trying to escape? Cannell sifts through allegations and contradictory evidence in search of the elusive truth.

Cannell is a former New York Times editor whose last true-crime book, 2017’s Incendiary, told how a pioneer of criminal profiling helped to capture a serial bomber — the Unabomber of his day — who was terrorizing 1950s New York. A Brotherhood Betrayed is another engrossing descent into the dark corners of the criminal mind, this time with a mystery that’s unlikely to ever be solved.

Dean Jobb, the author of Empire of Deception: The Incredible Story of a Master Swindler Who Seduced a City and Captivated the Nation, is the true-crime columnist for Ellery Queen’s Mystery Magazine. His next book, coming from Algonquin Books in July 2021, recreates the crimes of serial killer Dr. Thomas Neill Cream, who terrorized Victorian-era London and murdered four people in the Chicago area in the 1880s. You can follow him on Twitter at @DeanJobb.

Mothering Through the Darkness: Women Open Up About the Postpartum Experience