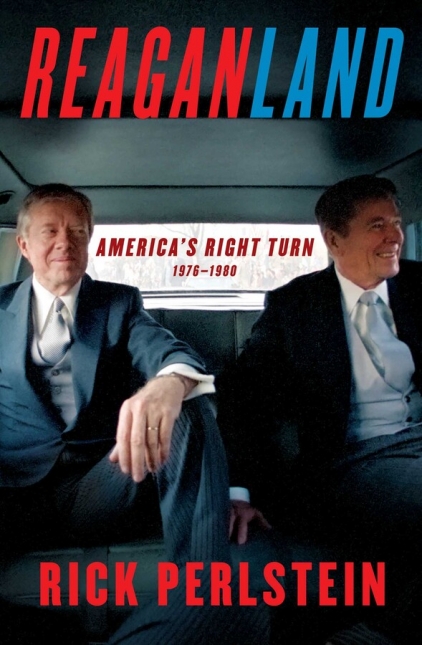 Even in the digital age, there are some hardbacks that demand prominence on the bookshelf. Among them are the Bible; Webster’s New International Dictionary of the English Language (second edition, unabridged); Winston Churchill’s six-volume The Second World War; The Glory and the Dream: A Narrative History of America 1932-1972 by William Manchester; and Winnie-the-Pooh.

Now, add Rick Perlstein’s four volumes documenting the rise of Conservatism in America. First, Before the Storm: Barry Goldwater and the Unmaking of the American Consensus; second, Nixonland: The Rise of a President and the Fracturing of America; and third, The Invisible Bridge: The Fall of Nixon and the Rise of Reagan. Now comes the fourth and final installment, Reaganland: America’s Right Turn: 1976-1980, which covers the presidency of Jimmy Carter and his defeat by Ronald Reagan, and the New Right.

Perlstein has received critical acclaim for each volume, and rightly so. His latest tome, at more than 1,000 pages, deserves special praise because it capstones the political changes in 20th-century America that led to Ronald Reagan’s eight-year reign in the White House, plus the four years of George H.W. Bush’s presidency, which many Republicans refer to as “Reagan’s third term.”

Reaganland begins in July 1976, when the presidential landscape was Jimmy Carter vs. Jerry Ford, with Ronald Reagan, the sore loser, sitting on his hands, refusing to support Ford but claiming he did. The Gipper seemed too old to run again in 1980 at the age of 69, but Perlstein shows how he managed to become the Cinderella at the Conservative ball, aided by a beleaguered Carter, who never took him seriously, even when it was too late.

Not a news-making investigative foray into the Conservative movement, Reaganland is, instead, a phenomenal collection of data and detail masterfully woven into a compelling narrative about how the country turned right, steered brilliantly and cynically by think-tank founder Paul Weyrich and direct-mail mastermind Richard Viguerie.

Perlstein poured extraordinary research into this book, and those who lived through the era may be stunned to learn all they missed at the time — or wished they had. Some will remember such colorful characters as Marabel Morgan, the blonde with the bubble hairdo and pink lipstick, who wrote The Total Woman and, in concert with Phyllis Schlafly, helped to defeat the Equal Rights Amendment, along with the singer Anita Bryant, who campaigned ferociously against gays and gay rights. Others may recall “Battling Bella” Abzug and Betty Friedan, the latter of whom wrote The Feminine Mystique and spoke publicly about her aversion to lesbians, whom she called the “lavender menace.”

The year 1976 was called “the Year of the Evangelical” when Americans were introduced to the Christian Broadcasting Network; heard Debby Boone praise Jesus by singing “You Light Up My Life”; and met Tammy Faye and Jim Bakker, Pat Robertson, Jerry Falwell, Oral Roberts, Howard Phillips (known to evangelicals as a “completed Jew”), and Madalyn Murray O’Hair.

The crucial issues of the era included the Panama Canal treaties and the Strategic Arms Limitation Talks (SALT) and SALT II; the Laffer Curve and “supply-side” economics; the fall of the shah, rise of the ayatollah, and taking of 52 American hostages in Iran (along with the eight lives lost trying to rescue them); Three Mile Island; the Camp David Accords; kidvid; and abortion, which Bill Moyers presented on television in 1978 as “the Issue that Will Not Go Away,” which, Perlstein writes, “was a pretty good bet.”

Pages later, the author describes a GOP fundraiser featuring “speakers from across the fruited plain” supping on “filet mignon and Jimmy Carter.” And quite a feast it was.

With editorial asides that are informed, trenchant, and occasionally laugh-out-loud funny, Perlstein pillories Democrats as much as he punches Republicans, and in the process becomes a trustworthy narrator. He makes a provocative case that the 1976 U.S. Senate election of Orrin Hatch (R-Utah) changed the legislative terrain and crushed labor-law reform, prompting one columnist to write: “Now is the time to put Big Labor up there with Santa Claus, the Easter Bunny and the Tooth Fairy.”

Writing with a light touch, Perlstein describes the dog whistles in Sen. Strom Thurmond’s newsletter to his constituents. The ardent segregationist from South Carolina praised “independent non-governmental schools” that support “prayers to God in school” and “regional ideals and values.” As Perlstein observes: “[H]e needn’t specify that the regional values he had in mind weren’t the consumption of fried green tomatoes.”

It’s stunning to read this book and realize the millions of dollars that have been spent trying to preserve white supremacy in the United States. Reagan’s racist strategy, after all, was to target “voters who felt victimized by government actions that cost them the privileges their whiteness once afforded them.”

Equally surprising is Perlstein’s declaration that Arthur Laffer, Robert A. Mundell, Robert Bartley, and Jude Wanniski were “arguably…the most influential economic thinkers in the history of the United States, even though their theories turned out to be substantially wrong.”

Unquestionably, Jimmy Carter’s presidency was hit with “crisis after crisis after crisis,” from Billygate to Bert Lance to a bitter challenge by Senator Ted Kennedy. But Carter seemed to create his own black cloud by preaching an austere gospel of gloom and doom, whereas Ronald Reagan blew bubbles about the economic boom he’d bring. “We live in the future in America, always have,” Reagan said. “And the better days are yet to come.”

Under My Bed and Other Essays

The body keeps the score in these reflections on fear and female autonomy.

All Who Go Do Not Return: A Novel