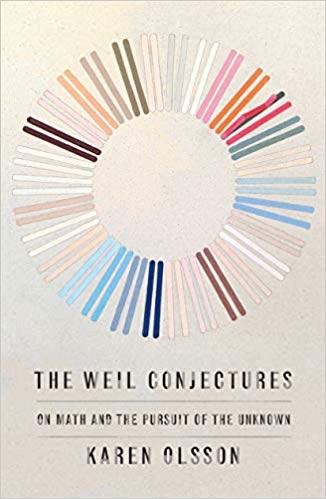 Depiction. A most unusual twist and turn of a book.

With The Weil Conjectures: On Math and the Pursuit of the Unknown, one enters the conjectural zone of Karen Olsson’s alluring dual autobiography/memoir. It has no table of contents, no index. Its 14 chapters range in length from three pages to 20.

It has neither an introduction nor conclusion, neither notes nor sources. It is peppered with 31 or so paragraphs of personal digressions. The central chapter (seven) is about purported dreams, both biographical and autobiographical.

The book is not thematic in any linear way, though a certain thread might be detected running through it. And its method of presentation is both poetic and philosophic. On the front end, the jacket art, a wheel with 30 pairs of multi-colored spokes (with one bowed), invites the reader to take a second look to see what one’s eyes might miss. On the back end, the author closes her book with a cryptic, albeit presaged, reference to Babylonian number systems.

And all of this — the philosophy, math, psychology, history, esoterica, and tantalizing impressions — is artfully offered up in the service of an original and revealing portrayal of a famous mathematician (André Weil, 1906-1998) and his even more famous philosopher-activist sister (Simone Weil, 1909-1943). Though so very different, both loved math, but for different reasons.

Juxtaposition. There is a lot of it in this slim volume chockfull of names and references.

Many names surface, everybody from Pythagoras to Gerolano Cardano (a 16th-century Italian mathematician, astrologer, and philosopher), from Luitzen Egbertus Jan Brouwer (a 19th-century Dutch mathematician and mystic) to Yutaka Taniyama (a young, 20th-century Japanese mathematician and real-life Shakespearean character).

Along the wondrous way, the reader is encouraged to connect the theoretical and biographical dots between everything from The Sacred Books of the East, edited by F. Max Muller, to Anne Carson’s Eros the Bittersweet, from The Simone Weil Reader to André Weil’s Foundations for Algebraic Geometry and much more.

You get the idea: There’s a lot of conceptual traffic in The Weil Conjectures. Then there’s the juxtaposition of the author’s profile: “I am a midlife mother of two,” writes Olsson. Yes, but she’s also someone who relishes watching 20-plus online algebra lectures by Harvard mathematics professor Benedict Gross.

All this juxtaposition is served up by way of would-be attempts to solve problems. There is, however, a confessional scene in the book in which Olsson reveals her “weakness for juxtaposition: I’ll sense that one thing might be illuminated by another thing and go on chasing the other thing.”

Yes, it can get dizzying at times. Perhaps that’s Olsson’s larger point. Even so, in her exquisitely written narrative, she does a thought-provoking job of juxtaposing the life and logic of the brother, André (the “last universal mathematician”), and the sister, Simone (the “quasi-canonized” genius).

As the two lives are placed next to the other, however, one is cast as a dramatic and perplexing figure situated alongside a settled and scholastic one. Simone, the political activist with a philosophical bent, is the action figure, the one who brought Homeric and Platonic ideas into factories to combat oppression. André, well, he was a world-renowned mathematician.

Attraction. From a young age, Olsson was drawn (sort of) to Simone.

“I wasn’t the only high school girl to check The Simone Weil Reader out of the library. Saint Simone, herself an imaginary friend to who knows how many lonely teenagers of a certain era. In her own way, a severe and elusive one.”

Translated: Simone was too distant, too baffling, too much on too many scores, too “what?”

In André, by contrast, Olsson found someone less elusive, less irritating, and yet mysterious — perhaps this explains her “indirect appreciation” of or “flicker of fascination” for his work. Unlike Simone, whose “claims are…[bolder] than they are convincing,” in André, there was the splendor of a regulated and more single-focused mind that apparently charmed Olsson. But the man had his flaws: He evaded the draft, stole another man’s wife, and could be “pretty abrasive,” “imperious,” and “irascible.”

“The more I learn, the more I begin to wonder whether [André’s] sanity somehow implicated his sister’s extremity, whether in the Weil family, the two roles were divided between them: he would be the great mathematician, and she would come unhinged.”

Simone had so many important and insightful ideas — on murder, oppression, language, force, political parties, colonization, science, and literature. Strange to think they would either be disparaged as the ramblings of “a nutjob” or dismissed as the work of an “unhinged” woman.

Here, Olsson’s frustrations cast her work in a dubious light; she hit the computer keys too hurriedly in selecting her adjectives. Fairness and exactitude demand better: A justifiable modification should be made in the paperback edition.

On the whole, they do. Why the qualification? The answer has to do with the nature of her enterprise. That is, hers is an impressionistic undertaking.

For all of her post-Euclidean panache, Olsson’s style speaks more to the mind in ways reminiscent of Proustian fiction. In paragraph after paragraph (see especially pages 183 and 188), this author of two novels creates a mood by which to read her, to engage her, and in ways analogous to the excitement of lovers “on the verge of grasping” something of the other. Thus, there is eros at work here, both similar to and different from what is found in Plato’s Symposium (also known as The Lovers).

Earlier this year, the world received a remarkable book of fact and fiction, a posthumous work by David Bowman entitled Big Bang. There’s a generous dollop of juxtaposition in that book, too, a lot of dots connected in revealing yet inexplicable ways.

“There are dozens of plots, which Bowman juggles with an agility that’s breathtaking,” wrote a reviewer for the Los Angeles Times.

Much of that same literary touch, a similar psychological mindset, and a similar sense of serious playfulness is be found on the pages of The Weil Conjectures. As I pondered page after page, I wondered what it would be like to chat with Olsson over coffee, if only to experience the delight of her cerebral company and the spectacle of her in rounded glasses and a black beret.

And this: several “Simone dreams,” and then several “André dreams.” Moreover, sometimes the narrative is linear, other times not. One moment, for example, Olsson portrays Simone hovering under a tiny tent under a thunderous sky outside of a convent near London. The next flea-skip of a moment, she sketches André’s mental vigor in figuring out how to “count solutions to polynomial equations in finite number fields,” this with, perhaps, “his cat perched on the edge of his desk.”

Often, the juxtapositions work, while, at other times, vertigo torments any mind trying to comprehend what Olsson tags as her “loose” and sometimes “messy” associations and analogies.

André and Simone, Olsson emphasizes, “thought their way into esoteric domains, found purpose in concentrated inquiry and likewise in the glimpse, the pursuit, the almost there, the exhilarations, the frustrations, of being partially shown and at the same time denied the dangling fruits of their searches.”

It is in that nutshell of a description that Olsson uncovers traces of the essence of the Weil siblings, that extraordinary pair infatuated with mathematics and the specter of timeless truths.

In the process, a picture emerges from Olsson’s biographical darkroom: an undiscovered snapshot of André and Simone, one with a philosophical depth not found in the book by André’s daughter, Sylvie, At Home with André and Simone. For this reason alone, The Weil Conjectures makes for a mind-opening addition to the literature (often turgid and one-dimensional) on the Weils — this despite the fact that André would object to Olsson’s “having ventured to write about him.”

For her part, Simone preferred that her person be left out of the story.

“The equations to be considered here are those of the type…,” wrote André Weil in a seminal 1949 paper entitled “Numbers of Solutions of Equations in Finite Fields.” His conjectures (later verified) ushered in the modern development of algebraic geometry.

Olsson’s book title is rooted in that conceptual soil…and in a strange story of how André’s life and fame intersected with two young Japanese mathematicians. On Simone’s side, there was, likewise, considerable conjecture, though of a kind that infused her life with a mysterious spirituality.

In assessing the historical legacies of André and Simone, Olsson surmises that the former’s status “remains in place,” while the latter’s influence “dwindled [in] this century.” Maybe, but if so, it is only because her prominence in the past century was enormous.

Nonetheless, since 2000, we have witnessed the continuation of national and international conferences on Simone Weil, along with an unending spate of new books, ranging from collections of Weil’s essays to biographies. Likewise, there has been an endless supply of new commentaries. There are even op-eds in the New York Times and the Washington Post calling attention to her ongoing relevance.

So, what explains this continuous worldwide interest in Simone Weil? Was it her humanity as reflected in essays such as “Human Personality”? Was it the exceptional attention she paid to the plight of factory and farm workers? Was it her skepticism about modern science, made possible in part by modern mathematics?

Or was it her extraordinary spirituality that opened wide onto the avenues of Eastern and Christian mysticism? In all of these ways and others, Simone and André were wired differently and thus fated for different destinies.

The art of writing. Notwithstanding Olsson’s Harvard mathematics degree and high talk of numbers, remember this: She is first and foremost a writer, albeit with a philosophical penchant.

Fact is, she is an exceptionally good writer, perhaps too good. Hence, The Weil Conjectures might be viewed as an erudite meditation on writing and its relation to math. The hope “of making thought exact, of bringing latent insights and feelings into a fuller, more realized existence” is a Sisyphean stone for Olsson.

To underscore that supposition, it should suffice to introduce Exhibit A: “The longer I go on writing,” she stresses, “the more I sense its limitations.” Curiously, if this is Olsson’s mindset, then, beyond a certain point, all is conjectural, which leaves Simone speaking to us in much the same way that two prisoners communicate with one another in code by taps on the wall separating them.

Exercise your mind. That is what reading this book does best.

In her conjectural, juxtapositional, and occasional dreamlike zigzags down the corridors of the inner lives of André and Simone Weil, Karen Olsson entices her more attentive readers to join in the joy of thinking, albeit with creative abandon in search of those hidden proofs that linger just beyond the next subway stop of our imaginations.

Ronald K.L. Collins is a retired law professor and co-director of the History Book Festival. His next book, influenced in important part by the thought of Weil and Camus, is Reason in Ruins: America’s Destiny in Perilous Times (Rowman & Littlefield, 2020). His essay (with Finn Nielsen) on Weil’s concept of law appeared in Simone Weil’s Philosophy of Culture: Readings Toward a Divine Humanity (Cambridge University Press, 1993), edited by Richard H. Bell.