A playful, erudite guide to our culinary evolution. 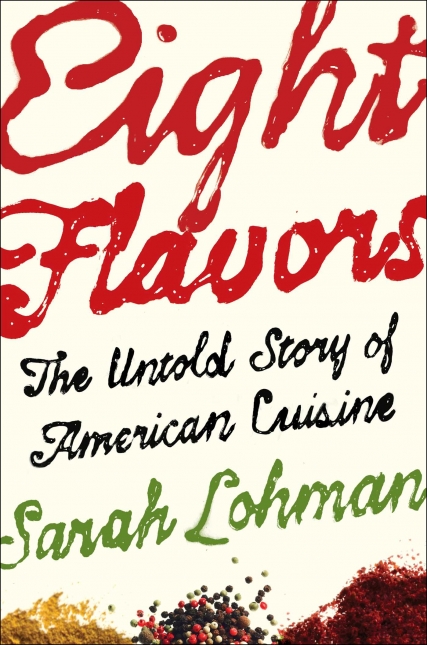 Sarah Lohman is a pioneer “historical gastronomist,” and what she has to say about food is more interesting than you might think. At first, Eight Flavors could appear to be another treatise like Salt: A World History or Olives: The Life and Lore of a Noble Fruit that takes a familiar food and quickly veers into a pedantic overload of way too much information.

Lohman’s book avoids that pitfall because she has eight subjects, not one. More important, her journey starts with recipes that are actually used in the kitchen. From the black pepper in chapter one to the Sriracha of chapter eight, she takes her cue from the cookbooks and menus of what Americans are eating, from Martha Washington’s kitchen to California’s trendy restaurants. She conducted a systematic analysis of cookbooks over several generations to identify these core flavors. Each chapter includes several recipes, old and new, incorporating the flavor in question and driving home just how basic it is.

Lohman takes us on this journey from its beginning with her summer job at an historical outdoor museum in Ohio that attempted to reproduce authentic colonial recipes. From there, we join her research trips to Mexico, Texas, California, and Upstate New York.

She keeps the personal notes in check so that they convey an infectious enthusiasm for discovering where these flavors come from and how they got into our cuisine. In fact, she maintains admirable discipline in narrating her histories in a clear and conversational prose.

While the first two flavors — black pepper and vanilla — may seem patently obvious, it’s nonetheless enlightening to find out, for instance, that we owe our passion for vanilla ice cream to two African slaves. The first is James Hemings (yes, Sally’s brother), who served as Thomas Jefferson’s chef in Paris and who brought back with the future president the recipe for a custard churned in ice and flavored with seeds from the vanilla bean. And it was another slave, Edmond Albius, in the Île de Bourbon, who developed the technique of pollinating vanilla plants so that they could be widely cultivated.

By the time Lohman gets to chili powder, though, you realize that she really is talking historical pantry items, not today’s organic/locavore/farm-to-table fetish. The chapter on chili powder features Gebhardt’s Eagle brand, the first commercial product that enabled the rest of the country to duplicate the chili of San Antonio.

Curry powder was popularized nationally by an Indian chef at the turn of the 20th century at Sherry’s restaurant in New York. Not quite as American as apple pie, it is nonetheless one of the nation’s core flavors.

As Lohman continues with her blend of food and travel writing, history and chemistry, personal memoir and thumbnail biographies, the reader finds out how soy sauce enjoyed an early popularity in this country only to be replaced by ketchup and Worcestershire sauce. Then, later waves of Chinese and Japanese immigrants reintroduced soy sauce, paving the way for Kikkoman to start manufacturing it in Wisconsin and popularize its use.

Garlic, originally stigmatized as the mark of non-assimilation among Italian immigrants, rose with the revival of French cuisine starting here in the 1930s to become today the most used of the eight flavors in the book.

It is Lohman’s interest in the chemistry of food that leads her to include a reassessment of MSG (monosodium glutamate), the much-maligned ingredient that used to characterize cooking in American Chinese restaurants. A flavor compound of salt and glutamate that occurs frequently in food, MSG has since been identified as umami, or “the fifth taste of savory” to complement the classic four — sweet, salty, bitter, and sour. Because it enhanced flavor, MSG was readily seized upon by producers of mass-marketed convenience food.

“Its controversial role as a putative cause of migraines or ‘Chinese restaurant syndrome’ turned the public against MSG, and prompted Chinese restaurants to put signs in the window ‘No MSG,’” even though it is also an ingredient in everything from Kraft to Kentucky Fried Chicken. This leads to today’s double standard.

“If it’s in Chinese takeout,” Lohman writes, “it’s called MSG, and it’s likened to poison. But when MSG is utilized by high-end chefs and brands, it’s referred to as ‘umami,’ and it’s celebrated as revolutionary.”

Lohman concludes her flavors with Sriracha, which she describes as a quintessentially American product, with Thai, French, and Vietnamese roots. She sees it as the winner in the hot-sauce boom, going well beyond a fad to represent a major new addition to American flavors.

“Contrary to the popular stereotype, Americans do like spicy food,” Lohman says. “It’s in our biology. Much like chili powder and curry powder, Sriracha gets us a little bit high every time we eat it. The capsaicin in its jalapeño peppers triggers heat receptors in our mouths, and our brains release endorphins as a response.”

Lohman includes an epilogue about her ongoing search for the “ninth flavor.” Matcha — a green-tea powder — pumpkin spice, and liquid smoke were among the candidates she identified at the Summer Fancy Food Show in New York City. In the meantime, this cheerful romp through culinary history — further enlivened by black-and-white drawings by Peter Van Hyning — will give you a new appreciation of what’s in your pantry and on your plate.

Darrell Delamaide, author of The Grand Mirage, is a writer and journalist in Washington, DC.