Thin Places: A Natural History of Healing and Home

A lyrical recollection of growing up amid the Troubles. 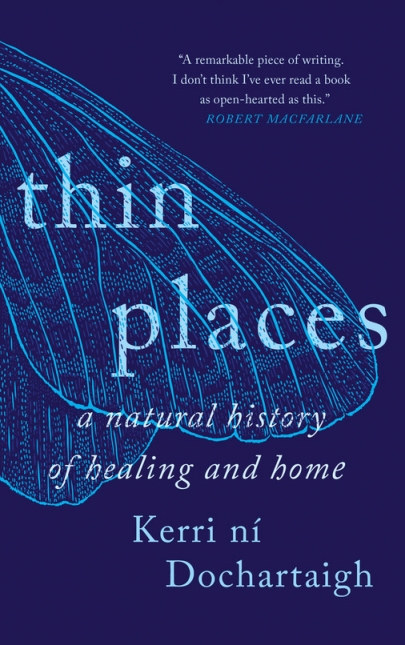 Early in her new memoir, Thin Places, author Kerri ní Dochartaigh describes why she moved back to her turbulent Northern Ireland hometown after years away.

“I have returned to the site of my trauma, and I am allowing the land to hold me in its strong, silent hands. I have found the words for butterflies in my native tongue, I am drawing their lines on my insides. I am ready now to speak of unnamable things. I know that so many of us are. To stand together under an ever-changing sky, and to speak of things like healing and learning, the saving of things that can still be saved.”

While we were both born in the 1980s, ní Dochartaigh grew up very differently from me. Yes, like her, I had one Catholic parent and one Protestant one, but I didn’t think about it much. For her, it was the thing that set her apart from most others around her. For me, a childhood in the 1990s was a time of glossy American prosperity; for her, it was the violent tail end of the Troubles.

Recently, I heard a tone-deaf news anchor lament how Putin’s invasion of Ukraine has disturbed the peace in Europe that had has lasted since World War II. I was aghast. “Wait a second,” I thought, “what about the wars in Bosnia and Chechnya, or the Troubles?” Then I realized these parts of history don’t figure into the European narrative we embrace here in the States. However, after finishing ní Dochartaigh’s luminous and achingly honest memoir, I know we have so much more to learn.

A common saying during the Troubles was, “If you’re not confused, you don’t know what’s going on.” A somewhat crass, shorthand version of the conflict is this: Protestants in Northern Ireland wanted to remain part of the United Kingdom; their Catholic counterparts, conversely, hoped to join — and thereby unify — an independent Ireland. The violence between the two sides escalated dramatically in the 1970s and stayed that way until 1999, when the Good Friday Agreement quelled some of the tensions. (There’s much more to it than that, however, and presenting such an oversimplification makes me a bit queasy.)

Ní Dochartaigh is from Derry, the second-largest city in Northern Ireland and the scene of much of the Troubles’ bloodshed (and the setting for the Netflix hit “Derry Girls”). When the author was a child, a soldier was shot in front of her. When she was a preteen, her home was gas bombed. Ní Dochartaigh’s family splintered after that, and the experiences fractured her sense of wellbeing as she entered adulthood. Accounts of substance abuse and struggles with mental illness — both the author’s and her peers’ — litter the pages of the book.

The memoir jumps around in time, opening shortly after the 2016 Brexit vote, when ní Dochartaigh is in her 30s. As the U.K.’s break from the European Union looms, old divisions have bubbled to the surface. Bricks and pipe bombs are once again part of the Northern Ireland landscape.

Selfishly, I wanted to review Thin Places partly because the title concept has always given me goosebumps. In Irish folklore, it refers to areas where the physical world and the spirit realm meet. Derry is a thin place, sitting on the southernmost border of the northern counties. And it could be argued that ní Dochartaigh herself is an embodiment of the idea. Protestant and Catholic; raised amid concrete but drawn to wild things. Even the prose in Thin Places hovers in the in-between of lyric and narrative.

The memoir’s evocative style is riveting, layering images of the natural places where the author finds solace with the urban spaces where she lives most of her life. The style is similar to Terese Marie Mailhot’s memoir, Heart Berries. Both books are page-turners that manage the delicate tightrope walk between poetry and prose.

The second reason I wanted to read Thin Places was to better understand the Troubles and to see what lessons could be taken from it. As America strains at the seams of its division, I sought to know how ordinary people — living amid sometimes deadly strife — persevered, found community, and kept making art.

I also hoped to comprehend the divisions created not by where we live but by how we see the world. Just as in Northern Ireland, the current tribalism in the United States isn’t dictated by geographical borders. We live in the same towns, on the same streets, even in the same homes with people whose understanding of reality is so different from ours that it tears us further and further apart.

Still, while Thin Places provides enormous insight into the Troubles and human nature, it left me with more questions than answers. While this was frustrating, I know polemics and easy solutions would’ve rung hollow. Uncertainty is far more honest — and more fun to wrestle with on the page. Perhaps, then, what Thin Places ultimately leaves us with is the courage to speak the unspeakable, even if our voices shake.