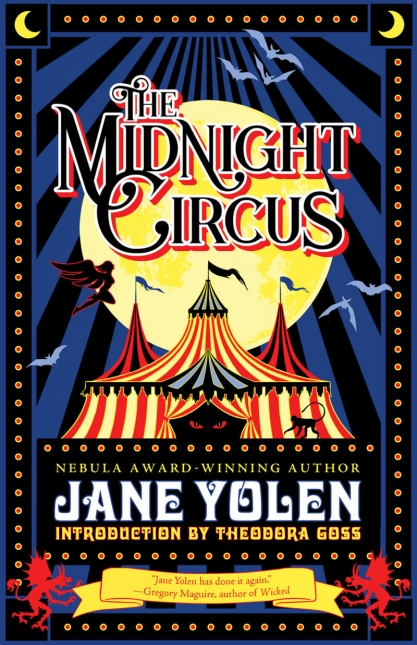 The Midnight Circus is the latest dark and trippy collection from award-winning author Jane Yolen. From her first novel in 1969 to this phantasmagorical assortment of stories and poems spanning the 1970s to 2020, she has amassed an eye-popping bibliography of over 370 books.

Yolen is often dubbed “the Hans Christian Andersen of America,” but that should not be misunderstood. Her work is not Andersen Americanized: sanitized, watered-down, Disney-fied. It is true to the real tradition of Andersen: mesmerizing, haunting, and often not for the faint of heart.

This collection teems with Yolen’s weird, folkloric verve. Her menagerie of stories is distilled from a cauldron of fairytales, legends, and history, featuring everything from selkies to shapeshifters; witches, weavers, and warriors; and angels murderous to ravenous. Her foreword and endnotes offer additional context for the work, creating a satisfying — if often unsettling — reading experience.

Although she draws from conventional roots, Yolen has a talent for mashing up traditions to create something entirely her own. Her story “Requiem Antarctica,” for instance, a collaboration with Robert J. Harris, combines the history of Robert Scott’s fatal 1912 Antarctic expedition with vampire lore to craft a creepy new whole.

The narrative unfolds as an intriguing tale within a tale, an homage to the tradition of Heart of Darkness, or perhaps more fittingly, Mary Shelley’s Frankenstein, with its climax in a frozen wasteland and a deathbed confession via letter. Indeed, in her foreword, Yolen lists the latter as a favorite to re-read, anointing Shelley the “Mother of Gothics.”

“Wilding” is another notable story with a zestful approach to danger. In a New York of the future, teenagers flock to Central Park to go wilding, a form of entertainment in which they are temporarily transformed into various types of animals allowed to roam freely in the park.

Yolen deals with the horrific real wilding that has occurred in the park by defanging it in a fantastical way, turning it into a controlled, safe activity that allows teens to let off steam. She immerses readers in the language and culture of her imagined youth in a manner reminiscent of A Clockwork Orange: wearing green makeup, riding the “torp” (or “torpedo train,” the subway of the future), sneering at “woggers” hanging onto the straps and being “uncoolish.”

Once at the park, some of the teens become entirely non-human, others run around in an in-between stage, and all are meant to wear a collar for safety. Our plucky protagonist, of course, doesn’t — and we bite our nails to see what will happen next.

Without giving away too much, “Wilding” is indicative of the first half of The Midnight Circus, which skews lighter than the second. In more than one story early on, young characters face danger and find their way, and there is often a touch of humor in their outlook.

The second half of the collection goes darker, to the extent that I might suggest a trigger warning. The threats that tingle our spines in the first part of the book suddenly become real: Killers are not thwarted, and not even children are spared from physical and sexual abuse and death.

“Dog Boy Remembers,” for example, is an origin story in which a half-dog/half-boy and his mother are menaced and abused by a Red Cap, which Yolen explains is “a particularly nasty kind of murderous gremlin who dips his hat in the blood of his victims.”

In “Become a Warrior,” a girl disguises herself as a boy to escape the enemy hordes after her father and brother are killed in battle, leaving her mother and sisters behind to be ravaged. She grinds out a hardscrabble existence until she can no longer hide her gender, then flees and leads a solitary life in the forest, until one day she’s discovered by…

Well, I won’t tell you the rest, but it’s pretty sunless. And yet, even in the darkest tales, Yolen tends to mete out a rough sort of retribution: a murder is avenged, a protagonist emerges tougher and more resolute than before. Despite this bleak landscape, there is still a manner of victory. We walk away from these later stories with a grim sense of redemption, a sobering shift from the delight of the earlier offerings.

Not that it’s all gloom and doom. There are enough powerful weavers, witches, and revenge against patriarchy to warm the cockles of a reader’s girl-power heart. And “An Infestation of Angels” is a brilliantly off-kilter retelling of the biblical Exodus story in which the leader of “the People” has to figure out how to convince “faró” to let them out of their work contract so they can escape an infestation of stinking, carnivorous angels in “the land of the Gipts.”

Yolen titled her foreword “Who Knew I Was a Writer of Dark Stories?” Should you choose to venture beyond this sign at the entrance to The Midnight Circus, don’t say you weren’t warned.

Tara Campbell is a writer, teacher, Kimbilio Fellow, and fiction editor at Barrelhouse. She received her MFA from American University in 2019. Previous and upcoming publication credits include SmokeLong Quarterly, Masters Review, Wigleaf, Jellyfish Review, Booth, and CRAFT Literary. She's the author of a novel, TreeVolution, and two collections, Circe's Bicycle and Midnight at the Organporium. Her newest book, Political AF: A Rage Collection, was released by Unlikely Books in August.