A woman’s journey from call-center worker in Mumbai to successful American Desi is told in linked stories. 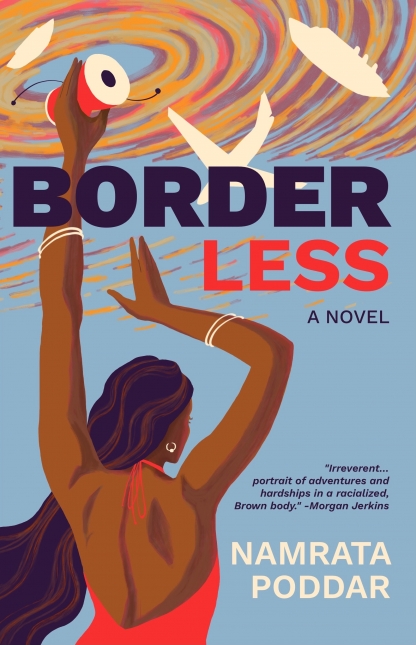 During her last year of college, Dia Mittal works at a Mumbai call center to support her family, but she has greater aspirations. She and her boyfriend, Aziz, plan to work their way up to supervisor status and save enough money to pay for an MBA program in the U.S. “Both came from lower middle-class backgrounds, both knew life in survival mode.” Most important, “They had a good ability in switching accents.”

However, Dia also longs to express herself through the arts — particularly dance and painting — and interviews at a prestigious Mumbai art school. She’s willing to abandon her dream of America to pursue an intersectional study of the history of the frescoes of Marwari havelis in the Thar Desert’s Shekhwati region. But she is quickly dismissed as an outsider interested in outsider art, and thus is set upon the course of migration.

The cover of Namrata Poddar’s debut work of literary fiction, Border Less, proclaims it is a novel, but I would classify it as linked short stories, with some of them, such as “Excursion” and “Victorious,” first-person interludes featuring characters who do not reappear. This is not the only way the book eschews mainstream literary convention to stand proudly as a work that makes its own rules.

In another unconventional move, foreign words, cultural references, and other details unfamiliar to the average American reader are left unitalicized and undefined. Rather, they are incorporated into the English text in the hybrid language of an immigrant culture. Song lyrics, Bollywood movies, food, holidays, deities, regional accents, and so much more proliferate with no explanation of their significance to the reader unfamiliar with Indian and Indian American culture.

This forces the reader to pay attention, which they should be doing anyway, and deduce meanings through context clues and a little imagination. If the reader is so motivated, she can look up some of the words later, as I did lehenga and haveli, but it’s not necessary for the understanding of the action, plot, or themes.

Which is not to say that her Desi experience is not without profound conflict. The further she gets from her Mumbai roots, the more she rebels against the strict gender roles that second- and third-generation Indian Americans still abide by. Even as the women become successful and accomplished wage earners, they continue to do all the cooking, cleaning, and childrearing while their husbands watch the Lakers and consume their wives’ and mothers’ never-ending offerings of food, drink, and household labor. Dia becomes more outspoken, clashing with elders. When she returns to India, she finds herself an outsider in her birthland, a stranger among blood relatives.

The culminating story, “Kundalini,” is a defiant, oracular pronouncement of the feminine creative force against men who seek to silence women, from the vindictive king of One Thousand and One Nights, who sets out to slaughter all the virgins in the land to assuage his ego in the face of his wife’s perfidy, to “the oldest heir to the white man’s burden, the gatekeeper to literary diversity” (oh, how I cheered to read that passage), to the privileged husband who allows his wife to bear the brunt of society’s unequal expectations.

Told in the voice of Shakti, “I who own that ancient game of Form and Illusion,” the story is an anthem to the irrepressible power of female creation, which cannot be kept within the artificial borders men have erected to perpetuate the delusion that women are their inferiors.

Alice Stephens is the author of the novel Famous Adopted People, editor of Bloom, co-founder of the Adoptee Literary Festival, a book reviewer, and a columnist for the Independent.