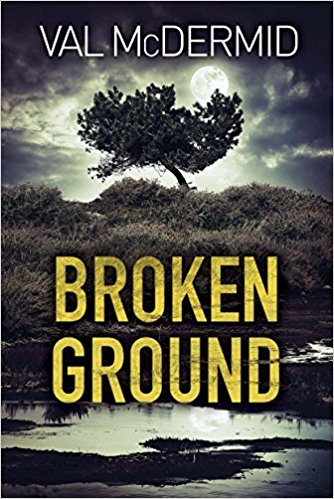 I have always found that a skillfully constructed murder mystery has much in common with the game Jenga. At its base lie the underpinnings of the structure: the truth, the killer, the who of the whodunit. Each piece on top is a clue — sometimes convoluted or misleading — that must be carefully extracted from the narrative as the book races toward its conclusion. The author is the builder of the tower; the reader, the dismantler. Each must be fully engaged.

Without doubt, Val McDermid is committed in her attempt to entice the reader into the narrative of Broken Ground, the latest installment in her Karen Pirie series. At its core, a fascinating story exists, the plot moving between 1944, when a crime is committed, and 2018, when it is discovered. As the narrative travels across space and time, it displays McDermid’s laudable efforts to immerse readers in particular locales and eras.

The author creates an atmosphere of authenticity. For instance, the mannerisms and speech of characters in 1944 ring with historical believability. In the present, Scottish locals speak with a brogue. (While bordering on stereotypical, this texture adds to the realism.)

The story also lingers lovingly on the bucolic scenery of rural Scotland. In fact, the poetic descriptions of the landscape are some of the most enjoyable portions of the book.

Unfortunately, the above-mentioned pieces are the strongest in an otherwise poorly constructed tower. While McDermid crafts vivid images, her novel falls apart from the first few chapters. Readers are given too many clues, rendering the murder and its motives too obvious. The riddle is diluted, the excitement that comes from trying to solve it washed away. This makes the remainder of the narrative a bit tedious, even grating.

The characters share the same fate as the plot: The idea and the background are solid, unique, and fascinating, but the execution is lacking. For instance, the story introduces too many figures who appear for a few pages before dropping off, never to be heard from again. Granted, perhaps they’re “Easter eggs” for fans or setups for later novels. In Broken Ground, though, these random appearances halt the pacing of the book.

Conversely, the stable characters are people in whom the reader wants to invest. Karen Pirie may be a bit like a hundred other detectives, but she is interesting regardless. Her smart mouth and insistence on jumping headfirst into situations make her occasionally ridiculous, yet also enviable and relatable. She blows past obstacles and red tape with a determination that makes readers want to cheer for her. The issue is that she, as does almost everyone else in the story, has speech patterns that make her utterly unrealistic.

Much like the dialogue, clichés are so worn that readers are left waiting for punchlines that never materialize. When an experienced detective non-ironically says, “I intend to find out who. And why,” at the end of a chapter, the unwritten Dun Dun Duuun! practically unfurls across the page. It’s clumsy, and McDermid can do better.

Sometimes, even the narrator tries too hard, obliterating the rule of “show, don’t tell,” such as in this description of Karen’s cold-hearted, unflinching grin at a suspect: “It was the kind of smile that makes small children whimper and cling to their mother’s legs.”

With full knowledge that I have employed here an extended metaphor revolving around a kids’ stacking game, I cannot help but shake my head at the overwrought metaphors and similes peppered throughout this story. The “telling” part of this mystery is so heavy-handed, the book should’ve come with a mallet.

On a separate note, of particular irritation is the bitter feud between the only two important female characters. The rationale for the grudge — that a man chose one of them over the other — exacerbates the cringe-worthy situation. Given each woman’s powerful position and usual levelheadedness, the conflict feels extraneous and absurd.

Broken Ground does just enough to raise up its tower of blocks, but it’s an unstable, rickety construction. Read it for fun on a cold winter night — but don’t be surprised when it all comes tumbling down.

This ambitious would-be thriller leaves too many questions unanswered.