The Cabaret of Plants

A fascinating, compulsively readable look at the lives — both outer and inner — of the flora all around us. 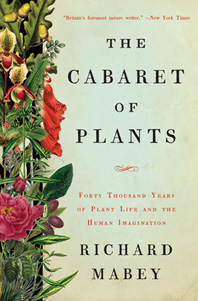 An orchid that flowers entirely underground. A rainforest vine that closely mimics the leaves of each tree it encounters, changing leaf shape, size, and color within the space of a few yards on the same vine. Passionflowers that have developed a back-and-forth competition with the zebra longwing butterfly to outsmart the other, with the current advantage going to the passionflower, which produces growths on its leaves that resemble butterfly eggs in a botanical “No Vacancy” sign.

We are treated to these wonders and many more in The Cabaret of Plants. Its subtitle, Forty Thousand Years of Plant Life and the Human Imagination, perfectly sums up this gorgeous and engaging book from British naturalist/author Richard Mabey. A prolific writer, Mabey specializes in delivering accessible, thought-provoking discussions of plant life as it intersects with humanity, as he did in his 2011 book, Weeds.

In Cabaret, Mabey muses that we humans cannot think of plants without using ourselves as a frame of reference. While many people regard animals as beings in their own right, worthy of compassion and respect, there is little of that impulse toward flora.

Mabey worries that modern thinking considers plants purely in terms of their economic value, “defining plants as a biological proletariat, working solely for the benefit of our species, without granting them any a priori importance.”

The author isn’t here to scold his readers, but hopes to make us think “about plants as authors of their own lives,” and tells us, “Most of my own personal encounters with plants…have confirmed this conviction that plants have agendas of their own.”

Cabaret is organized into sections by subject or theme, and each of these has multiple chapters. Every one of them is fascinating. Mabey mixes history, science, and anecdote in roughly equal parts to compulsively readable effect.

The chapter “The Challenge of Carnivorous Plants: The Tipitiwitchet,” for example, describes the early investigations into the why and how of carnivorous plants such as the Venus flytrap and the sundew, but spends as much time on the search for the name’s origin. Rather than being Native American, as first thought, tipitiwitchet is a bit of ribaldry, likening open “flytrap leaves — a pair of moist, red semicircles fringed by hairs, which remorselessly gripped their hapless prey” to female genitalia. A glance at the accompanying color plate, painted in 1847, makes that association hard to refute.

Though the book is wide ranging, it spends most of its time in the Europe and America of the 18th and 19th centuries, eras in which scientific discovery, romantic ideals, and the inculcated Judeo-Christian beliefs in the proper order of things mixed in a heady, disorienting brew.

It’s worth being reminded of the simple, everyday tools that people like Joseph Priestly, Charles Darwin, and Isaac Newton — all of whom Mabey accurately describes as “pre-professional scientists…the last non-specialists” — used in making their discoveries, the most important of which was close observation.

“Unravelling the process of photosynthesis in plants was arguably the most important development in the history of biology,” and Priestly did it with a bell jar, a bowl of water, and a mint sprig.

When it came to having a general fascination with plants, no one beat the Victorians. These folks had the deep and abiding curiosity about plants that Mabey would like to see reignited in modern-day thought, but that curiosity led to rapacious demand to possess the plants that most excited them, much to the detriment of the plants themselves.

It is painful to read about the plunder caused by the Victorians’ love affair with ferns and orchids, in which huge trees were felled to get at the epiphytes living high in the canopy, orchid varieties were purposely destroyed in order to keep supply low and prices high, and most plants didn’t survive anyway because the orchid hunters didn’t bother to note the particulars of the native environment in which the plants grew.

Not everyone loved orchids, however. Darwin in particular found them frustratingly inefficient. In the endlessly inventive reproductive methods plants have evolved to overcome their immobility, few can compete with the jaw-dropping variety of orchids, many of which use insects’ sex drives to help themselves along.

But even Darwin couldn’t argue with success. When he found a Madagascan orchid with an exceedingly deep well in which it held its nectar, Darwin intuited that there must be a Madagascan insect, probably a moth, with a tongue long enough to get at the nectar and serve as the orchid’s cross-pollinator. Finally found after Darwin’s death, the moth, with its 12-inch-long tongue, was dubbed in his honor “the predicted one.”

There are so many delights to be found in Cabaret — from the hunt for the elusive Amazonian moonflower, to the wonder of self-rejuvenating yews that defy efforts to determine their age, to the sprouting of an extinct Judean palm from a 2,000-year-old excavated seed — and Mabey keeps us enthralled from first to last.

He leaves us with a description of the fallen Queen Beech of Hertfordshire, which tumbled in a 2014 storm after dominating its site for 400 years. He muses, “Trees are used to catastrophes, big and small. They have been tacking around them for millions of years.” The message is clear: Plants in no way depend on us to survive and thrive; we would do well to remember that we depend on them.

The Stowaway: A Young Man’s Extraordinary Adventure to Antarctica

The winning tale of an intrepid teen and his burning desire to see the world’s coldest continent.