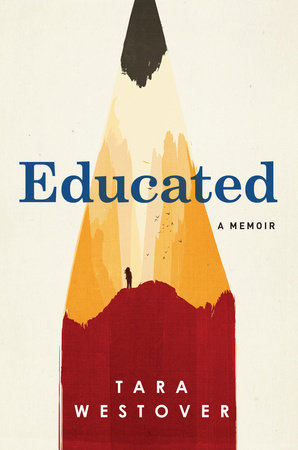 Have you ever had a scab that you picked, and it never healed? Instead, you were trapped in an endless cycle of picking, bleeding, and pain? That’s the case with Tara Westover, only her scab isn’t physical. It’s her family.

If writing memoir is not the picking of the scab itself, it’s only partly the healing, another rendering of the obsessive cycle. That may be why people love memoir generally, and (I expect) why they will love this one in particular.

Let’s start with the cuts. Westover was born the seventh child of unstable parents who cling to their religion and reject the modern world. The first three of her siblings had birth certificates, but the last four didn’t. None of these latter children were sent to school, either. By the time Tara came along, “home-schooling” meant she worked with her father in his perilous junkyard on a mountain, Buck Peak, in Idaho, and in her mother’s kitchen boiling home remedies.

As people who believe that God controls everything and heals when He wills, her father is shockingly careless in the junkyard. Westover details horrific, avoidable accidents (one brother’s finger is lost, and his arm is damaged by mechanical shears; another severely burns his legs and feet when his jeans, soaked in gasoline, spark into fire).

They all go running in to see their mother, who plays superstitious games and applies homeopathic ointments to amputations and third-degree burns. Tara has her turn when her father demands that she stand on top of an empty metal dumpster and unceremoniously drops two tons of rusting scrap into it. Ten-year-old Tara’s knee is impaled by a spike, but she breaks free and crashes 15 feet to the ground.

“Dad examined the gash in my leg…It looked like a pothole…‘Go on home…Mother will stop the bleeding.’” Her mother uses her “Rescue Remedy” on Tara’s wound. She also notices a bruise on her daughter’s back, “a patch of deep purple the size of a human head.” She tells Tara, “You’ve damaged your kidney…We’d better make a fresh batch of juniper and mullein flower.”

Tara, having no recourse but to try to square the circle of her parents’ beliefs and behaviors, insists that she wants to go to school. “I’ve prayed, and I want to go.”

Her father pauses in his nightly reading of the Bible to say, “You remember Jacob and Esau?” That’s the only resistance he offers, but, Tara writes, “I knew what the story meant. It meant I was not the daughter he raised, the daughter of faith.” By going to public school, she would “sell my birthright for a mess of pottage.”

When Tara enters school, she is an outcast. It doesn’t take long for her father’s pressure to bring her back to the maddening house, to work in the junkyard. Here, the pattern emerges: Tara realizes the distorted quality of her life and seeks to get away, but her engagements with the secular world are discouraging. She is given great independence to work in town, but her relations with regular people are strained.

Tara’s elder siblings also have contorted relations with the world. Her eldest brother, Shawn, returns from his attempt to break away from the family and cultivates a fondness for Tara which turns into sickening head games and violent abuse. At the drop of a hat, Shawn goes from decent and loving to utilizing his martial-arts skills on his defenseless sister, twisting her wrist and running her into the bathroom to shove her head into the toilet.

Somehow, Tara finds the drive to continue her education. Although she never graduates from high school, she applies to — and is accepted at — Brigham Young University. Her time in college is a repeating pattern of fleeing, feeling disconnected in the outside world, and returning home in hopes that something there will change.

Meanwhile, Tara’s professors discover her aptitude is equal to her drive, and they encourage her to spend a summer studying in England, where she eventually earns a master’s degree. Still, her successes only exacerbate the cutting, scabbing, and picking. She frequently wakes up to her own screams in the middle of the night, to find she has unconsciously run into the street.

Torn and confounded, she returns home yet again to find that nothing has changed, except Shawn has married and lives elsewhere on the property. When she summons the strength to confront her parents about her brother’s abuse, they don’t believe her.

There is, however, some hope. Tara honestly lives the life that she wants, and it brings her closer to various relatives whom her parents have shunned because of their disbelief. But the background is always there, a cut, a scab, and the endless compulsion to pick at it. Sound familiar?

Because Tara had to fight to break free from her family’s limiting influences, Educated will be an inspiration to some. Her storytelling, characterizations, and dialogue are strong. Any sensitive reader will respond to the hopefulness of her academic and literary achievements (including earning a Ph.D.).

And yet, everybody in every family (even in the best of circumstances) has the challenge of establishing a singular identity against a lacerating background. This book has what modern memoir promises (a cut, a scab, and the endless compulsion to pick at it) but, in the end, that formula doesn’t guarantee resonance.