The Fall of the Ottomans: The Great War in the Middle East

This history gives voice to Arab and Turkish witnesses to World War I and the eradication of an empire. 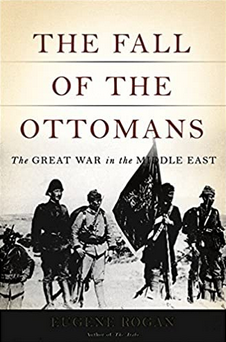 There’s never been much love lost for eastern fronts. East, after all, is a direction in which the notional West has trouble thinking. Today the thought of Middle Eastern war is a shabby jack-in-the-box: a rote, unpleasant surprise at regular intervals. It’s the conflict zone that, to steal from Eugene O’Neill, has in the Western imagination “no present or future — only the past happening over and over again.” And so arriving in that context, Eugene Rogan’s new The Fall of the Ottomans is both the history of a World War and the biography of a cliché.

Appropriately, Rogan opens his book with a bit of genealogy: “Lance Corporal John McDonald died at Gallipoli on 28 June 1915. He was nineteen years old, and though he wasn’t to know it, he was my great-uncle.” This seems about right, analogically: Rogan’s Great War in the Middle East is a distant relative to what military historian Andrew Bacevich calls America’s War for the Greater Middle East.

But Rogan is much less interested in that familiar European perspective than in elided Turkish and Arab views of the First World War and its repercussions. As he points out in his introduction, the war has been wallpapered with British names: “Gallipoli was ‘Churchill’s debacle’; Kut al-Amara was ‘Townshend’s surrender’; the Arab Revolt was led by ‘Lawrence of Arabia’; it was ‘Maude’s entry’ to Baghdad and ‘Allenby’s conquest’ of Jerusalem.” The book targets a certain inequality of memory.

This Rogan addresses nicely. The bibliography boasts a creditable number of regional sources, the text a healthy collection of regional voices. These make for some of the book’s most striking images, as with a Turkish major who records European corpses “lined up like rows of broad-beans” on the beaches of the Dardanelles. Affecting, too, is the cry of a Medina garrison commander refusing to turn over that holy city (now in Saudi Arabia), insisting, “I am an Osmanli. I am a Muhammadan. I am the son of Bali Bey, and I am a soldier.”

As Rogan records, the Ottomans didn’t evacuate Medina until 10 weeks after the war’s end. Its loss was hardly the worst humiliation the Empire suffered; still, the fine rendering speaks to Rogan’s feel for the force of embarrassment. Shame and sense of injury emerge as powerful themes on World War I’s eastern front, as in familiar accounts they do in the West. Rogan negotiates this territory with a commemorative spirit — the attitude of a conservationist, really.

In the early pages, he notes the crash of an Ottoman aircraft and the death of its pilots: “Fethi Bey and Sadik Bey were laid to rest next to Saladdin’s tomb in the Umayyad Mosque of Damascus, Turkey’s first airmen to die in military service.” Deaths are recorded, remembered. This attention to detail can be exhausting, but it also feels satisfyingly total — restorative even. The result is a fresh and meticulous portrait of the Ottoman Empire: modern and modernizing, then declining, and eventually kaput.

It’s admirable that Rogan doesn’t indulge the rush to relevance that disfigures so many histories of the region. Policymakers shouldn’t read this book for strategic lessons (the worst and most callous kind of reading). Rogan sounds frustrated by the way “Sykes-Picot” — the secret agreement laying out the postwar British and French spheres of interest in the region — has become a sniffy sort of origin story for Middle Eastern dysfunction. “In fact,” he writes, “the map as drawn by Sykes and Picot bears no resemblance to the Middle East today.”

The Islamic State of Iraq and al-Sham doesn’t haunt this account; when it arrives in the concluding pages, it arrives like an uninvited guest, rudely intruding. Instead, the present tends to shine through little cracks in the past, where old orders are just beginning to come apart at the seams. In an unpleasant little glimpse of modern, violent iconoclasm, that defiant general in Medina “locked himself into the Prophet’s Mosque with crates of ammunition and threatened to blow up the sacred shine rather than surrender.”’

There’s a danger natural to military histories: Readers will want to make them useful. Ditto accounts of statesmanship, diplomacy, and the like. This impulse is to be resisted at all costs, and The Fall of the Ottomans flies defiantly in its face. Sir Michael Howard famously wrote, paraphrasing Jacob Burckhardt, that the point of history is not “to make men clever for next time; it is to make them wise for ever.” In this respect, Rogan has produced a foundation for wisdom and a record that resists conscription by the clever.

Meticulous, The Fall of the Ottomans rebuts the image of the Middle East as “a land without ancestors and without memory,” as Albert Camus described Algeria (an Ottoman regency, for what its worth). I have to hope the book will make its way into Turkish and Arabic translation too, since, Rogan notes, “The centenary of the Great War attracted little commemoration in the Middle East.” This history is all the more essential for it.

Grayson Clary lives and works in Washington, DC. He has contributed to the Millions, the L.A. Review of Books, and the New Inquiry, among other outlets.