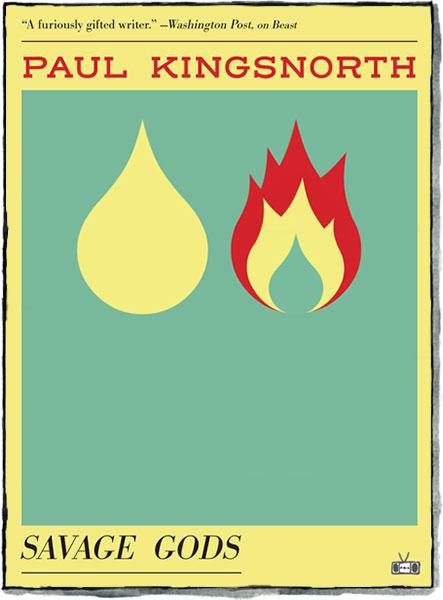 Very seldom do we evaluate our own constitution until, suddenly (and with desperation), we find ourselves rootless, inexplicably lost, and living on a smallholding in western Ireland, wondering what the hell life is all about.

At least, such is the case for author and environmentalist Paul Kingsnorth, whose curiosities, all of which are entertained in his new memoir, Savage Gods, consume him with a verve so voracious that even a breath of air might become, for him, a source of doubt and wonder.

At the pulse of Savage Gods beats a writer grappling with the potency of words and a yen to fashion new grounds of sanctity in a world he has yet to fully discover. But to what extent can truth and reality be captured by a tool as equivocal and ever-changing as words?

“Can words, can writing,” asks Kingsnorth, “bore a hole through this dimness? Sometimes, more often each day, they seem like a veiling, not a revelation.” He pursues these questions with the ferocity of a man trying to rediscover his soul, and he dissects everything he’s learned to find it.

Some people might sit down to grapple with such issues in an affordable apartment in the suburbs. But Kingsnorth goes all in and moves his wife and two children to a small farm in Ireland, not far from the River Shannon.

Yet, in his attempt to find contentment, Kingsnorth grows even more restless and less aware, unearthing more questions than answers. He imagines himself a wanderer through words and worlds, he explains, destined to serve the so-called savage gods that demand he describe what he observes of existence.

Once, while listening to a yellow-bellied thrush serenade the rising dawn, Kingsnorth gets frustrated:

“I would stand on the porch and listen and tell myself to give him the correct quality of attention. The Earth, says the French philosopher Gaston Bachelard, wants to be admired by us. Rilke agrees: ‘Everything beckons us to perceive it,’ he tells us, ‘whispers at every turn, Remember me.’ Does the thrush want me to perceive it, to admire it? Does the world want to be remembered? Don’t we all?”

These musings read like journal entries from a practiced scholar, as Kingsnorth references everything from the writings of D.H. Lawrence and Dante Alighieri to the works of cultural ecologist David Abram.

At one point, he deconstructs the moment he believes the written word transformed from rootedness to abstraction. Unlike the langue we currently use, he notes, there was once a language used to represent concrete beings. The letter A, Kingsnorth posits, “may once have represented the shape of an ox’s head; O may have been an eye; Q the back end and tail of a monkey. But once Semites got hold of them, turned them into abstract symbols and wrote them down — with the Greeks later finishing the job — the link between culture and nature was finally lost.”

The world is plagued by ambiguities because we construct our worlds with ambiguous tools.

But Savage Gods isn’t just for literary types. The book is self-consciously shaped by, and susceptible to, the questions we convince ourselves we already know the answers to — including those surrounding nature, our sense of belonging, deities, and the biggie: the meaning of life.

Kingsnorth delivers a refreshing reminder about how little we know about what we think we know; as Philip Roth wrote in American Pastoral: “That’s how we know we’re alive: we’re wrong.”

And maybe it’s beautiful to be wrong; without misguidedness, there would never be a path forward or sideways toward something else. This isn’t comforting, but at least it delivers us from the dark woods we once wandered.