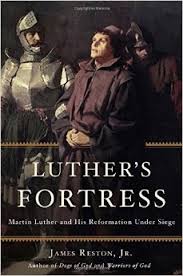 Martin Luther described his ultimate fortress in his hymn, “A Might Fortress Is Our God.” James Reston Jr.’s book describes the months Luther spent in a lesser fortress, a castle with a drawbridge: the Wartburg Castle in central Germany.

After Luther refused to recant his criticism of the Catholic Church, the Holy Roman Emperor Charles V declared him an outlaw. Already excommunicated from the church, he could now lawfully be killed anywhere by anyone. For Luther’s protection, friends spirited him away to the Wartburg Castle, where he lived disguised as a German knight.

Reston calls Luther’s time in the castle — May 1521 through February 1522 — the “most intense” period of the reformer’s life. The book’s most intense part comes at the end, when Luther leaves his fortress, not because he is safe — he’s still very much in danger — but because letters had told him that some of his followers were trying to radicalize his religious reform.

For Martin Luther, external trappings made no difference to true religion. Yet at Wittenberg, where he first argued that the Catholic Church had strayed from the faith, zealots were battling to change externals. Mobs stormed the churches, overturning altars and smashing pictures of saints.

When Luther returned to Wittenberg, he preached for eight consecutive days to his confused people. Reston tells how he urged patience and care for the consciences of others. No one can be forced into faith, he said; biblical religion depends upon each person’s being freely persuaded of the truth. Violence should never be employed. Reston notes that his listeners “remarked on his voice. It was sweet, sonorous, hypnotic. And on his temperament: it was kind, gentle, and cheerful.”

Reston largely succeeds in creating a clear picture of the man — not so much as theologian or reforming leader — but as a pastor who cared deeply and intelligently for the persons he led. He tells how Luther wrote letters to friars who fled their monastery. Though they had left because of the religious movement he started, he feared they had acted too soon, “and that later this would implant a troubled conscience in them.”

During Luther’s Wartburg winter, the plague came to Wittenberg. In addition to telling about the letters of counsel Luther wrote from his fortress, Reston describes the pastoral statement he wrote four years later about whether a Christian could morally flee the plague. Luther’s sermons upon his return to Wittenberg were pastoral, and so was the great achievement of his Wartburg months: his translation into German of the New Testament.

“Twenty Seven Books in Ten Weeks.” This chapter title conveys the scope of Luther’s work in translating the New Testament. “With only his Greek and Hebrew texts as physical references, and no library to consult or clutter, delay or confuse his labor, his concentration was total.”

He was determined, Reston says, to translate so that “the common man of the German street or the German mother in her house” could understand the Bible. Thus, for example, Luther did not write “Hail Mary, full of Grace,” as the Latin translated the angel’s greeting to Mary, but instead wrote the German for “God greet you, dear Mary.” Luther brought his enormous scholarly acumen to his translation. He brought also a pastor’s care for his flock’s minds and souls.

Despite all the evidence of Luther’s mindset, the author never uses the religious term “pastor” for him; moreover, Reston fails to acknowledge the centrality of religious faith in everything Luther did. Through most of the book, he sidesteps this problem, focusing on Luther’s words and actions without probing their source.

But the author cannot sidestep when he uses the “fortress” hymn to end his book. In the last paragraph, he praises Luther’s “inner strength” in the Wartburg. “The world had threatened to undo his movement, but he had triumphed.” Then Reston quotes three lines from Luther’s hymn, translated ambiguously enough to sustain this “self-reliance” interpretation.

Luther, however, did not rely on his own inner strength, but trusted that “a mighty fortress is our God.” Reston himself is not obligated to claim any power for religious faith, but he is obligated to report that his subject claimed its power above all else.

A reader who knows little about Luther can learn a lot from Luther’s Fortress and still more by following the suggestions in its “Selected Bibliography.” (The book has no footnotes or endnotes.)

In a concluding author’s note, Reston says that he decided to write the book because Luther had captivated him. Though he misses the depth of Luther’s faith, the author’s attraction to this very religious man nonetheless enables him to grasp Martin Luther’s greatness as a shepherd of souls.