This history of a beloved cuisine is rich in facts but dry as a box of Barilla. 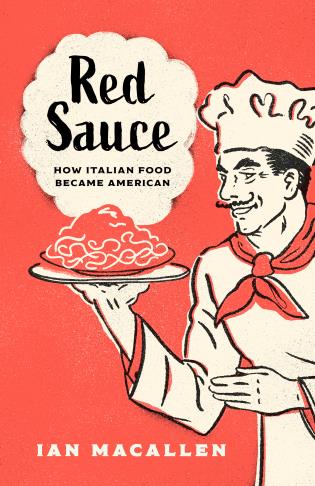 We Americans often take Italian food for granted. There’s a pizzeria on every corner and a red sauce in every pot, while lasagna, spaghetti and meatballs, and chicken parmesan are all part of our country’s gastronomic lexicon.

It wasn’t always this way. It took centuries to integrate Italian traditions into our culinary culture. Red Sauce: How Italian Food Became American aims to map that journey, unspooling a tidbit-filled timeline charting Italian immigration patterns, the importation and interpretation of dishes, and the way the food was both Americanized and became American. Author Ian MacAllen is organized and detail-oriented throughout, attributes that prove to be both a strength and a weakness.

The most enthralling chapter is “One Fruit to Rule Them All,” devoted to the uber-important tomato. Here, the author’s prose is excited and engaged, occasionally saucy and pugnacious. “As with corn, potatoes, and syphilis, Europeans were slow to grasp the significance of the tomato,” he writes. Later, he notes:

“Consumers want fresh tomatoes without imperfections and uniform shape, size, and color. Farmers selecting for these qualities end up producing fruits that look beautiful, have a long shelf life, and taste like cardboard.”

It turns out the history of the tomato is surprisingly bloody. A member of the nightshade family, tomatoes were initially considered poisonous by Europeans — yet were often employed as an aphrodisiac — and associated with the occult. MacAllen notes that as tomatoes were being introduced to Europe, Puritans were overseeing three centuries of dubious executions, prematurely ending the lives of up to 500,000 suspected witches.

“Considering how rarely people accused of witchcraft met with a peaceful end, the hesitation to consume tomatoes seems a logical decision,” he writes with a wry humor that would land even better if it were employed more frequently.

Occasionally, when injecting himself into the history he recounts, MacAllen treads too heavily, creating a head-twitch moment. Did he really just say that? The most notable occurs while discussing the origins of puttanesca sauce, when he notes the name’s root is an Italian word meaning “whore”:

“The legend held that the sauce’s quick preparation allowed sex workers a meal between customers without losing much time, because there is nothing a john wants more than the heavy stench of anchovies and garlic on the breath of his prostitute.”

I’m not sure how we readers are supposed to respond. Um, thanks for taking such a firm stand on oral hygiene?

The book finishes with an evolutionary chart of several iconic Italian-American recipes — including classic marinara, eggplant parmesan, and fettucine alfredo — showcasing how American innovation, ingredients, and indulgence played a role in shaping this intertwined foodway. If you’ve ever wanted to make 19th-century-style vermicelli with pomodoro sauce or pumpkin parm from the early 20th century, now you can. If not, this back matter feels forced and unnecessary.

In the end, unfortunately, Red Sauce is a slog, like trying to finish a Never-Ending Pasta Bowl at Olive Garden. It seems like a great idea at the start but soon becomes a pleasure-less chore.

Nevin Martell is a DC-area food and travel writer, parenting essayist, recipe developer, photographer, and author of eight books, including Red Truck Bakery Cookbook: Gold-Standard Recipes from America’s Favorite Rural Bakery. Follow him on Instagram at  @nevinmartell and on Twitter at @nevinmartell.