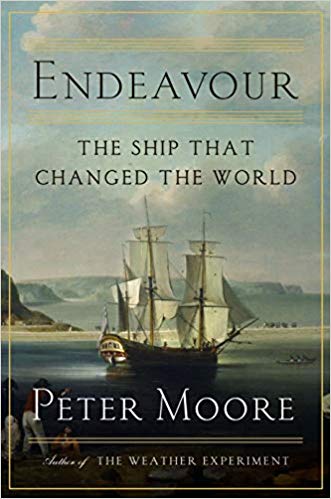 The nominal subject of this splendid book had a lifespan of 14 years and several different names during that time — Endeavour being the most apt, most honorable, and best. But the essence of the story has as much to do with how she touched, albeit sometimes glancingly, various hems of human history as it does the ship itself. The subtitle of Endeavour: The Ship That Changed the World is not subservient; here, title and subtitle are equals.

For a time in midlife, she may have been the noblest thing afloat, but her beginning and ending were humble. She was made in 1764 at the busy shipbuilding port of Whitby, on the Yorkshire coast, to carry coal — a collier. Christened Earl of Pembroke, she was of the type called a “bark.” Flat-bottomed, practical, and plain, she was designed, as author Peter Moore says, “to last rather than to dazzle.”

Two-hundred mature oaks were used in her construction, and Moore begins the book with good explanations of how the oak, a tree dear to the English soul, achieves its great strength. “The more a tree is forced to withstand (i.e., gales, depredations of cattle and deer, and the strife of life in general) the stronger it becomes,” he writes.

(But oak does not stand constant submersion, and near the end of Endeavour’s life, before the bark entered her last, less-than-respectable service against American revolutionaries, significant rot had to be repaired.)

Endeavour’s most-renowned voyage, the narrative of the first half of the book, came under the command of Captain James Cook, on his magnificent first circumnavigation of the earth (1768-71) — around Cape Horn, to Tahiti, touching the places now known as New Zealand and Australia, and back home.

This is the voyage that included the naturalist Joseph Banks and his retinue of assistants and equipment. Banks spent the journey collecting flora and fauna then unknown in Europe. On a ship that had previously hauled coal and been piloted by illiterate sailing masters, Banks was now “working on the very borderlines of human knowledge.”

That Endeavour was chosen for this voyage was a happy accident. The primary purpose of the expedition was a scientific one (including the observation, from Tahiti, of the transit of Venus across the sun), timing was everything, and the Earl of Pembroke was available. For such a monumental undertaking, she was renamed.

Indeed, much of the book Endeavour consists of happy accidents (or, in the author’s better phrasing, “chronological convergence”) — of connections, sometimes tenuous, between the ship and events not apparent until Moore reveals them.

After the Cook voyage, for example, Endeavour was involved in an early effort to provision and defend Britain’s base in the Falkland Islands, east of Argentina — the place that required another British Navy defense in the 20th century.

And Endeavour’s time coincided, roughly, with significant social turmoil in England, some of which was inspired by the rabble-rousing proponent of democracy, John Wilkes, a man who was admired by colonists Samuel Adams, John Hancock, and other (then, but not for long) British subjects.

Wilkes had a fraught relationship with the secretary of state, Lord Sandwich — the same Lord Sandwich after whom, in an evident effort to curry favor, Endeavour was later renamed, before sailing across the Atlantic during the Revolutionary War, where she was anchored and served as a prison. After that, the Lord Sandwich was scuttled at the mouth of Newport harbor — to prevent entry of the French fleet — her final resting place.

A sign of our times is that contemporary history books are weighted heavily with critical judgments about prominent figures based on the assumption that our modern values and morality, higher and more sensitive in every way, trump theirs. These books are products of, as the writer Philip Glazebrook puts it, “the modern school of historians who like to beat their forefathers’ breasts with the cry Vestra culpa!”

Moore’s book charts a course less followed, while still pointing out that Captain Cook’s Endeavour was not and is not viewed as benign by all. Though she is now a national symbol of Australia, and though a piece of her went to the moon, to many in the South Pacific, the ship “has become a powerful emblem of colonialism.”

The book’s ultimate point, though, is well made: The span of the ship’s life, 1764-78, “forms a crucial mini epoch in the development of Western society.” One might add that Endeavour: The Ship that Changed the World is, as its namesake vessel was, all over the place — in a good way.

Mark Gamin is a lawyer, writer, and editor. He is writing a book set in the middle of Idaho, the working title of which is The Middle of Idaho. Physically residing in Cleveland, in his mind, Mark is often at his small farm in Appalachian Ohio, on the very edge of civilization.