The First Wave: The D-Day Warriors Who Led the Way to Victory in World War II

A humanizing portrayal of the men who stormed Omaha Beach. 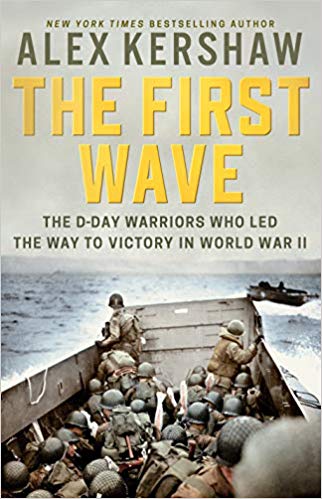 The hallmark of a great writer is one who can keep a reader in suspense while recounting an event whose outcome is already known. Master storyteller Alex Kershaw has done just that in The First Wave: The D-Day Warriors Who Led the Way to Victory in World War II.

This is not a sweeping, panoramic history of senior commanders in 1944 plotting battle strategies. Rather, it’s an honest, boots-on-the-ground tale of men from the United States, Canada, Great Britain, and France who endured combat in what General Dwight D. Eisenhower called “the Great Crusade,” the liberation of Nazi-occupied Europe.

Kershaw’s skill as an interviewer of veterans is impeccable, and he uses it to great effect here. As you read, you’ll cheer on the men portrayed so vividly both as warriors and as human beings. There’s Bill Millen, the Scottish bagpiper who played his instrument from the moment British commandoes stormed the beaches up through a six-mile march to relieve airborne troops at Pegasus Bridge.

You’ll also meet Den Brotheridge, the first Allied soldier to die on D-Day, as well as the Dalton brothers, Elliot and Charles, who came ashore in separate landing crafts and who wouldn’t reconnect until crossing paths in a hospital in England after the battle.

Another personality of interest is Frank Lillyman, an American paratrooper who drops into the night sky over Normandy and then seemingly is in a firefight the instant his feet hit the ground. Lillyman’s 1971 New York Times obituary reads, in part, that he was “much honored as the first American paratrooper to drop behind German lines during the Normandy invasion in WW II.”

While Kershaw didn’t have the luxury of interviewing Lillyman, his account of the soldier’s heroism reads as if he did.

Lest one think this book is jingoist, it is not. In fact, The First Wave is at one level a cautionary tale. It is abundantly clear that, for Kershaw, war is something that makes good people do bad things. He addresses some of the Post Traumatic Stress Disorders that plagued many D-Day veterans, particularly those who didn’t want to kill but had to, nonetheless.

To the author’s credit, he, like fellow WWII historian Rick Atkinson, is willing to expose the atrocities committed by Allied soldiers in the frenzy of combat and its aftermath. While the men of the “first wave” surely helped liberate Europe, the ways in which they did it were often grim and gruesome.

At the same time, Kershaw acknowledges the cause for which the Allied brave gave their lives and celebrates their heroism. In this regard, his book is quite balanced. Kershaw’s warriors were a band of men committed to their cause because they recognized that they were part of something larger than themselves.

Readers who enjoy military history will find this a worthy contribution to the many D-Day volumes that already exist. Like the author’s other books, The First Wave is accessible and, in spite of the horror it depicts, is an enjoyable and exhilarating read.