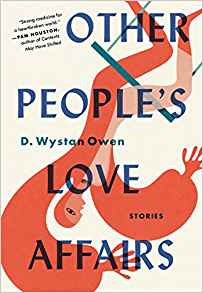 “For twenty years, Erma and Violet lived together in Glass, neither simply as friends nor precisely as lovers…”

Such is the opening line of the eponymous piece in D. Wystan Owen’s book of lovely short stories. Elegant, subtle, even slightly secretive, the sentence draws us in, inviting us to learn more about these women’s unusual relationship.

Unusual relationships are at the heart of Owen’s stories, which delve to voyeuristic depths. From a naive young man drawn to an unhappily married older woman, to a shabby, yet still sensuous former dancer, the characters in Other People’s Love Affairs are strongly reminiscent of Alice Munro’s ordinary — yet by no means dull — affairs of the heart. This is the beauty of both Owen and Munro: They nudge open the door to hidden psyches and invite us to step inside.

It’s tempting to believe that all such inner lives are rich and complex — after all, what are we but our most profound desires and primal fears? Owen, however, suggests otherwise. Many of his stories revolve around men and women who don’t know what they want, or, if they do, are incapable of achieving it. In “What Is Meant to Remain,” a divorced dentist seems almost a spectator to his own life:

“Kenneth had never been close to remarriage. At first he tried to date here and there but found that it only made him feel sad. That he had resigned himself to the split did not mean it hadn’t been a devastation. He had wanted to say that to Alma, if only to acknowledge the loss, but for so long he had been too polite, and now felt that too many years had gone by.”

In “Housekeeper,” an old man’s helpmeet impassively watches him as he suffers a stroke:

“Mr. Harris sat upright in his chair, twitching gently through the shoulders and hips. She watched him, curious, strangely detached: The television light made his face appear pale, but the cheek nearest her was lit warmly by fire. She noted that odd and haunting effect and the lurching, rhythmic motion of him; he might have been a child asleep in a car, traveling over uneven road.”

It’s a testament to the power of Owen’s storytelling that, despite the shortcomings of his characters, we care deeply about them. He asks us to acknowledge their — and our own — humanity. Judge if you must, he seems to say, but don’t imagine you are all that different.

In fact, it’s difficult to find a weakness in Other People’s Love Affairs. If there is one, it’s that some connections seem slightly unbelievable. In “Virginia’s Birthday,” a woman refuses to tell a man that he is the father of her child, despite his many kindnesses to her over the years. Although he himself seems to understand — “Where he had seen love, she had seen coercion…his was an accidental trespass: harm done without malice but done nonetheless” — the reader is left wondering why the single mother of meager means does not at least take advantage of his largesse.

Owen’s writing is so exquisite, however, that it overshadows any such flaws. A particularly moving passage comes from “At the Circus,” a dual narrative about a boy and his aunt: “You made your own way, as best as you could, hoarding memories like lost teeth or old gowns, a space saved inside for the person you’d been: unafraid, unrepentant in a bed by the sea, the body ecstatic, celebrating itself.”

One of the cleverest things about Other People’s Love Affairs is the way the author weaves an overarching theme into his stories in a seemingly effortless manner (although surely it took a great deal of conscious work).

Rather than tying them together with an artificial motif such as love or tragedy, he uses location as a point of reference, associating characters in almost every piece with the fictional English village of Glass.

The variability of each person’s connection to the place is what keeps the association from being trite: While some still live there, others have scattered to distant locales but maintain ties, such as family members or former lovers, to the area. This simple yet masterful technique is effective and engaging.

Easy as it would be to recommend Owen’s book only to lovers of short stories, that would be selling it short. Truly, this book is a worthwhile read for any lover of poetic — and poignant — commentary on the human condition.