The Exact Nature of Our Wrongs: A Novel 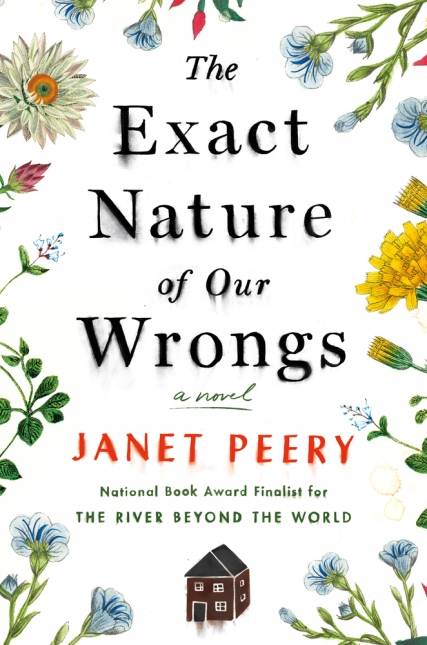 Leo Tolstoy opened his novel about the dysfunctional Karenin family with this famous line: “Happy families are all alike; every unhappy family is unhappy in its own way.” From Tolstoy to Steinbeck to V.C. Andrews, novelists have used the dysfunctional family to gain insight into a society and its culture.

Janet Peery continues the tradition in her second novel, The Exact Nature of Our Wrongs, the story of the Campbell family, whose patriarch, Abel, rules the roost through a strict regimen of domination, bullying, and favoritism. A retired judge, he is used to having the final word and encourages his children to vie for his fickle favor. His long-suffering wife, Hattie, lets him have his way, only challenging him when it comes to their youngest (and her favorite) child, Billy.

Billy is the life of the party, “[a] showboat with flags and bunting unfurled, brass bands playing on all decks, grand feeling on parade.” Except he doesn’t know how to turn the party off, and at middle age, his hard-living ways are catching up to him.

He is HIV positive, but the real threat to his health is his relentless dedication to getting high by any means necessary. In his pursuit of intoxication, he eagerly ingests “[p]ainkillers, black tar, methadone, drink…[c]ough syrup, cigarettes, codeine, cocaine…plus fentanyl patches, morphine, the kitchen sink, and whatever-addictive-else.”

He’s not the only one. In a family of five siblings, just the eldest, Doro, has escaped addiction, save for a cigarette habit she is constantly trying to quit. Not coincidentally, she is the only sibling who doesn’t live in Kansas, where her parents reside.

Of the others, Jesse is a recovering alcoholic, Gideon is a practicing alcoholic, ClairBell pops whatever pills she can get her greedy hands on, and Nick abused drugs until a congenitally weak heart and a tooth infection ended his life in the 1970s.

Rivalries and addictions notwithstanding, Peery presents a warm and funny portrait of a family that bands together when it counts. The catalyst is usually Billy, whom they check into drug rehab, accompany to court to be jailed on a bench warrant, and rescue from the various scrapes he’s always getting himself into. But it is when Abel, stricken with myasthenia gravis and pneumonia, is hospitalized that the family really draws together, each member looking to the past to reckon with the present.

Why are the Campbell children so messed up? Why, when most of their extended family “led sane, serene, productive lives,” was their particular nuclear unit so prone to addiction? According to ClairBell, “Every bit of it was Hattie’s fault; their mother played favorites.” But ClairBell plays the favorites game as well, openly exploiting her father’s fondness for her in order to be bequeathed a chair that all the children covet.

Doro attributes her siblings’ predilections to Abel’s profound moral ambiguity, his “sliding scale of crime, declaring no one above the law and then handspringing over it as though it were a vaulting horse. Her father, talking of how to get around the law, of knowing the law so you knew how to break it.”

The three surviving sons also blame their domineering father for playing the children against each other, brooking no dissent, and belittling his sons for their failure to live up to his own greatness.

But an intriguing suggestion comes in the final pages of the book, as Doro and Jesse are discussing Nick’s early death. Jesse recalls that the night Nick died, Abel gave all the children, even 12-year-old Billy, the narcotic painkiller Darvon to “take the edge off.” Addiction-free Doro somehow missed out on their father’s pill dispensing.

Peery does not give a firm answer on what causes some people to become chronic drug abusers, nor does she offer any moralizing. By presenting her drug-addled characters as aging baby boomers, neither does she glamorize addiction with a glow of youthful indestructability.

Instead, she presents an honest portrait of a complicated family grappling with a long history of bad behavior and tragedy. Though they are dysfunctional, they are not evil-hearted, and even manipulative and self-centered Abel and ClairBell gain the reader’s sympathy. The author deftly reveals the innermost thoughts of seven separate characters, and her pitch-perfect prose makes wonderful use of Midwestern colloquialisms.

As America grapples with a growing addiction crisis, The Exact Nature of Our Wrongs offers a candid and compassionate portrait of a family challenged by drug abuse whose members feud, scheme, argue, and resent, but who always love and forgive. It may be an unhappy family, but it is a loving one, and that saves it from the tragic fate of the Karenins.