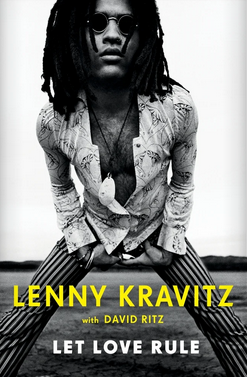 It’s no surprise rocker Lenny Kravitz dedicates his excellent new memoir, Let Love Rule, to his mother, actress Roxie Roker. Best known for her role on “The Jeffersons,” Roxie is the rock upon which Kravitz built an incredibly successful musical career. She, along with a supportive extended family and “aunts” that include actors Cicely Tyson and Diahann Carroll are Kravitz’s secret weapon.

“Their Black feminine energy is one of the reasons I’ve held on to my sanity through crazy times,” he writes.

Kravitz didn’t draw as strong a hand in the dad department. Like something out of “The Great Santini,” his father, Sy Kravitz, frequently criticizes him, is an overbearing disciplinarian, and ultimately sets a bad moral tone as a hypocritical philanderer.

Confronted by Roxie years into their marriage over a series of infidelities, Dad says little to his wife, but turns to his then-teenage son and says, “You’ll do it, too.”

It’s cruel, if prescient. It’s worth noting, however, that storyteller Kravitz does a nice job addressing the grey areas of the human psyche. On several occasions, Sy gets Kravitz out of trouble, loans him money for a project without complaint, or is an otherwise positive force in his son’s life.

Kravitz had the kind of life where, even as his father yells at him to focus more on school and less on music, legendary guitarist (and houseguest) Taj Mahal chimes in and tells the younger Kravitz he’s right to focus on his music.

Kravitz revels in being a Gemini, the zodiac’s master of contrast and contradiction. A rock’n’roller who doesn’t drink and who believes fervently in Jesus Christ, he also goes through periods of major drug use and singing in a classical boys’ choir. Rather than be confused by the contradictions, he feels galvanized by them.

“I owned it,” he writes. “Yins and yangs mingled in various parts of my heart and mind, giving my life balance and fueling my curiosity, giving me comfort.”

Like the Beatles, whom he reveres along with the Jackson 5, he also had a strong inner confidence even in the early days when his career was floundering. Paul McCartney often referred to a “Bethlehem star” that kept the Beatles on track. For example, the fabs turned down the chance to release a likely hit written by someone else as their first single, and they wouldn’t go to America until they had a number-one on the charts here.

Kravitz, too, benefits from a confident inner voice that several times tells him to turn down lucrative, if imperfect, deals — gutsy for a guy without much going on at the time. After an odd phase as Romeo Blue, he ultimately discards that fictional identity to remain true to his vision for himself as an artist.

He also benefits from his relationship with actress Lisa Bonet, already a star on “The Cosby Show” when Kravitz first meets her. She becomes his best friend, his muse, and ultimately his wife and the mother of their daughter, Zoe Kravitz.

His first album, the 1989 classic “Let Love Rule,” had a slow build at first, but it’s his live performances that ultimately put it on the map and catapult him to fame. His hard work and dedication pay off, and Kravitz is gracious in sharing credit with many others.

His memoir ends on an ominous note. It’s as if the wealthy, successful, glowingly happy Kravitz-Bonet couple is celebrating their luck with first-class tickets in hand as they walk up the gangplank of the Titanic.

“My difficulties...were not behind me,” Kravitz recalls of his 24-year-old self on the very last page of Let Love Rule. “They were all in my future. To be continued...”

It’s probably not a spoiler to reveal that Bonet and Kravitz divorce a few years after this volume ends. However, they manage to return to the place where they began: as very good friends.

I suspect Lenny Kravitz’s intelligence, introspection, and dedication to emotional truth will serve him well in the next volume chronicling an amazing life. Clearly, he has some highs and lows to reveal in part two. Luckily for him and us, he possesses the talent and perspective to examine and share that story with a hard-won grace and maturity.