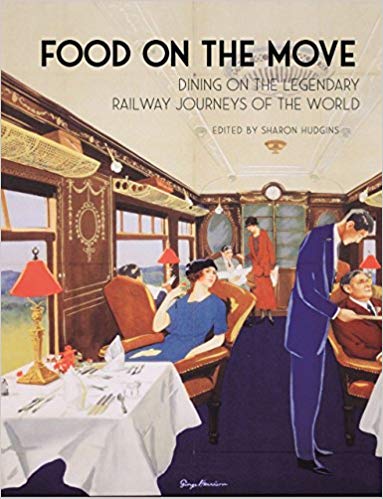 Food on the Move is an uninspired title, especially for a book that presents epicurean dining on some of the world’s legendary railways. Why couldn’t the publisher’s title-meister have devised something more enticing? Maybe Gourmet Getaways around the Globe or Fantasy Feasts on Romantic Rails?

For a book that promises to illustrate the history of elegant cuisine on nine lines across five continents, Food on the Move sounds as mundane as “Meals on Wheels.”

Granted, the book’s emphasis is on food served while one is traversing the glorious mountains on the Darjeeling Himalayan Line or gazing at the staggering outback on Australia’s Ghan Railway, where the scenery seems to be just as spectacular as any menu.

But travelers on particular train lines expect food to be part of the adventure, whether it’s eating boiled cod with egg sauce on the Flying Scotsman, sipping South African wines on the Blue Train from Pretoria to Cape Town, or slurping solyanka (spicy meat soup) on the Trans-Siberian Railway between Moscow and Vladivostok, which, at 6,000 miles, is the longest continuous railway in existence.

The sights described in this book seem as delectable as the 36 mouth-watering recipes presented, which, according to the editor, have all been home-tested. Much of the text is written in the past tense of nostalgia because much of the luxury of railway travel has disappeared as a result of two world wars, the Bolshevik revolution, and the Cold War. During these times, the railways across Europe were disrupted, and many lines suspended operations and changed their routes; others were stripped to provide transport for soldiers and munitions.

The book is best at capturing the pre-war glamour of white-jacketed waiters serving four-course dinners with four flights of wine in wood-paneled dining cars complete with china, crystal, and silver, particularly on the Orient Express, once known as “The King of Trains and the Train of Kings.”

Officially inaugurated in 1883, the Orient Express “made the world smaller” for European royalty, nobility, and wealthy travelers, but that golden age of train travel ended in 1914 with the onset of World War I.

Still, the magic of the name lingered, and the Simplon Orient Express was launched years later to follow the original route from Paris to Istanbul, which attracted writers like Ernest Hemingway, Graham Greene, and John Dos Passos, and, in 1934, inspired Agatha Christie to write Murder on the Orient Express.

As that train left the Gare de l’Est in Paris and traversed Milan and Venice toward Athens and the kingdoms of the Serbs, Croats and Slovenes, the menus changed in each country, and some persnickety passengers objected to the thick coffee in Turkey and the Ouzou in Athens. They far preferred the food in Italy, where a typical dinner began with a clear soup, ravioli, steak tortellini, Bel Passe cheeses, fresh fruit, cassata, and Strega.

Over time, standards slipped on the world’s most famous railway and service declined so much that, by 1975, the travel writer Paul Theroux pronounced the Orient Express dead to discriminating travelers, having been murdered by its lack of luxury and indigestible cuisine. Theroux wrote that the food on the Orient Express was far worse "than the poorest Madrassi train where you exchange stained lunch coupons for a tin tray of vegetables and a quart of rice."

That killed the legendary line until James Sherwood, president and CEO of Sea Containers Ltd., stepped in four years later with an investment of $20 million. He believed that he could revive the illustrious name and the peerless service once provided. And he did — for a while, adding new routes such as Venice Simplon Orient Express, Nostalgie Istanbul Orient Express, Pullman Orient Express, which runs between Paris and London, and the EuroNight Orient Express. But the luxury of the original went the way of once upon a time.

While the years of legendary rail travel succumbed to aviation and high-speed trains, you can still, according to this book, travel in style on various lines, including the Santa Fe Super Chief, Canada’s long-distance railways, and Japan’s Bullet Train, which looks like a great white shark with a royal blue stripe gartering its belly as it shoots down the track at 200 mph.

If your bucket list includes riding the world’s richest rails, but you’ve run out of bucks, this book will provide vicarious pleasure, particularly for foodies and/or train devotees. With its coated-paper pages of semigloss finish, color plates, lovely vintage illustrations, extravagant 20th-century menu reproductions, and photographs, Food on the Move gives you a contemporary report as well as a romantic history of railway travel. And despite its clunky title, it’s a book that train lovers will cherish.

Kitty Kelley is the author of seven number-one New York Times bestsellers. She is on the boards of Reading Is Fundamental and the Independent.