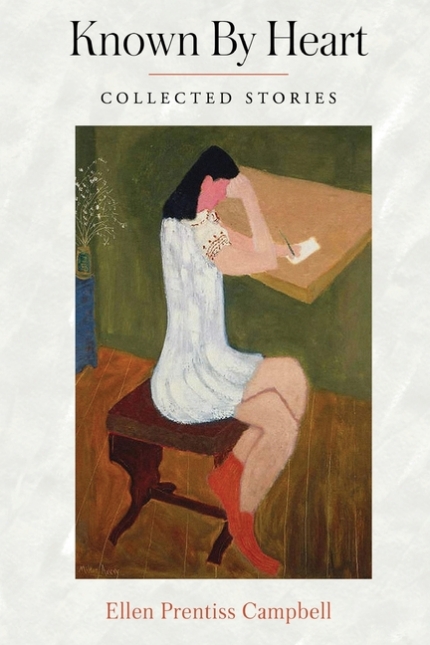 The title of Ellen Prentiss Campbell’s Known By Heart: Collected Stories is an intriguing choice, evoking something memorized or rote. After all, as Robert Frost once said, “No surprise in the writer, no surprise in the reader.”

But in this understated collection of 15 lightly linked stories, some of which appeared previously in publications such as the American Literary Review, the MacGuffin, and Kaleidoscope, Campbell — whose first collection, Contents Under Pressure, was nominated for the National Book Award and whose debut novel, The Bowl with Gold Seams, received the Indy Excellence Award for Historical Fiction — explores deeply universal matters of the heart with crisp, vivid prose.

The situations in which Campbell’s characters find themselves are familiar: the sweetness of young love and the phantom-limb pain of its loss decades later; the gravity of an unplanned pregnancy; the illness and death of a loved one, whether “expected” or a bolt from the blue; the torment of infidelity; the sadness of sibling rivalry.

But as recognizable as these situations are, as much as we think we “know them by heart,” Campbell’s perceptive treatments of them often catch the reader by surprise.

In “Problem Set,” for example, she offers what seems to be just another story of adultery, only to reveal that the man’s wife has been comatose for several years following a massive stroke. Now that he is drawing close to a decision to end life support, his longtime lover experiences second thoughts about how things might change if he did:

“But what would happen to the two of them without Selma? Her absent presence held everything in balance, permitted Joy and Daniel’s relationship to persist; forestalled or at least obscured the likelihood of entropy, of conflict, deterioration, and disorder. Removing Selma would disrupt their closed system, expose Joy’s limited supply of energy and warmth.”

In “Faith and Practice,” another story where the specter of infidelity raises its head, Campbell creates an oh-so-predictably stressed marriage between Dorothy, the childless (and, therefore, goes the implication, passionless), practical, hardworking teacher-wife and her starry-eyed principal-husband, Grayson. When an attractive young student enters the picture, the reader knows it’s just a matter of time before Grayson strays:

“The girl was Miriam Street. Dark hair and dark eyes, she looked like a gypsy in her long skirt made from an Indian bedspread. Her blouse was a skin-tight purple leotard, no bra. Dorothy would have to add underwear to the dress code; it seemed that nothing could be left to common sense or modesty.”

But when the moment between Grayson and Miriam finally comes, Campbell again turns the inevitable upside down with the astonishing ways in which the characters respond.

One of the experiences that touches us all at some point is death, so it’s natural that Campbell would include stories on the topic in this collection, whether the slow, devastating loss of a spouse to (unspecified but assumed) Alzheimer’s, as in the title story, or the shocking, unexpected death of a child in “A Long Time to Be Gone.” In both, Campbell takes something we think we know so well and upends expectations, forcing our attention to return with a vengeance.

Much of “A Long Time to Be Gone,” in particular, reads as just another day in the life of Bonnie, a mother of two daughters. She and her family go about their routines: feeding the pet caterpillar, preparing lunches, watching cartoons, worrying about work, heading to soccer practice. Mundane and predictable until it’s all brought to a screeching halt with one stark line: “A black sedan hurtled toward them.”

Just like that, the things we know by heart are irrevocably changed.

This is, I think, the message Campbell intended with her sharp choice of a title: a reminder — and a timely one, at that — of how easy it is to be lulled into thinking these matters of the heart are somehow unique to each of us, so universal as to seem ordinary, when, in fact, they are the extraordinary things we all share, and the only ones that really matter in the end.

Julia Tagliere’s work has appeared in the Writer, Gargoyle Magazine, and elsewhere, as well as in numerous anthologies, including Furious Gravity, volume nine of the Grace & Gravity series featuring DC women writers. Winner of the 2015 William Faulkner Literary Competition for Best Short Story and the 2017 Writers Center Undiscovered Voices Fellowship, Julia completed her M.A. in writing at Johns Hopkins University. She serves as an editor with the Baltimore Review and is working on her next novel.

A time-traveling teen journeys back to 1860 and learns to live on her own terms.

This collection of short stories is alive with compelling characters and intriguing prose.