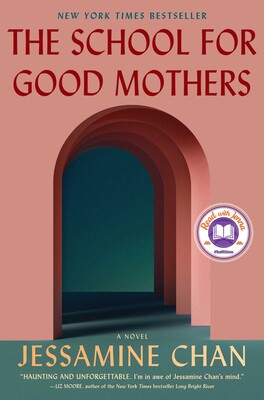 I came of age in the 1970s, starting college in 1980. I had a paper route with my brother when I was 9, and in the summers throughout my pre-adolescent and teen years, it was rare for my mother to know where I was at any given point in the day. In our neighborhood, kids knew to be home by suppertime.

It’s unclear when we fully crossed the line that says parents must now constantly know where their children are, but in today’s landscape, an unsupervised child is, apparently, an endangered child.

Debut author Jessamine Chan examines this idea to chilling effect in The School for Good Mothers. There is plenty of real-world documentation — she has pointed to Kim Brooks’ memoir, Small Animals, as one example — that served as the inspiration for her story of our competitive and judgmental parenting culture run amok.

Frida Liu’s life is not turning out as it was supposed to. The Chinese American woman has given up her New York career to follow her white husband, Gust, to Philadelphia. She is a new mother when she learns he is in the middle of a serious affair that started while she was pregnant. Now Frida is a single parent attempting to navigate a demanding but brain-numbing job, a fussy toddler, Harriet, and the rage-inducing tag team of her ex and his wellness-and-organics girlfriend, Susanna, who has lots of opinions about child rearing.

It is after days without sleep from dealing with her daughter’s ear infection that Frida makes the objectively horrifying decision to leave her 18-month-old alone in a bouncy chair, ostensibly to grab a cup of coffee. This then becomes a run to the office to pick up a file, which then turns into several hours away:

“What she can’t explain, what she doesn’t want to admit, what she’s not sure she remembers correctly: how she felt a sudden pleasure when she shut the door and got in the car that took her away from her mind and body and house and child.”

As the story opens, Frida is on her way back home. Her neighbors, hearing Harriet’s nonstop crying, have called the police. The little girl is already with Child Protective Services by the time Frida checks her voicemail. In one afternoon, her life unravels.

The brilliance of Chan’s approach is to play with readers’ own judgmental impulses, to yank their chains and get them to examine the thought bubble that pops up while they’re reading: “I would never…”

Leaving Harriet by herself for two-and-a-half hours is unforgivable, and Chan explores exactly what unforgivable looks like.

Frida has thoughts that no mother would ever voice out loud, unseemly thoughts that would mark her as unfit. She has resources she could call on for help, but she chooses not to. It’s as if the author invites us to consider all the ways that Frida has brought this onto herself.

After two months of in-home surveillance, observation by a social worker, and evaluation by a psychiatrist, Frida is still judged insufficiently trustworthy. To have any chance of reclaiming joint custody of Harriet, she must submit to a one-year residential program in parenting — the first of its kind. The mantra residents are taught to recite is, “I’m a bad mother, but I am learning to be good.”

Here, they are never unobserved. “In the foyer, she senses the cameras before she sees them, feels a faint tickle, like someone is drawing his fingers across the back of her neck.”

At orientation, they’re told that mothers who quit or end up speaking badly about the program not only lose all parental rights, they are also entered into a registry equivalent to that used for pedophiles. The fence around the campus is electrified.

The nightmare is complete when the mothers are introduced to the AI robot dolls that will serve as their practice children and will record the women’s every pulse rate, eye movement, grip pressure, and response time, ensuring the scientific accuracy of their evaluations. (To be fair, the dolls exhibit far more humanity than the facility’s pink-lab-coated instructors.)

Chan touches on so many of the issues that bleed into our collective assessment of acceptable parenting: race, class, culture, age, sexual orientation. Frida worries that if Gust and Susanna raise Harriet, her daughter’s entire extended family will be white, and she’ll never again be around Chinese people. Meryl, a teenage mother and fellow resident, says she would never take her daughter to the playground because she couldn’t stand the way the other mothers looked at her.

The author underscores how mothers’ parenting is always judged more harshly than fathers’: In the women’s facility, weekly phone time with their children is withheld as punishment, while the men never lose their phone privileges.

And what of Frida’s unforgivable lapse? Chan’s readers ache along with Frida for her to be reunited with Harriet, so perhaps even the unforgivable can find some measure of mercy. We also grasp that under the white-hot glare of constant surveillance and evaluation against impossible standards, no parent could pass muster; everyone would be declared unfit.

For Frida, being a good mother means choosing to give up everything to be with her daughter. She will do this, and she already plans what she’ll tell Harriet sometime far in the future. “I am a bad mother, she’ll say. But I have learned to be good.”