A journalist follows the recycling trade around the world. 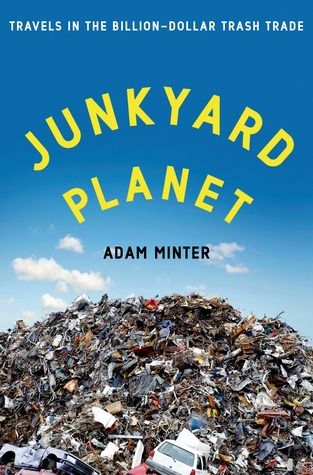 I generally evaluate books on the degree to which they are well written and whether they change my thinking. Adam Minter’s first book, Junkyard Planet, a travelogue on the global recycling and reuse trades, deserves high praise on both scores. But Minter’s success at expanding my horizons and pleasing me with his prose didn’t come hard-charging out of the gate. His narrative style emerges as a business journalist’s methodically accumulative, facts-on-the-ground type of persuasion.

Minter takes the reader on tours of various scrapyards and material processing facilities from Minneapolis, Dearborn, and Indianapolis in the Midwest to Bangalore, Guangzhou, and Wen’an in the Far East, among a dozen or so other places. One of his stops is the family owned scrapyard where he grew up working elbow to elbow with his grandmother. These vignettes and the interesting characters who populate them, though geographically and chronologically scattered, slowly and logically reveal the tidal forces of supply and demand of factory production and material consumption that splash back and forth around the world over the course of decades, though sometimes within a few weeks.

Minter’s introduction to his book alarmed me as a community sustainability advocate: “This book aims to explain why the hidden world of globalized recycling and reclamation is the most logical (and greenest) endpoint in a long chain that begins with the harvest in your home recycling bin, or down at the local junkyard.” My experience battling the improper siting and poor regulation of trash transfer stations, promoting the salvage and reuse of building materials, and arguing for a regional, as opposed to global, reorientation of economic activity led me to mentally gag on Minter’s assertion. How could poorly regulated waste processors half a world away, with workers paid in the hundreds of dollars a month and a record of nonchalance toward toxic harms, possibly be the “greenest”? However, Minter carefully builds a persuasive case for the fact that a large portion of the Asian scrap trade is more environmentally responsible and better at recognizing the value of materials than players in North America. But more than that, he lays out how the United States, as the “Saudi Arabia of scrap” and the historic home of clever improvements in scrapyard automation, has directly contributed to the whirlwind development of the Far East and indirectly inhibited some environmentally destructive and wasteful mining practices.

By the third to last chapter, when an association responsible for global scrap metals trade hosts an innocuous-sounding “special meeting” at the China World Hotel in Beijing, Minter has largely educated his readers as to what is at stake and makes them want to learn what will transpire after the global economic collapse. Minter points out that in 2008 “there were no Taiwanese scrap brokers in the lobby whispering ‘Do you want a girl?’ to any male with a white face, a delegate badge, and a shipping container of old washing machine motors to sell.” However, because Minter “visited their factories, met their children, enjoyed their alligator banquets, sang karaoke with them,” he is in a unique position to report on the personal dynamics that emerge from the vagaries of markets that adjust swiftly by increments of mere pennies per pound on the London Exchange.

As a clear-eyed journalist, he is nevertheless scathing in his reports on the physical and public health implications of certain recycling practices, especially cottage-industry-scale plastics recycling in the Hebei Province of China, which he describes in a caption to one of the book’s many instructive color photographs as “the most polluted place I have ever visited.”

Although he does not directly address the growing international “zero-waste” movement that recognizes waste is nothing more than a resource in the wrong place, Minter ultimately lays out strong arguments for the intentional design of products for reuse, the environmental appropriateness of the informality of Asian markets for recyclables, and the high potential for Asian businesses to take over a good portion of the U.S. recycling trade as “buyers” from the East begin to quietly enter a historically Western “seller’s market.” He also explains how the economics of shipping dictate why so many of America’s recyclables will end up in East Asia.

In closing his excellent book, Minter describes how, when he and his wife are living in Shanghai, they contribute their cans and plastic bottles to Wang Ayi, their housekeeper, as a twice-per-week bonus, rather than recycling at home. Out of curiosity, Minter offers an 8-pound cast iron pipe to Wang, which causes her eyes to widen because the pipe is “worth some real money.” When Minter asks to accompany her to the scrap trader downstairs and watch the transaction, she turns to Minter’s ethnically Chinese wife with a concerned look on her face and exclaims, “if scrap buyers see a foreigner, they won’t pay as much money” because they “don’t think you really know the true value.” As an international expert in scrap commodities, Minter understands well the value of cast iron pipe, but he laughs at his housekeeper’s exclamation because he also knows the subtle but powerful cultural dynamics at play in the Asian and North American marketplaces, which he joyfully shares with his readers.

Jim Schulman is currently treasurer of the Building Materials Reuse Association (BMRA) and is a registered architect in Washington, D.C. He is also the founder of Community Forklift, a 40,000-square-foot retail used-building materials store in suburban Maryland, and a founding board member of the nonprofit organization Sustainable Community Initiatives, which owns Community Forklift.

Opening Wednesday at a Theater or Drive-In Near You