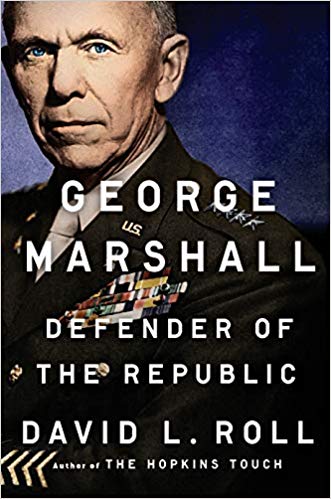 George C. Marshall was born in Uniontown, Pennsylvania, in 1880 and attended Virginia Military Institute at a time when a commission in the U.S. Army was not an automatic benefit of a VMI diploma. However, in 1901, two months before graduation and eight months short of his 21st birthday, Marshall, in the words of biographer David L. Roll in George Marshall: Defender of the Republic, “made a bold move to seize control of his future.”

Determined to secure a commission as an officer, he boarded a train for Washington, DC, carrying a letter of recommendation from VMI. After meeting with several key officials, he strolled over to the White House, where he found his way to the second floor and a face-to-face encounter with William McKinley.

The president asked Marshall what he wanted, and Marshall told him. A few days later, Marshall found himself on a select list of officer candidates approved to take the examination that would gain him his commission. He passed the test and was soon aboard a ship headed for the Philippines as an infantry officer.

Making that list and then passing the exam not only had an impact on Marshall but, more significantly, on the nation — and, by extension, the world. Beginning with his benefactor McKinley and ending with President Harry S. Truman, Marshall served under 10 presidents and had a dynamic and positive influence on the first half of the 20th century. He ended his public life in 1953 by winning the Nobel Peace Prize, the only career military officer ever to do so.

In those 50 years, from McKinley through Truman, Marshall’s accomplishments were many. He became a valued aid to General John J. Pershing during the first World War, when his influence over the positioning of troops helped lead to Armistice. On September 1, 1939, the same day Germany invaded Poland, marking the beginning of World War II, Marshall became President Franklin D. Roosevelt’s Army chief of staff.

In the months between his appointment and before the December 7, 1941, attack on Pearl Harbor, Marshall was instrumental in building a new citizen-army led by a hand-picked cohort of young officers who would win the war.

Before and during WWII, Marshall displayed a remarkable ability to gain the respect and trust of many, including, most importantly, Roosevelt. In Roll’s compelling narrative, there are many examples of this, including a moment in May 1940 at a garden party, when FDR announced a plan to cut $18 million from military expenditures.

To Marshall, the money was key to American preparedness; during the following days, he all but bullied Roosevelt into changing his mind. Marshall’s influence on Winston Churchill, who came to rely on his advice and judgment, was key to the Allied defeat of Hitler and the Nazis. Churchill later called him World War II’s “organizer of victory.”

Author Roll is neither the first nor likely the last to write a biography of soldier/statesman Marshall, but his magnificent portrait of the man comes at a time when we seem most in need of leaders with his abilities, attitudes, and selfless dedication to the nation. Roll, a Washington resident, attorney, author of The Hopkins Touch, and co-author of Louis Johnson and the Arming of America, argues that, today, as Marshall’s significance is fading from memory, “his achievements, and particularly his character must never be forgotten.”

Roll’s work — which profits from new sources, including personal letters not made public until recently — does not supersede Forrest Pogue’s monumental four-volume Marshall biography as much as it supplements it with new material and a vigorous new vision of Marshall’s character and significance. Roll’s work is a highly focused depiction of Marshall that vividly recounts moments in the man’s life and then puts those moments into historical context.

There are many such examples, but one of the most intriguing came days after Pearl Harbor, when Marshall summoned Brigadier General Dwight D. Eisenhower to Washington to be one of his war planners. Roll’s comment: “Thus began a partnership that led to the greatest victory in American history since the Revolutionary War.”

Still, Roll does not omit nor gloss over Marshall’s flaws and shortcomings, which include his failure to integrate the racially segregated U.S. Army in the days before and during WWII — a failure he shared with almost all of the men in power in Washington at the time, including the president himself.

Rather than apologize for his subject’s actions, the author rather bluntly declares that Marshall’s decision not to tackle this issue was probably based on “a blend of indifference and condescension.” He also concludes that Marshall, among others, missed signs that Pearl Harbor was about to be attacked. Balancing all factors, however, he concludes: “It has been said ‘If you want to test a man’s character, give him power.’ By quieting his shortcomings General George Marshall passed the test.”

David Roll’s fear that Marshall is becoming forgotten in today’s world is probably realistic, but his highly readable biography should go a long way to bringing the man back into the public consciousness.

Paul Dickson’s next book is The Rise of the G.I. Army, 1940-1941: The Forgotten Story of How America Forged a Powerful Army Before Pearl Harbor.

How the Hell Did This Happen?