Conquistadores: A New History of Spanish Discovery and Conquest

This detail-heavy work is impressive but short on new insights. 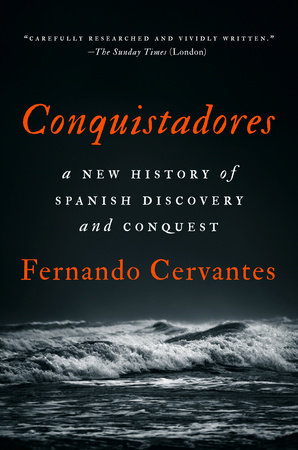 Four months after Queen Isabel and King Fernando conquered the last bastion of Nasrid (Moorish) presence in the Iberian Peninsula, a Genoese sailor rode away from their camp dismayed. He was sure he had failed, yet again, to persuade the royals to endorse his venture. But then, a palace messenger caught up with him and urged Christopher Columbus to return to the king and queen’s camp in Granada.

Isabel and Fernando were, perhaps, desperate for revenue in 1492. Their war against the Nasrid kingdom, culminating in the capture of Granada, lasted nearly a decade. And now, coffers empty, Fernando still yearned for what every medieval Christian monarch sought: a chance to go on crusade and conquer Jerusalem.

They were seduced by the Genoese sailor’s plan to find a route to gold- and spice-rich Asia through what he was convinced were antipodean islands populated by the Amazons of legend. For as many years as Isabel and Fernando had spent waging war against the Muslims, Columbus had spent them lobbying one court or another in search of royal patronage for his outsize ambitions of adventure, riches, and wonder.

In Conquistadores, historian Fernando Cervantes places the now-infamous story of Columbus’ westward journey, followed by the Spanish conquistadores who warred and plundered in his wake, firmly in the context of their times. The men who led these expeditions were products of a culture that read chivalrous novels and of the campaigns against the divided Nasrid kingdom. They were ambitious adventurers constrained by medieval society looking for, yes, wealth and glory, but also — the author claims — honor as they understood it.

Cervantes argues in his introduction that our contemporary revulsion at the atrocities committed by the conquistadors prevents us from understanding the men as products of their time and reduces “the richly complex world of the conquistadores to a sweeping caricature.” The Spaniards may not deserve the unquestioning admiration that writers even as late as Washington Irving in the 19th century lavished them with, but we should, Cervantes argues, understand their world, which saw no contradictions in governance that was both “high-minded and shamelessly lucrative.”

Thus follows a detailed account of the ambitious, venal, and clever men who crossed an ocean and dismembered not one but two great empires, while devastating countless smaller kingdoms and peoples in the process. Cervantes offers intriguing specifics about many of these conquerors. Columbus was convinced the world was smaller than the best minds of his time insisted, so he manipulated his ship’s log — understating the distance traveled — to assuage a potentially mutinous crew. Hernán Cortés’ angry brutality sometimes appalled his followers. And Francisco Pizarro conducted his plunder of Incan Cusco with meticulous organization, documenting each gold or silver item before melting it down into bullion.

The comprehensive chronicle is masterful, explaining everything from military conquests to philosophical arguments over the rights and nature of the natives found in Spain. Cervantes’ narrative suggests some fascinating conclusions, including about how the war and divisions among both the Mexica (Aztec) and Incan peoples primed them for conquest by the canny Spanish invaders.

The vast network of human sacrifice that the Mexica depended on was fed by their own conquests, making those subject kingdoms eager to ally themselves with Cortés and his supposedly liberating mission. This narrative reminds us of the agency those Indigenous peoples had and of their own role in history.

Cervantes likewise takes pains to ground his conquistadors in the European politics of the day, documenting their efforts to ingratiate themselves with the royals back home and highlighting how the Continent’s power struggles distracted and motivated Spanish kings. The scope is so broad that the book’s 357 pages of main text (plus more than a hundred additional pages of notes) seem much longer. Cervantes crams a lot of history into these pages.

It was a history that this reader found slow going at times, despite the fascinating details. After all, we know how the story is going to end. The narrative drive should, then, come from the intellectual exercise of reexamining these villains of history.

And yet, Cervantes makes little mention of his revisionist mission. There are sparingly few editorial comments amid page after page of meticulous historical detail. Details which, by the way, often confirm the conquistadors’ villainy (like Pizarro’s torture and vicious murder of a captured Incan queen, or the massacre of some 600 Indigenous children by one Peruvian conqueror). In the beginning, the author urges us to see the conquistadors as people living in a world as fallible as our own; by the end, it’s not clear why that matters.

Perhaps it’s heretical of me, particularly as someone personally vested in excavating the human from the murky past, to suggest that our caricatures might not benefit from being fleshed out. But when it’s the victors who are being rehabilitated, I think it’s a fair question. What do we stand to gain by understanding the conquistadors better?

By the book’s conclusion, Cervantes offers only an argument with 19th-century historians as his justification. Those historians needed to malign the conquest as unmitigated ignorance so as to glorify Latin America’s wars of independence and justify the creation of unitary nation states.

There, perhaps, Cervantes could have written a second, more compelling book. If Latin American nations today are founded on a mistaken rejection of the conquistadors’ world, that might suggest some interesting political conclusions. And the notion that the largely medieval system of government the conquistadors established in the Western Hemisphere still echoes in today’s Latin American politics might offer some surprising insights. But Cervantes only hints at these conclusions, so his final reassessment feels hollow.

We’re left, instead, with a detailed knowledge of the conquistadors’ brutality, genius, cupidity, and religious conviction. Perhaps grappling with those contradictions and — without the author’s guidance, unfortunately — seeing through them the refracted contradictions of our own age are all the justification such a history needs.

Carrie Callaghan is the author of the historical novels A Light of Her Own and Salt the Snow (Amberjack/CRP). She lives in Maryland with her family and three ridiculous cats.