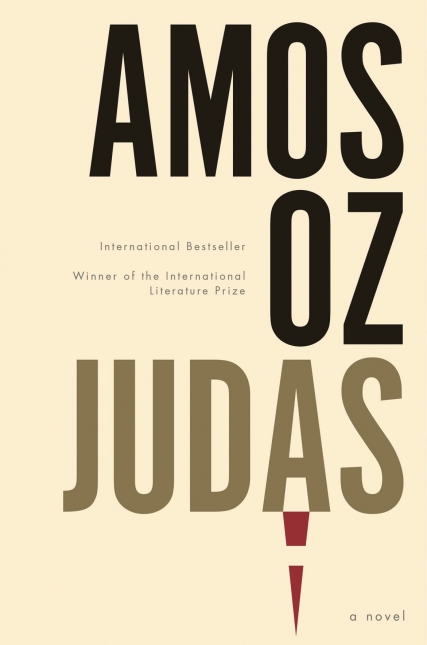 Judas, the latest novel by Amos Oz — Israel’s most famous, universally accessible author — is in part a meditation on “Jewish Views of Jesus.” This is the theme of the thesis our hero, Shmuel Ash, is working on at the University of Jerusalem in 1959. As the story opens, a love affair goes bad and his father declares bankruptcy; Shmuel finds his studies interrupted and his zest for life in shambles.

Chapters of Shmuel’s thesis-in-process creep in throughout the narrative with scholarly analysis of Jewish reactions to their own miracle-worker-turned-worst-nightmare, from Josephus through the Talmudists to sages facing the inquisitorial Christian Middle Ages.

Twenty-something Shmuel’s coming-of-age tale fleshes out the historical skeleton. One day, in the midst of the deconstruction of his life, while posting a note offering his meager worldly goods for sale at the university message board, Shmuel discovers just the misanthropic chance he’s looking for: a job as companion and caregiver to a cantankerous old man in return for an attic room and a small stipend. Thus, Shmuel spends the sodden Jerusalem winter in the solitude he seeks.

Upon his first visit to his new digs, Shmuel discovers that a room on the lower floor of the house is never opened. This, along with the sad, mysterious resident widow, Atalia, provides the only enticements to inquisitiveness for both our hero and the reader. Outside of these curiosities, Shmuel’s life appears in frequent repeats: The loops of every-night-the-same oatmeal and tea, every-morning bread and cheese perfectly capture the monotony of a life given up at such a young age.

Moviegoers may have been stirred by the recent film "A Tale of Love and Darkness," based on a previous autobiographical Oz novel of the same name that also deals with the dark side of life in the Promised Land. Happiness in the Promised Land is not always as promised; life there is not always softened by an otherworldly glow. The apologists say, “You live in the Holy Land. What could possibly be your problem?” Oz’s gift is to help us see there is no place on Earth where we might flee the slings and arrows common to humanity.

Some aspects of this latest Oz novel must be autobiographical: Shmuel’s asthma echoes that of Oz’s own son, for whom the family had to move to the drier Negev Desert. And Oz, of course, is an outspoken proponent of the two-state solution to the Palestinian-Israeli conflict, an opinion that has caused many of his compatriots to dismiss this thoughtful and masterful writer.

Some modern Israeli writers keep politics out of their writing. It’s easier that way: It helps maintain the unified Holy Land, high-moral-ground myth better. When Oz puts the dead weight of boring, everyday life against the flashes of politics — and not the politics of a faceless, dehumanized enemy — the truth stands out like lightning.

Our fictional hero Shmuel’s studies lead him to the belief that it is the traitor Judas, not Jesus, who is the pivotal character in the Christian story. Without Judas’ inspiration that Jesus could do more for himself in Jerusalem’s holy of holies and by taking a political stance, the Nazarene, it seems, would have lived out his days as a run-of-the-mill miracle worker in backwater Galilee.

This treacherous plot, of course, has repercussions for Jewish misery down through the ages as the traitor is expanded in Christian minds to include an entire race. Yet none of Shmuel’s scholarly sources even mentions this original victim of his own PR scheme.

Milan Kundera, the Czech-French writer of a stature similar to that of Oz, describes how the great struggles of modern politics focus on who will wield the airbrushes (or Photoshop keys) of the stories of our nations. Israeli history is fraught with even more controversy than the average nation, yet even more singularity of outward purpose is required of its history writers.

As such, history cannot tell us these stories: only fiction can. And not fiction that works in the flashier, more popular mode of an Exodus. In the slow plod through the soggy days of a youthful Jerusalem, the secrets of the lonely stone house on Rabbi Elbaz Lane will unravel with quiet desperation.

Judas documents the lives after brutal attacks, as well as the insidious assaults-by-neglect from compatriots. When such lives are reduced to a continuous round of oatmeal and tea, it begs the question: Which is the greater murderer of talent and energy? Nonetheless, like A Tale of Love and Darkness, this powerful work ends by pointing the individual to a life of hope, ironically away from books and academia.

Ann Chamberlin is the international bestselling author of 20 books, most of them historical novels set in the Middle East. She works part time at the University of Utah's Middle East Library where she transliterates Arabic and Hebrew. She helped excavate the biblical city of Beersheva and also has written numerous plays produced nationally and internationally. She lives in Salt Lake City.