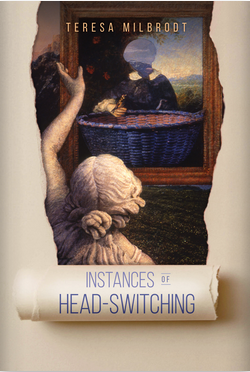 Instances of Head-Switching, a new collection of short stories by Teresa Milbrodt, is filled with diverse, disabled characters and magic as a commonplace occurrence. Milbrodt has an uncanny way of retelling myths, fables, and fairytales, reimagining Sisyphus, Athena, and Snow White. Writing mainly in first person and leaving the characters nameless is a deliberate choice, and one that allows the reader to try on any of the bodies inside these stories.

The opening tale, “The Monster’s War,” is eerily like our current pandemic. A found family of disabled friends evacuate their city as it’s overrun by monsters. When it’s safe to return to normal life, the main character goes back to her office job, but everyone is uneasy and doesn’t know whom to trust.

In Milbrodt’s version of Sisyphus’ story, Hades curses him to live out the rest of his days finding low-wage work at gas stations or supermarkets, since he was an ungrateful king in his time:

“In the evening he came home smelling like grease and cigarettes, wishing for his old routine of boulder and hill. He didn’t realize how much he’d come to relish that regularity.”

After an eternity rolling a boulder up and down a hill, Sisyphus has developed superhuman strength: “He’d spent too long rolling that damned stone up the hill…He had to pretend the world was made of glass threads.” Snow White, meanwhile, uses magical powers to transform into an old lady in “The Mirror.” She enjoys the power of being older.

Trauma, mental illness, chronic pain, and emotional distancing are prevalent themes in the book. In “The Hostage,” an undefined disease is stigmatized. “Diseased people should not have good jobs, or cars, or even be mobile. We needed to be in an area set off from the rest of society,” Milbrodt writes, highlighting how some view illness and disability.

In these stories, idioms are not just a figurative device. Milbrodt envisions a world where the main character in “Marbles” regulates their emotions by swallowing the proper combination of marbles. And in the title story, people switch out heads that come with various personalities to help them deal with different scenarios throughout the day.

Many of the stories explore blindness and losing sight. Milbrodt herself is blind, and the varied disabilities depicted offer important representation. Her characters weigh whether regaining sight — through magical means or otherwise — should be their ultimate goal, or whether accepting their bodies and pursuing increased accessibility is the right path.

In “The Dreamlords,” a blind mother finds a job as a dreamer and is paid for her reveries and nightmares. But dream work comes at a price — the tech and supplements she must use seem to be sapping her sight, making it harder to see her daughter and causing her to hallucinate about her dead husband and mother. The story is reminiscent of “Maniac,” the Netflix show in which Jonah Hill and Emma Stone participate in a pharmaceutical trial where people work out their traumas in dreams.

Instances of Head-Switching is a welcome addition to the disability/crip literature canon, but it should be noted that some stories include ableist tropes, like blindness granting one foresight (“You May Mistake This for a Love Story”) or giving up something in exchange for protection (“In the Dim Below”).

In “Body Spirits,” an arthritis witch pricks the main character with needles, and this character’s boyfriend deals with an ever-present elf who causes seizures. The boyfriend, a photographer, opts not to take his medication and instead experience the seizures that give him visions and creativity. The main character ends up hiding his medicine in jam and feeding it to him. Through this nonconsensual act, the boyfriend’s bodily autonomy is completely disregarded.

This may have been Milbrodt’s point. Often, people with disabilities and chronic illness are given medical treatment or advice that ignores their wishes, their pain, their decisions about how to manage their illness/disability, or their own experience with their body.

Despite this disturbing narrative choice, “Body Spirits” stands out. Pain and illness are often invisible but so present — just like Milbrodt’s unseen forces that follow her characters around and attack their bodies.

As someone with chronic pain, I relate to the interpretation of spirits causing bodily chaos. Needles are the arthritis witch’s way of getting the 35-year-old woman to slow down, to give her body a break.

Like Milbrodt’s character, some days, my body allows me to hike; other days, my hips freeze up or I experience back spasms. This story, as does the entire book, serves as “a reminder of how often being in a body is equal parts pleasure and negotiation.”

Marlena Chertock has two books of poetry, Crumb-sized: Poems (Unnamed Press) and On that one-way trip to Mars (Bottlecap Press). She uses her skeletal dysplasia as a bridge to scientific poetry. Marlena is a bisexual poet and serves on the planning committee for OutWrite, Washington, DC’s annual LGBTQ literary festival. Her poems and short stories have appeared in Breath & Shadow, the Deaf Poets Society, the Little Patuxent Review, Noble/Gas Quarterly, Paper Darts, Rogue Agent, Stoked Words, Wordgathering, and more. Find her at @mchertock.

The Kind Worth Killing

A camera-ready mystery made for the silver screen.