The Leavers: A Novel

In this tale of immigrants and adoptees, a mother and her son are reunited after a decade of living apart. 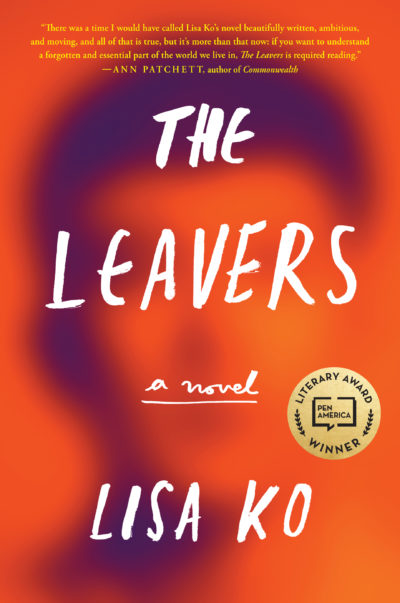 Deming Guo has a good life. Though he lives in a crowded apartment — five people crammed into a one-bedroom in the Bronx — and the adults in his life sometimes leave him home without adult supervision while working long shifts at physically taxing low-wage jobs, he is a carefree fifth-grader who has the complete love and support of his Chinese mother, Polly.

But one day, Polly does not return from work and, within a year, Deming has become Daniel Wilkerson, the adopted son of Peter and Kay, white professors at a liberal arts college in Upstate New York.

Alternating between the point of view of Peilan/Polly and Deming/Daniel, Lisa Ko’s debut novel and winner of the PEN/Bellwether Prize, The Leavers, tells the story of an undocumented immigrant and her American-born son, whose lives are upended by the vagaries of America’s cruel immigration policies.

After Polly’s disappearance, her roommates try to look after Deming, but with no money and no word from his mother, they eventually give him over to the state, which quickly finds him a “forever home.”

As one of the very few minorities in his new hometown, Daniel must deal with issues of abandonment, alienation, and subtle racism. In college, he develops a nasty online-gambling habit that causes him to flunk out of school, lose a good friend, and relinquish what little self-confidence he had. Unmoored, he moves to New York City to break into the music business, but his self-loathing keeps on getting in the way.

Meanwhile, 10 years after disappearing from Deming’s life, Polly resides in Fuzhou, China. Married to a successful businessman, she is a top executive at an English-language school, with a glamorous life of travel, sumptuous banquets, and abundant material comfort. How did she get there? What happened in the decade since Deming last saw her?

The chapters toggle back and forth between Daniel’s story and Polly’s, which is the more compelling narrative. She tells of her hardscrabble, rural childhood in a China emerging into capitalism, her impregnation by a man she does not wish to marry, her decision to flee to America, and the perils and sacrifices she must endure as an undocumented worker.

Ko poignantly captures the dual identities inherent in both the immigrant and adoptee experiences. Upon her arrival in America, Peilan becomes Polly. “So it was Polly, not Peilan, who was doing thirteen-hour shifts in a garment factory, the same work Peilan had done in China except for eight times more money, and it was Polly who paid too much rent for a sleeping bag on the floor.”

Daniel wonders where Daniel had been when he was Deming, and where Deming is now that he is Daniel, concluding, “Daniel had lay dormant in Deming until adolescence, and now Deming was a hairball tumor jammed deep in Daniel’s gut.”

Every adoptee and immigrant imagines the alternative life they could have had if they had been raised by their birth mother or been adopted into another family, or had stayed in their country of origin or immigrated to a different country. One’s fate is not preordained, but ruled by chance and circumstance, and every life story is but one incident away from an alternative narrative.

Before they are separated, Deming and Polly play a game of doppelgängers, picking out people who look just like them, “another version of us…like a best friend but better; like a brother, a cleaved self.” Daniel goes to the apartment he once lived in with his mother, hoping to catch a glimpse of Deming and Polly going about their old lives.

Ko’s prose is captivating and vivid, but the story begins to sag under the accretion of minutely observed details and overloaded plot twists, many of which seem contrived and not particularly believable. The plot feels over-workshopped, as if the author’s vision became smudged with the fingerprints of too many well-meaning readers naïve about contemporary immigration (immigrants do not get only one phone call during their entire detention, for example) and adoption (it would take a lot longer than a year for a child to be declared abandoned by his parents and then formally adopted) procedures.

The crescendo to the climax swells too loud and too long, and the story is unable to sustain the suspense. While Polly’s first-person narrative is compelling, Daniel’s story is told in the third-person and is not as vibrant or convincing, resulting in a portrait of a transracial adoptee that is disappointingly clichéd, right down to the clueless white parents who berate him for his ingratitude.

Readers, however, are rewarded with a powerful ending that avoids sappy statements about the mystical connection between mothers and children and the meaning of home. Instead, The Leavers makes it refreshingly clear that family is not a matter of biological destiny but of human connection, and home is wherever you are.