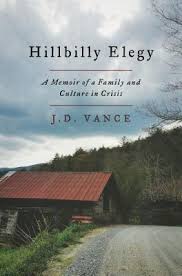 When Hillbilly Elegy was published this summer, it soared onto the bestseller lists. One reason is a sudden interest in poor working-class whites with Appalachian roots, since they are a source of Donald Trump’s popularity.

Another is that this is a memoir from someone with those roots, not a detached analysis. Vance looks at his family and birth culture with piercing honesty and a clear, vigorous style that carries the reader easily through a vivid, dysfunctional world, a world darkened by despair, but occasionally lit up by fierce love and loyalty.

Vance’s family was from rural Kentucky, but he was born in Middletown, Ohio, a Rust Belt city in decline when he was born in 1984. His grandparents had been part of the Appalachian exodus to industrial cities in the Midwest. The major employer in town was Armco Steel, which had a consistent practice of hiring members of extended families, many of them from eastern Kentucky.

In good times, that was a benefit, but it proved disastrous when Armco pulled much of its operation out. Vance describes how he saw the town go from a pleasant place where kids left their bicycles unlocked on the porch to a place where everything gets stolen and Main Street is a place you avoid after dark.

Vance isn’t the author’s birth name. He first bore the name of his biological father, who left the family when Vance was 1 year old. His mother’s third husband officially adopted young J.D., but only a few years later, that husband was gone, too, leaving J.D. to wonder what explanation he could give: “Yeah, my legal father’s last name is Hamel. You haven’t met him because I don’t see him.”

Vance adds: “Of all the things I hated about my childhood, nothing compared to the revolving door of father figures. To her credit, Mom had avoided abusive or neglectful partners, and I never felt mistreated by any of the men she brought into our home. But I hated the disruption. And I hated how these boyfriends would walk out of my life just as I’d begun to like them.”

His maternal grandparents, Mamaw and Papaw Vance, provided him with what little stability he had, helping with his schoolwork and offering a haven from his mother’s alcohol and drug abuse, but even they were prone to violent arguments and quick to reach for a gun. Still, they helped him believe that better days were ahead, and they were.

Vance’s story continues after he almost drops out of high school: He moved in with Mamaw and Papaw, graduated, joined the Marines, and went on to impressive success in college and entrance to Yale Law School, a culture so different it might be on another planet.

“I felt like my spaceship had crashed in Oz. People would say with a straight face that a surgeon mother and engineer father were middle-class. In Middletown, $160,000 is an unfathomable salary; at Yale Law School, students expect to earn that amount in the first year after law school.” He noticed that, although his classmates were diverse in some ways, “black, white, Jewish, Muslim, whatever,” they were all from intact families who never worried about money.

One of his mentors is Amy Chua, law school professor and author of The Battle Hymn of the Tiger Mother, which describes child-rearing practices light years away from those Vance experienced. Vance soon discovered that his hillbilly upbringing had left him remarkably ignorant of how to get ahead.

But he learned. He learned that you need to wear a suit to a job interview, and that “wearing a suit large enough to fit a silverback gorilla was inappropriate,” and that finance is an industry that people actually work in. His good fortune has continued, and his is now a principal in a leading Silicon Valley investment firm.

He acknowledges that he had a few important people who helped him along the way, and mourns for his peers who did not. He has some blunt words for people in his culture: “We hillbillies must wake the hell up,” urging them to take responsibility for their own lives and not blame their poverty on the Chinese or immigrants or other exterior factors. He also calls on some changes in social services to recognize the realities they’re dealing with.

What’s missing in Vance’s account of his upbringing is the vibrant traditional culture of the Appalachian Mountains. There is no mention of friends or family who make music, no tellers of stories, no memories of days at church with “dinner on the ground” that bind communities of hill people together.

People in his childhood and adolescence rarely attended church and had no interest in organized religion. Family gatherings typically degenerated into alcohol-fueled arguing. Hillbillies have left something else behind with their move to town: their heritage as the nation’s best natural soldiers.

For centuries, the young men from the mountains, who could walk for 30 miles without complaint and drop a squirrel out of a tree at 100 yards, made legendary infantrymen. When Vance tells the story of his experience at boot camp, we see an overweight town kid who had hardly ever handled a gun. It’s almost a gratuitous insult when the instructor tells him that people who come in with experience with weapons have too much to unlearn to ever be good shots.

Hillbilly Elegy is an entertaining and insightful read. The reader may not always agree with Vance’s conclusions, but his ability to show us the real people and experiences behind the sad statistics gives his book unmatched credibility and power.

Susan Storer Clark is a frequent contributor to the Washington Independent Review of Books. She is a former radio and television journalist who has completed one historical novel and is at work on a second. She and her husband, Rich, live in the Seattle area, where they have remodeled an old farmhouse.

A long overdue look at the champion of colonial farmers in Vermont and first hero of the American Revolution.