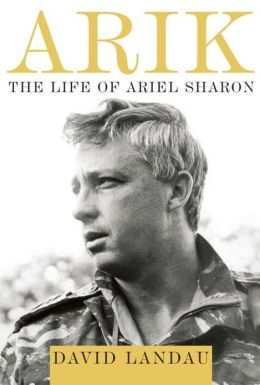 If you look up “polarizing” in the dictionary, don’t be surprised to find a picture of Ariel Sharon. Few people were neutral about the distinguished and controversial soldier-statesman who played a key role in the life of Israel from its founding in 1948 until the beginning of this century.

Supporters say that as a general, cabinet minister and prime minister, Sharon was a tireless servant of Israel who did a great deal to ensure its survival and further its interests, especially given the hostile neighborhood in which it is located. Opponents contend he was a Machiavellian figure, ruthless in his approach to politics and warfare.

Though there is some truth in both assessments, those wanting to draw their own conclusions will find a great deal to work with in David Landau’s Arik: The Life of Ariel Sharon. The book will no doubt spark considerable interest, as Sharon died on January 11 after having been in a coma for almost eight years.

Landau, a former editor of the liberal Israeli newspaper Haaretz, is not a fan of Sharon but the book is not a hatchet job. Arik is an important and extremely readable take on the subject.

The author accurately captures Sharon’s rapidly changing reputation: “When he was elected prime minister, many proud and patriotic Israelis talked seriously of leaving the country. His accession to power was the stuff of nightmares. The future seemed to hold only war and bloodshed. When he collapsed, less than five years later, we wept. Not just for him; for ourselves.’’ Landau engagingly describes that evolution and is at his best when he puts Sharon’s development in the context of world events.

Sharon grew up on a moshav — a farm cooperative — in the 1930s and 1940s. There he developed both a rugged individualism and a strong love of things military. At age 14 he joined the Haganah, the underground army of the Jewish state-in-the-making where, according to Landau, Sharon “distinguished himself in hand-to-hand combat training and fieldcraft.’‘

This further whetted his appetite for all things military and he joined the army where he would have a distinguished though controversial career. For example, during Israel’s 1956 war he was praised for being an aggressive and strategic leader. But then-Armed Forces Chief of Staff General Moshe Dayan also criticized Sharon for needlessly risking his soldiers’ lives in his quest to kill more Arab soldiers.

Despite the criticism, Sharon played key leadership roles in both the 1967 and 1973 wars, which Israel won against long odds. Thereafter he built a political career on his military successes, serving both as a member of the Knesset, Israel’s parliament, and as a member of several prime ministers’ cabinets.

As a political figure, Sharon continued the unyielding policies that characterized his military career. While defense minister in 1982, Sharon oversaw the controversial and bloody invasion of Lebanon. A government commission absolved him of direct responsibility but nonetheless recommended that he resign for failing to anticipate the invasion’s full impact. When the cabinet voted to remove him from office, he was the sole dissenter.

In perhaps his most controversial act, Sharon helped design and implement the policy of allowing settlements in disputed territories. During the Six-Day War in 1967, Sharon installed an Israeli infantry training school in a captured Jordanian army camp on the West Bank. The school later became the center of an Israeli settlement, as civilians moved to the surrounding area to support the facility’s operations and house military families. For the next 30 years, including while serving as Minister of Agriculture under Prime Minister Menachem Begin, Sharon advocated the spread of settlements into Gaza, the Golan Heights and parts of the Sinai Peninsula.

As prime minister, however, Sharon’s policy changed radically. In 2004 Sharon abruptly announced that Israel would disengage unilaterally from the 21 settlements in Gaza and four on the West Bank. Further, he promised that the country would no longer establish new settlements.

Sharon explained that withdrawing from the settlements would help the peace process and force Israeli’s enemies to make concessions. The majority of Israelis supported Sharon’s decision. Many saw in it an admission that demographic trends made an eventual peace accord with the Palestinians both inevitable and in Israel’s best interests.

But Sharon’s policy alienated many within the Likud Party, which he had helped to found decades earlier. Sharon no doubt contributed to his erstwhile supporters’ ire by pledging “not [to] let the Palestinians off the hook by letting our own extremists determine the course of our politics.” Ultimately he became so unpopular that he had to leave and form his own centrist Kadima Party.

Despite the popular perception that Sharon was motivated by altruism as well as politics, Landau contends that he dismantled the settlements mostly to improve his political standing:

“The kerfuffle over how extensive the disengagement was going to be hardly broadcast prolonged strategic thinking or steely resolve. Rather, it broadcast last-minute scrambling to achieve maximum popular and political gains from a long-contemplated but suddenly urgent change of policy,’’ he writes.

Landau interviewed seemingly everyone involved in recent Israeli politics and did extensive historical research as well. The result is a valuable, though at times verbose, book. Landau’s prose is solid, but lacks the literary flair of biographers such as Ron Chernow, David McCullough and Edmund Morris. Fortunately, he doesn’t bog down the narrative with an excess of minutiae.

Sharon’s radical change from virulent hawk to moderate peace seeker is one of the more interesting political changes in recent times. Landau skillfully and engagingly chronicles the how and why of that change and other fascinating details of a life well lived.

Claude R. Marx is an award-winning journalist who is writing a biography of William Howard Taft.

Drawing on his wide-ranging travels, the poet/author considers the transfer of feelings among cultures.