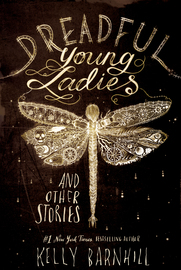 A woman sharing her life with a Sasquatch. A man sheltering an almost-invisible daughter. Twins who turn into insects. Ladies who create miracles. Love letters from the dead.

Whimsical elements populate the stories of Kelly Barnhill's new collection, Dreadful Young Ladies, but they don’t dominate them. Instead, what emanates from these stories is the emotional core of the characters and the mood of the tales.

This is not surprising for any readers who soaked up Barnhill's Newberry Award-winning middle-grade novel, The Girl Who Drank the Moon. As her books for children do, Dreadful Young Ladies — which is most definitely for an adult audience — explores the many facets and dimensions of magic.

Yet Barnhill never lets her fantastical plots and worlds overtake what are, at their heart, stories about the barriers that love can overcome. And love can overcome a lot here — evil, power-hungry leaders, fear — even death itself. In fact, the tender, intimate, confident, witty, and crafty "dreadful" women we encounter are often so full of love for everything that they nearly pop (and some actually do).

They’re dreadful only in the eyes of those who seek to destroy them: mostly older, powerful men who’ve lost touch with reality and humanity. (Sound familiar?)

In one of the stories, the Governor, enraged by a fertile, magical woman's effect on his land, becomes "sick with rage and frustration. His hair thinned and grew gray and yellow by degrees. His flesh sagged about the neck and jowls, while swelling at the middle. As he recited his dictation, he moved about the room like a dying tiger in a very small cage" and later throws a door open "with such force that he cracked one down the middle."

As I was reading this, all I kept thinking was how much this book could be a rallying call for these political times. The characters here could be the face of the #resist movement. If they were living in our world, they’d probably be knitting pink pussy hats and crafting elaborate, stern-but-kind protest signs. They’d be running for office and making small changes under the noses of those they disagreed with, stirring up hell with a quiet purpose, getting ready to take over the world.

But don’t misunderstand: The stories here are not political. In fact, they have a sense of timelessness that makes them instant classics; they evoke the best fairytales. I could see them cozying up alongside the likes of Grimm, Andersen, Rowling — the classic-but-chilling stories that capture truths about what it means to be human.

The shining star in the collection is the novella The Unlicensed Magician, a story about a magical young girl who's been hidden from the power-hungry Minister, who confiscates all the magic babies born after the arrival of a comet every quarter-century. He drains them of their power and uses it for himself, casting terror over the citizens of his land.

The girl, Sparrow, who's eluded the Minister's clutches thanks to some loyal and lovable comrades, gains in her power and hatches a plan — not to destroy the Minister, as one would expect, but to save him:

The narration in this story — and many others — is so delightfully confident and lyrical that you are not only willing to go along for the ride, but you're begging for it to last longer.

It might be odd to say that stories about witches and magicians and women who marry Sasquatches can seem repetitive, but because very similar ideas swirl among these tales, they can at times feel like variations on a theme.

Even the structure of some of them — numbered short sections with titles — gets repetitive. I would’ve liked to have seen a few stories that break from that convention and move away from the spell of the mystical. But that is a minor criticism for what is, overall, a confident and original collection.

If there is a resurgence of magical realism and dark fairytales in modern short fiction, then Barnhill fits right in. Her writing stands alongside some of the best I've read lately — the magic, altered reality, and reclaimed histories of the likes of Kelly Link, Carmen Maria Machado, and A.A. Balaskovits. Like these writers, Barnhill enjoys taking reality and twisting it like taffy. The result is a dark but sweet delight that will linger long after you've digested it.

Tara Laskowski is the author of Bystanders and Modern Manners for Your Inner Demons.