A trio of novels takes us into the abyss. 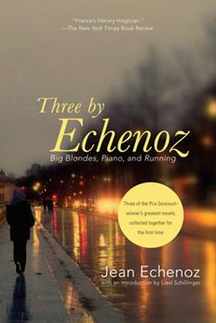 If you know anything about Postmodernism, you can appreciate the difficulty before me: review not just one novel, but three from France’s postmodern, “literary magician,” Jean Echenoz. My idea for the review was as follows: (re)stage a protest against Truth and Power using discourse from his books; remove a series of masks from my face before disappearing into a puff of smoke; and then wake from a dream only to realize “I” am someone else altogether, and this so-called “I” might not even be real.

Instead, I offer this: in a world that has gone beyond the modern project of grand, overarching meaning, how should we organize our lives? Does anyone really change? What is the role of fear? How do we overcome barriers put in place by other people? How do we overcome barriers put in place by ourselves? In Big Blondes, Piano, and Running (put together for the first time and entitled Three), Echenoz, like any great teacher, helps us articulate these questions, but never tells us the answers. He sends his characters deep into the abyss on our behalf, and has them report back on what they see.

In the novel Big Blondes, ex-pop star Gloire Stella has gone into hiding. Isolated, except for a tiny semi-imaginary homunculus named Béliard (who appears on her shoulder like an angel and a devil), she harbors tremendous fear and sooths herself by pushing men off cliffs and bridges into what she calls “the void.” Paul Salvador is making a documentary film about famous blondes, and employs a team of ineffectual detectives to track Gloire down.

If the void is explicit in Big Blondes, it’s literal in the second novel, Piano. Max Delmarc is a brilliant pianist who suffers from stage fright. After a violent death, he goes on to the afterlife — a misty and inferior pastiche of his former experience. Max isn’t allowed to associate with friends and family, and he undergoes plastic surgery and a name change. The good news: escape from his anxiety. The bad news: He has to work as a bartender and is prohibited from ever playing the piano again.

In the third novel, Running, the void appears yet again. This time in figurative form, as the Soviet regime. A departure from the first two novels, Running is a fictional biography of real-life Czech Olympian, Emil Zátopek. Part Don Quixote, part Ubermensch, Zátopek’s unlikely rise as a world class runner under the difficulties of communism is retold and examined.

Whereas readers would be unlikely to indulge a lesser-known writer in random shifts of perspective, Echenoz employs them throughout as a sleight of hand to remind his spectators: the world doesn’t make sense. There is nothing inevitable about Emil Zátopek’s rise as a world-class runner. He is unathletic; his arms flail relentlessly; he screams and grimaces all the way to the finish line. “It’s unnatural,” thinks one of Emil’s competitors. “This guy does everything you’re not supposed to do and he’s winning.”

Dead piano player Max, (in the second novel) knows even less in the afterlife than he did in life, collapsing popular hope for the expansive, all-knowing spiritual condition of death. Paul Salvador (Gloire’s foil from Big Blondes), has a philosophical breakthrough in his life-long study of light hair: “tall blondes welcome the sun, absorb it, assimilate it, then wear it.” And, the apogee: “The sun, concludes Salvador, is itself one big blonde.” Gloire, who is herself a “big blonde,” flees France for Australia. She abhors the sun and hides from it, just as she hides from Salvador’s detectives. “Goddam sun,” says the homunculus, on her behalf. In other words, there can be no relief from the cosmic joke.

All is not grim. There is a theme throughout, if not quite the immutability of the human spirit, then at least some will to resist limitations. In the most uplifting scene of the entire collection, Emil, who has been relegated to collect garbage for speaking against the regime lives to run again, defiantly, behind the garbage truck to great applause from his community. After facing her fears, Gloire finally meets a man she doesn’t want to kill. In Piano, Max, reborn in death as Paul Salvador (no relation to the Paul Salvador from Big Blondes), commits his first, and only act of courage by violating the terms of his purgatory.

Students of philosophy will love these books for their deployment of theory. Time and space are compressed in true Postmodern fashion, just as realities are questioned and changeable. Themes of great import are playfully inverted and absurdity is used to its fullest. The dark, ironic humor levitates above the more tragic elements, putting Echenoz in a class with humoristic greats like Margaret Atwood, Mordecai Richler, and Lorrie Moore, only without the red, beating heart (I really can’t emphasize enough how funny these books are). Stylistically, Echenoz isn’t far from Albert Camus and Milan Kundera, both of whom prioritize ideas and philosophical action over character development and gut grabbing emotion.

Even as the Three books had me contemplating my existence and laughing out loud, I was missing the poetic quality I’ve come to expect from literary works. I found myself wanting to skip ahead (I would have, were it not for this review) due to copious details which didn’t serve tone or characterization. While it’s possible that I, a North American, suffer from the trickle down of Iowa Writer’s Workshop Rules, or what writers sometimes like to call the neat-and-tidy “New Yorker Story,” there seemed to be a flabbiness in the writing that robbed these books of tonal resonance.

Try as I might, I did not come across one single emotion, an unfortunate trend which seems to be raging through much (non-English speaking) literature in Europe. I wanted to sense the complexity of richly felt inner worlds. Instead, I was trying to keep track of characters (especially in the first book) that seemed flatly interchangeable.

Lack of pathos aside, I would recommend the work of Echenoz to the more intellectually adventurous readers among us. Particularly Piano, which stood out as a brave and fascinating exercise of (im)mortal expectation turned on its head.

Dorothy Reno is a DC-based writer who’s been published by Red Tuque Books and is working on a collection of stories called “The One that Got Away.” She hopes to have her collection published sometime before or after she dies.

One Station Away: A Novel