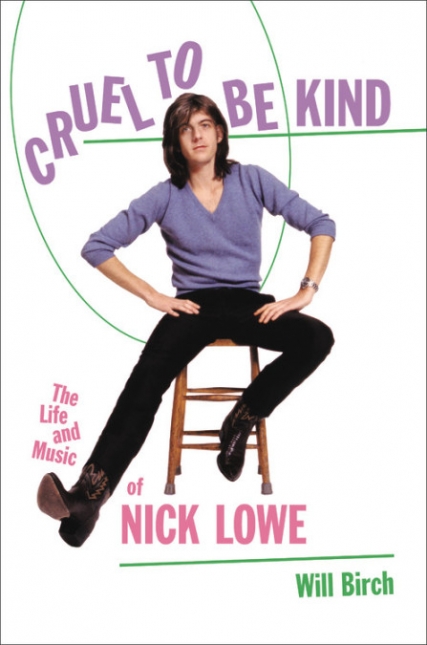 Historians and think tanks can gather for days on end to debate meaty stuff like what caused the fall of the Roman Empire or the onset of the Great Depression. I’d like to add another item to their next agenda: Why isn’t songwriter, musician, and producer Nick Lowe a big star?

Flip through the pages of a dictionary for the definition of “beloved cult figure,” and you might find a picture of Lowe staring back at you with his casual mix of charm and ironic disdain framed always by a fine rock ’n’ roll coiffure.

Lowe’s written a few pop standards, including “Cruel to Be Kind”; “I Knew the Bride (When She Used to Rock and Roll)”; and “What’s So Funny ‘Bout Peace, Love and Understanding?”; produced some well-known acts, including the Pretenders and Elvis Costello; and even married Johnny Cash’s stepdaughter Carlene Carter, but he’s never quite broken through to mainstream popularity.

Will Birch’s excellent and loving Cruel to Be Kind may not do much to convert the great unwashed, however, though I doubt he (or his subject) will care. As the book makes clear, Lowe has a very conflicted attitude toward fame. “He would sure like to sell more records but only up to a point, and not if it means prostituting himself on chat shows and social media,” author and longtime friend Birch writes.

“Is [Lowe] the secret his fans would rather not share?”

Lowe agreed to interviews for the book, and Birch is a clear admirer and pal, but it’s not a 100-percent authorized biography. Birch doesn’t dig too deeply into Lowe’s relative shortcomings as a human, preferring to focus on his talent and impact on pop music since the 1970s. It’s a breezy narrative with enough new detail to satisfy even the biggest Lowe fan.

One slightly chilling example, especially for those of us who interview celebrities on the telephone: In the mid-80s, Lowe’s then touring manager, Brendan Walsh, recalls “acting” as Lowe on interviews with radio stations conducted too early in the morning for the star himself to pick up the receiver.

Rock is getting on in years, and so are many of its original practitioners. As a genre, it’s always had a love/hate relationship with youth. A 21-year-old Roger Daltrey sang, “I hope I die before I get old,” lyrics written by a 20-year-old Pete Townsend. Today, well into their 70s, it took a Daltrey health scare earlier this year to (temporarily?) knock the Who off the touring circuit.

Whether by design or by simply being himself, Lowe has shown one way to age gracefully as a rocker. He doesn’t dye his hair, and his records over the last few decades have demonstrated greater maturity as a songwriter and performer. He’s remained a critic’s darling, can regularly sell out smaller venues (at least in the U.S.), and makes a peach of a guest on NPR.

“There’s something about wearing the clothes that suit you at the age you are,” Costello says in the book. “Who would you rather be — Steven Tyler or Nick Lowe? Steven’s a good character, but isn’t that an awful lot of work before you go out in the morning?”

With Cruel to Be Kind, Will Birch has given us a book worthy of its engaging, interesting, disarmingly intelligent, and charming subject. God save Nick Lowe.

Michael Causey is the host of the radio program Get Up! every Monday morning on WOWD 94.3 FM Takomaradio.org. Pressed for his favorite Lowe song, he might go snob and pick the lesser-known “Crying in My Sleep” rather than something more obvious (and equally great) like “Cruel to Be Kind.”

Hope you die before you get old? Click here to support the nonprofit Independent!