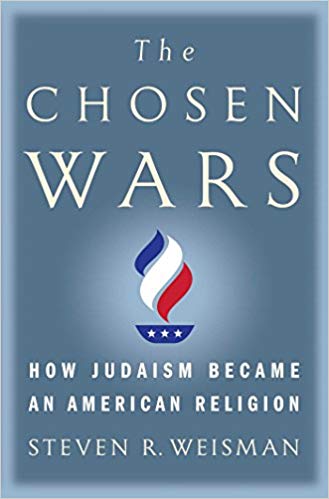 There’s the story of the rabbi who went to a Jewish community center mixer to welcome newcomers. When someone asked him what kind of rabbi he was, he answered: “Jewish. I’m a Jewish rabbi.”

Was he making a joke? Didn’t he know that the questioner wanted to know if he was Orthodox, Conservative, Reform, Reconstructionist, Hasidic, or some other variation of the religious spectrum? Of course, he knew. It was a serious answer, but with a bit of a wink.

The story that Steven R. Weisman tells in The Chosen Wars is, among other things, the story of the search for a unified Judaism responsive to time and place and seeking to be confident about a Jewish future. It’s the story of growing opportunities for Jews to enter cultural mainstreams and the costs and consequences of admission. It is a story told with power and precision.

After sketching the earliest arrivals of Jews in New Amsterdam (1654) and examining Jewish life in the Colonial period, Weisman explores the peaks and valleys of migration — most often peaks — that occurred in the 18th and 19th centuries. He details the early prominence of Charleston, South Carolina, as a place where immigrant Jews could build a vibrant community.

He examines the interplay between becoming an American with almost unimaginable rights and holding on to the traditional responsibilities of Jewish life as it had existed in past centuries. Along the way, Weisman explores the vying strands of Ashkenazi and Sephardic Jewish culture.

Part of the process of fitting in had to do with imitating what Americans expected in houses of worship. To that end, many synagogues echoed the grandeur of churches, particularly Presbyterian churches.

But how did Jews make the transition from various corners of Europe, where they were so often victims of persecution, to an unaccustomed security and even prominence in the land of the free? Weisman presents the saga in its many parts, drawing on a series of fascinating characters and stressful crises.

How did the Civil War affect Jewish communities and individual Jewish lives? Weisman reveals the answers. How did the huge influx of Jews in the later 19th century impinge upon Jews already here for generations? Readers will find out.

Weisman also presents the key issues of the Jewish Enlightenment in Europe (the search for rational religion) and its parallels in the United States. He shows readers how the major players, spiritual leaders, and lay leaders of congregations fought over the ingredients for a single brand of Judaism: Jewish Judaism or American Judaism. He takes us through the many conferences where attempts were made, mostly with good intentions, to bargain and to vote up or down which pieces of Jewish baggage to unload.

Biblical Hebrew? Longing for the restoration of the Temple? The Messiah? The dietary laws (was the Trefa Banquet a horrible mistake or misunderstanding — or was it a purposeful, insulting act of rebellion?). Observance of the Sabbath? Literal understandings of Old Testament fables? The stigma of being a “chosen” people? And what about the circumscribed traditional roles of Jewish women? Shouldn’t they be equals in all respects?

Deal-makers came and went. Congregations merged and separated. From it all, something emerged that can be called American Judaism.

It was shaped by people like Rabbi Isaac Wise, Isaac Leeser, Felix Adler, David Einhorn, and scores of others. They fought over almost everything, including which prayers to be extracted from the new Judaism’s prayer books and whether or not to continue the traditions of wearing head coverings and prayer shawls. They edited and published rival Jewish newspapers to promulgate their positions. They took turns praising and demonizing one another. In most cases, these were giant personalities; in many cases, they had giant egos.

Weisman writes in a straightforward, accessible style. His decisions about the major and minor divisions of his enormous body of material are effective. It is likely that readers will find themselves judging him to be consistently fair-minded.

The Chosen Wars is no doubt the most significant contribution to writings about the Jewish experience in the United States since Jonathan D. Sarna’s American Judaism: A History (2004). It makes the issues come to life, especially the primary one: In what ways can a people who strive to be part of wider society reconcile the historical reality — born of both choice and coercion — of being apart from it?

Sweet in Tooth and Claw: Stories of Generosity and Cooperation in the Natural World

How species benefit by working together.