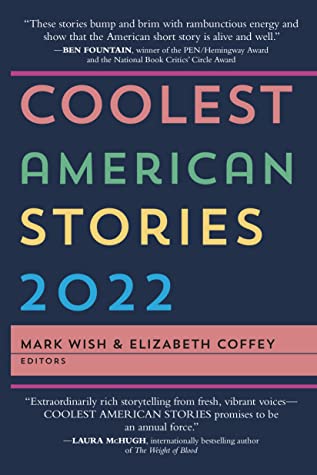 Cool is an aesthetic that’s hard to define, but you know it when you see it: James Dean, Amelia Earhart, black motorcycle jackets, surfing big waves, Stratocaster guitars, “Pulp Fiction,” and present-day Keanu Reeves. These examples share a certain quality: indifference to social norms and a willingness to face down danger.

But as we’ve moved into this divisive, constantly-on-the-edge, ohmygod are we all going to die? era, “cool” — as personified by Reeves — means something else: radical humanity. So, before I even cracked the cover of Coolest American Stories 2022, I wondered which version of cool I was going to get.

The answer is all of them. The 13 stories in this anthology edited by Mark Wish and Elizabeth Coffey are brimming with characters who don’t quite fit into their own social milieu, leaving you to more or less root for them.

In Lee Martin’s “Happy Birthday Honey Vanlandingham,” the socially awkward Shuman bumbles though his attempts to seek acceptance in his neighborhood’s “Patio Club” after his wife leaves him. He has depended on his spouse to tell him what to do and to right his wrongs for so long that even a task as simple as buying a birthday present for a mere acquaintance spirals into a thorny scandal. But Shuman isn’t trying to gain access to the Patio Club because he wants status; he just wants to be a part of something human.

Humanity is the driving force behind many of these stories, whether it’s the teenager in Frances Park’s “The Summer My Sister Was Cleopatra Moon” worshipping an older sibling who’s created an identity to escape who she really is and where she comes from, or the concerned narrator carefully monitoring his psychologically injured younger brother in the tender “All of This Is Water” by David Ebenbach.

In Megan Ritchie’s “Good Actors,” a man is deeply unsettled by the actions his girlfriend is willing to undertake for a role in a TV show. But the real problem isn’t what she will do or who she will be; it’s that he has not faced who he really is — the one who has been acting all along.

Some of the characters who populate this collection can only save themselves by sacrificing others, as in Barbara DeMarco-Barrett’s noir “Blue Martini,” where a woman tries to escape her abusive meth-head boyfriend. The sensory details of Palm Springs and the surrounding desert are painted so precisely that you can feel your skin crackle with dryness.

In Lori D. Johnson’s “Shepherd’s Hell,” we walk in the shoes of a man bone-tired from trying to save his mother, sister, and brother from their destructive choices. The delightful “Pantera Rex” by S.A. Cosby is the most “Pulp Fiction”-esque of these tales, placing Black mobsters in the American South and sprinkling everything with both modern and Southern Gothic humor.

One of the stories that radiates humanity is “The Tallest Mountain in the World” by Michael Hopkins. In it, a teen girl anticipates a piece of herself being carved away and formulates a seemingly bizarre plan for how she might save it; how she might save herself. A therapist suggests, “You could be…over-functioning, a lot of activity with no meaningful connections. A behavior not uncommon when filling a void.”

This theme runs throughout the anthology: How do we react in the face of a void in our lives, in our hearts? In Susan Tacent’s outstanding “Habitat,” the narrator fills her void with gardening. The dirt, the earth, what comes from it, all seem like a nurturing endeavor that should ground her. But when a gardening tool pierces the flimsy barrier she’s erected between herself and the real world, we see that tending to her flowers might be the very thing that’s kept her from tending to her family. As she negotiates her injury, the narrator is surprised by the content that rushes to fill her void and what it reveals about her priorities.

Almost all the pieces in Coolest American Stories occur in contemporary, realistic settings. The exception is “The Fifth of July” by Mary Taugher, set in the near future of 2033. It speculates with alarming accuracy about what our country could devolve into with the proliferation of gun violence, the withering effects of climate change, and an anxiety-riddled protagonist who cannot internalize all this as “normal.”

So, what makes these stories inherently “cool”? In his introduction, co-editor Wish defines cool stories as interesting ones, and interesting ones as those with plot, tension, suspense, and controversy. The tales in Coolest American Stories are surely plot-driven, and yet the characters are what lingered with me the most — not just who they are, but who they want to be and will be. And that’s pretty darn cool: hanging out with folks doing interesting things and wanting to stay with them for days afterward.

Liz Prato’s newest book, Kids in America: A Gen X Reckoning, is forthcoming from SFWP in June. She is also the author of Volcanoes, Palm Trees, and Privilege: Essays on Hawai’i, a 2019 New York Times Top Summer Read and a finalist for the Oregon Book Award, and Baby’s on Fire: Stories. Her work was named a Notable selection in Best American Essays 2018 and Best American Sports Writing 2018 and has appeared in numerous publications. She is editor-at-large for Forest Avenue Press and an eternal seeker of aloha.