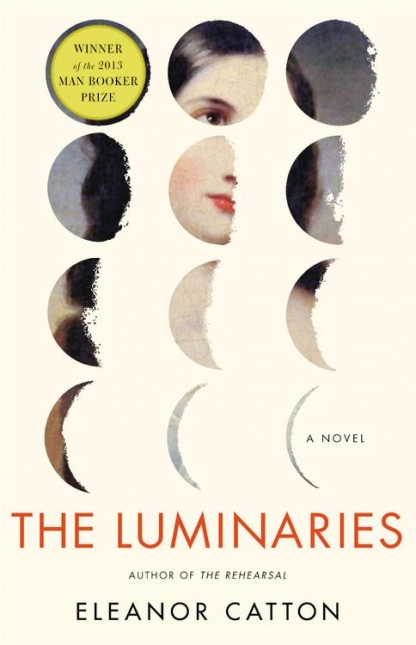 Upon opening Eleanor Catton’s The Luminaries — the winner of this year’s Man Booker Prize — the reader confronts three perplexing items: a “Note to The Reader” concerning an obscure point about the procession of the Vernal Equinox; a Character Chart, which organizes the vast array of characters into a disconcerting zodiacal scheme; and, at the opening of the first chapter, a cryptic hand-drawn astrological chart labeled “A Sphere Within A Sphere.”

Well, never mind all that for now: turn the page, and the real story begins.

The year: 1866. The place: Hokitika, a gold-rush frontier town at the bottom of the world, on the western coast of New Zealand’s South Island. It is … well, actually, it is a dark and stormy night. A fortune-seeking young Scotsman, Walter Moody, climbs ashore after wetly extracting himself from a traumatic voyage aboard The Godspeed, and checks himself into the first hotel he happens upon. Still reeling from a disturbing, uncanny event he witnessed during his voyage, Moody makes his way to the parlor for a restorative brandy. But here, he stumbles into a mysterious gathering: “The twelve men congregated in the smoking room of the Crown Hotel gave the impression of a party accidentally met. From the variety of their comportment and dress — frock coats, tailcoats, Norfolk jackets with buttons of horn, yellow moleskin, cambric, and twill — they might have been twelve strangers on a railway car, each bound for a separate quarter of a city. …”

Each of these 12 men — who number among their company a pharmacist, a Jewish newspaperman, a “whoremonger,” an Irish prison chaplain, two Chinese laborers and a tattooed Maori — has a story to tell. Each story will recast the earlier narratives to reveal new elements in turn, gradually building into a monstrous juggernaut of a plot that begins with the death of an obscure hermit, the suicide attempt of a local prostitute and the mysterious disappearance of the wealthiest man in town, and eventually incorporates stolen gold, secret identities, blackmail, long-lost brothers, a vanishing bullet, an opium den, a seance, and a con scheme so elaborate that readers will find themselves flipping frantically back through the pages to sift through the details missed the first time.

All of this sounds like a great deal of fun — and for the most part it is, although at a door-stopping 848 pages, it’s the kind of fun that requires a certain level of commitment. The New Zealand frontier setting is refreshingly novel and well realized, and the tale is told in 19th-century prose that manages to evoke a Victorian atmosphere without becoming overly clotted with archaisms. Although in interviews Catton has name-checked Dostoyevsky and Melville, we are far more in the territory of Arthur Conan Doyle’s Sherlock Holmes stories, where the unraveling of mysterious events leads to rollicking adventures.

But there’s an outer sphere to this inner sphere. With the assistance of some stargazing software, and a great deal of ingenuity, Catton has mapped her novel onto an unusually intricate framework. Those weird astrological notes turn out to have a great deal of significance in the construction of The Luminaries, and indeed have probably drawn the most critical attention.

Each of the 12 “stellar” characters Moody encounters is associated with an astrological house, with characteristics based on that sign (for example, Sook Youngsheng, a purveyor of opium, is represented as Aquarius). The eight remaining characters (that’s right, this is a cast of 20) are categorized as “planetary,” and thus wander in and out of the “houses” of the first 12. Moody, for example, is associated with Mercury (representing reason and communication); Anna Wetherall, the prostitute, with the changeable moon; Crosbie Wells, the dead hermit, with “Terra Firma” — the Fixed Earth. Plot events and character encounters reflect this scheme, with an astrological chart appearing before each of the 12 sections comprising the book.

To all of this, Catton adds yet another structural layer: each section is half the length of the preceding section — a scheme representing the waning of the moon (much as suggested by the cover illustration). Thus, Part XII barely fills a page, while Part I weighs in at a whopping 360 pages — roughly half the book.

Catton devotes that enormous first section to the aggregate narrative told to Moody in the parlor: 12 intertwined stories told from the point of view of 12 characters, each with their own backgrounds and motivations. The Victorian setup allows Catton to make much use of her omniscient narrator to pack in large chunks of character exposition with relative economy: “Balfour was indeed a man of humble standing. … His father had worked in a saddlery in Kent, and he might have taken up that mantle, if a fire had not claimed both father and stable in his eleventh year — but he was a restless boy, with frayed cuffs and an impatience that belied the dreamy, half-focused expression he habitually wore, and the dogged work would not have suited him. …”

Catton’s tendency to dump out the contents of entire personalities in this manner may be a necessary evil with so many backstories to set up, but it can certainly get tedious after the sixth or seventh iteration. Nonetheless, the patient reader will plow through, driven by the desire to fill in the missing details of the collective narrative — which, in fact, turns out to be a kind of elaborate prologue to the second half of the book. The effect here is something like watching an ingenious tinker laboriously wind the springs of a vast clockwork diorama before flipping the switch: a busy whirr of subsequent plot twists and revelations will spring into action the moment those 12 men abandon the parlor and go their separate ways. Towards the end of the book, after the plot seems to have run its course, Catton will reverse the trick, turning back the astrological procession to the year before Moody’s arrival. Hidden fragments of the past rise into view, shedding new light on the events we’ve already seen played out.

All of this is indisputably impressive — a feat not unlike composing a love sonnet based on the Periodic Table that can be read both forwards and backwards. It seems probable that the conceptual framework of The Luminaries will hold a great deal of interest for certain types of puzzle-oriented readers, who will enjoy figuring out exactly how deeply the astrological symbolism is embedded into the story. I wouldn’t be surprised to see the emergence of entire online communities — like those that sprang up around the show “LOST” — devoted to this aspect of The Luminaries, arguing over astrological charts and discovering hidden “Easter Eggs” buried in the book.

Unfortunately, I will not be counted among them. I just don’t find that the — admittedly fascinating — astrological scheme enhances the actual story in any meaningful way and, in fact, may actually deform it. Why should we care about astrology? Within the inner sphere of the story, astrology per se figures in the plot only briefly, and not particularly significantly; nor does it serve as a thematic metaphor, e.g., along the lines of fate is inescapable vs. we create our own destinies. In realizing that the characters were largely determined by their zodiacal associations, I found myself teetering between the contradictory feelings of “this is really cool!” and “so what?“And once I noticed that those long character expositions bore a suspicious resemblance to the over-generalized “personality type” descriptions you encounter in supermarket astrology booklets, I began to feel annoyed that Catton had taken her template so literally.

Catton’s strict fidelity to the 12-houses-of-the-Zodiac scheme bloats the thrifty economy of good storytelling. She elevates the importance of several characters who should have been relegated to walk-on status, and fails to invest the key players with the complexity they deserve. The moral themes of the book suffer as a result. Although Cowell Devlin, the chaplain, observes that it is “extraordinarily difficult to understand a situation from another person’s point of view,” the knowledge we gain from walking in all those shoes rarely extends beyond the superficial requirements of plot. New pieces of the story emerge, for sure, but despite all those lengthy expository passages, Catton offers us little insight into her characters’ underlying humanity: the whore with a heart of gold is revealed to have a heart of gold; the deceitful villains are revealed to be deceitful and villainous.

Don’t get me wrong — The Luminaries is a captivating page-turner of a book (although it probably would have been more so at half the length) and it’s difficult not to admire a narrative dexterity that can coherently weave together so many separate storylines. Catton is clearly a gifted storyteller with a strong interest in experimental narrative structures. I will undoubtedly pick up her next book. But I still can’t help wishing that she had invested less energy into the clockwork mechanics of the book, and more into its soul.

Tyler C. Gore, a native New Yorker, lives in Brooklyn and has taught at Brooklyn College, Hunter College and for Gotham Writers Workshop. His fiction, reviews and essays have appeared in many journals, and he has been listed several times as a Notable Essayist by The Best American Essays annual anthology. He is the recipient of a Fulbright Scholarship for Creative Writing. He currently serves as editor and Art Director of Literal Latte, an online literary journal based in New York.