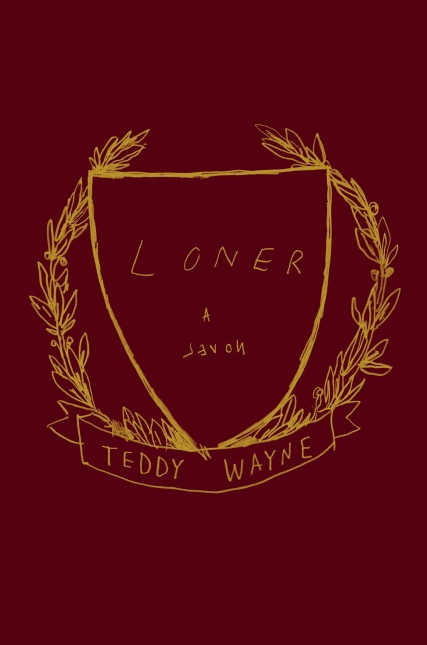 In Teddy Wayne’s new novel, Loner, David Federman arrives at Harvard during an era of intersectionality awareness, when sexism, racism, homophobia, and more are never far from the minds of the student body.

A social misfit with no real friends in high school, David clings to the praise in a teacher’s letter of recommendation: “one of the most gifted students I have encountered…It would be wonderful if David shared his observations more in class with his peers, who would surely benefit.”

David has taken her words as gospel and frequently visualizes various endings to his underdog story in which he will be famous, lauded, and, most of all, envied.

But as confident as David is that he will be able to reach a “higher social stratum,” his first attempt to strike up a conversation with two jocks ends disastrously when he announces that their names backward are Ekaj and Lihp. After a pause, one of the jocks mutters, “Guess we’re really at Harvard.”

The reader begins to sense that David is not as self-aware as he believes. He constantly studies and sizes up the people around him, but his efforts to manipulate them for his benefit fall short as he misjudges both them and himself.

This disconnect becomes more severe when he sets his sights on a beautiful, moneyed Manhattanite in his dorm named Veronica. In his narration, David addresses her as “you,” establishing his laser-like focus on the object of his obsession before the end of the first chapter.

“How differently our lives would have unraveled over these years if the computer program generating the room assignments had started up a millisecond later, spat out another random number, and the two of us had never had a chance to meet,” he wonders ominously.

He realizes Veronica is, for now, out of his league, but decides to throw himself into her path by asking out her more socially awkward roommate, Sara, who is flattered by his attentions. Then he memorizes Veronica’s schedule and works to set up accidental meetings, sure that she will see his brilliance and choose him over his competitors.

As the story continues, most of David’s transgressions occur in a grey area between clearly right and clearly wrong. The reader knows his intent is to manipulate and take advantage, but he resolutely holds on to his plausible deniability.

His thin excuses for showing up in the same place as Veronica are not as convincing as he believes but, like so much harassment, it is just subtle enough that it’s hard to pin down, hard to push back against. Veronica is portrayed as being a master of manipulation herself, but even she is unable to fully shake him when she tires of his presence; her maneuvers against him become more like shadowboxing as he closes in.

This grey area is what so many college activists have, often unsuccessfully, tried to map out and regulate. They know that what has historically been dismissed as “just joking around” or “just giving someone a compliment” can mask discrimination or aggression — the defenders of the status quo purposefully making a space “unsafe” for minorities and women without having to come out and say, “You’re not wanted here.”

The spotlight on microaggressions might seem petty, but college protesters want to show how easily a point on one end of a spectrum can slide toward the other. A campus that laughs at students dressed up like Native Americans might also laugh at real ones. A man who won’t take “no” for an answer from a woman about something small might not take “no” for an answer about something big.

David pushes right past the less-defined boundaries and seems to be on an unavoidable collision course with bigger ones. His sense of entitlement does not so much cloud his judgment as fuel it; he considers his victory a foregone conclusion, so no risk is too great.

Some details about the novel’s characters are unrealistic — like the idea that someone like Veronica would be well-versed in feminist theory — or underdeveloped — like David’s preoccupation with visualizing words backward (strangely, despite his college-application essay on “ontological arbitrariness,” David allegedly does not know who Jacques Derrida is). But Wayne successfully keeps the reader focused on David and his goal, even as his methods become more and more disturbing.

The class David enrolls in for the express purpose of stalking his prey is called “From Ahab to Prufrock: Tragically Flawed Hero(in)es in American Literature, 1850-1929.” Wayne sprinkles a few references to the T.S. Eliot poem throughout the novel, such as when David decides, “No more measuring out my life in coffee spoons.”

While both David and Prufrock are obsessed with women and what women think of them, in the end, David does not really care if a woman responds to him. “That is not it at all, that is not what I meant, at all.” Prufrock says he does not think the mermaids “will sing to me.” David never doubts it.