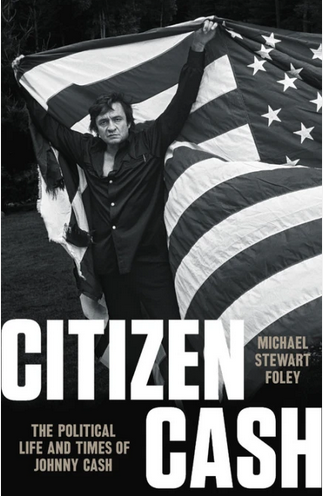 Unfortunately, we don’t have Sigmund Freud around to help us analyze Johnny Cash as America’s ultimate Rorschach test. And it’s not easy to imagine Austria’s greatest neurotic mind casually tapping his toes to “Ring of Fire” or “Man in Black,” much less comprehending petty idiocy like “Let’s Go Brandon” and the gnarly state of discourse in today’s divided US of A.

Still, the amateur Freud in us all can take a crack at it. And in Citizen Cash, author Michael Stewart Foley makes a pretty strong case for musician Johnny as an everyman who practiced a unique “politics of empathy” which allowed disparate sides to see the best of themselves reflected in his views.

To right-wingers, Cash was a patriot who supported the troops, the president (usually), and the working class. To lefties, he was a champion of minorities (especially Native Americans), prison reform, and broader inclusion in the American dream.

Foley’s book draws heavily on newly available archives from “The Johnny Cash Show,” which aired on ABC from 1969-1971. Over 58 episodes, Cash pushed the envelope — given the context of the times — by featuring African Americans and other guests who weren’t otherwise getting much space on the Land of the Free’s Big Three networks.

Foley skillfully weaves anecdotes about Cash’s stances throughout the book to illustrate the singer’s sometimes hard-to-define political positions. There’s no better example than the Sept. 3, 1969, episode of “The Johnny Cash Show,” when Black folksinger Odetta took center stage before an almost all-white audience in Nashville, “wearing a long, colorful dress and her hair in a natural Afro [and] could have been mistaken for a Black Power spokeswoman,” Foley writes.

Odetta sings a powerful blues number, “Black Woman,” with the kicker line, “Ain’t it hard when you got no place to fall?” As Foley interprets it, Odetta is telling this white Ryman Auditorium (and wider television) audience that “this place (the Ryman? Nashville? The South?) offers no welcome for her or her people.”

Cash greets her enthusiastically onstage after her performance. Taking her hand, he tells her he’s been buying her records since the 1950s and had always wanted to sing a duet with her. He shows her clear respect. At a time when Nashville and much of the South was still tacitly, if not officially, segregated, it was a powerful public moment of unity and equality.

So far so good, right? But here’s where Cash the symbol gets a bit more complicated.

A later segment on the same episode finds Cash “riding the rails,” taking viewers to several major Civil War battlefields. Cash sings a song called “Johnny Reb,” a tribute to Confederate soldiers. Afterward, he turns to the camera and says, “You know what, folks? I always was for the underdog, and in the case of the Civil War, you just gotta know whose side I’d be on.”

Cash is both saluting the Confederates as brave underdogs and admitting he would’ve backed them — the side that overtly supported slavery.

“One has to wonder what Odetta, offstage, thought of this performance,” Foley writes, before adding that Cash rarely took “stands” on political issues in conventional ways. “Instead, he approached each issue based on feeling.”

I’m trying to stay with Foley here, but the cynic in me suspects Cash wanted it both ways and didn’t want to offend his mostly white audience. Yes, it would have been easier for Cash to keep his show whiter and less controversial, and he deserves credit for not taking the safest route. Still, it’s uncomfortable hearing someone you otherwise admire declare — even in 1969 — that they would’ve rooted for the South to win the Civil War.

Citizen Cash is wider in scope than just covering Cash’s important TV work, however. For example, Foley highlights Cash’s 1963 album, “Blood, Sweat and Tears,” which he labels “the one great record made in support of Black lives by a country music star, even if almost everyone missed its message when it was released.”

Yet Cash’s style was subtle here, too, and his political criticism vague. Hence, listeners back then (or even now) might not recognize any particular message on the album at all. To paraphrase a Zen kōan, “Have you truly made a statement if no one can hear it?”

Foley is no Cash apologist, but I suspect he’d say the superstar ended his life with a ledger far richer in black ink than red. And the book makes a compelling argument in Cash’s favor regarding his stances on the major issues of the day. He was no firebrand and may have been determined to make no enemies, but Johnny Cash always believed America and Americans could be better tomorrow if we’d just find common ground to build upon today. Let’s hope he was right.

Michael Causey hosts the radio program GET UP! Mondays on WOWD 94.3 F.M. in Takoma Park, Maryland, and on takomaradio.org.