Rescuing the Planet: Protecting Half the Land to Heal the Earth

An environmentalist’s aggressive but achievable prescription for saving our world. 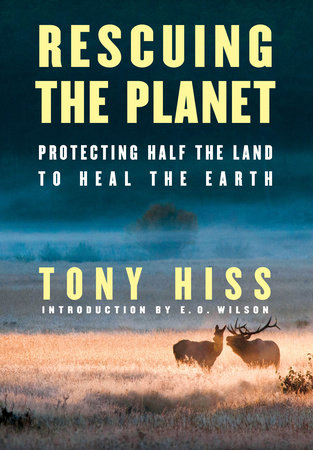 In Rescuing the Planet, author Tony Hiss advocates setting aside 50 percent of North America’s land over the next 30 years as protected wild area. Currently, the continent has less than 15 percent of its wild lands protected. “At heart,” he writes, “it comes down to how to share the earth with other species, and how much of the landscape not to change.”

Hiss’ new book is a how-to — based on proven conservation practices — for protecting the earth before the global population explodes to a projected 11 billion by 2100. There is no “Planet B,” he cautions, if we fail to manage sufficient habitat to reverse the current species-extinction crisis and promote the long-term health of our world.

Hiss focuses on North America because of its pioneering conservation ethos that started in the 19th century (with the designation of national parks and trails) and continues today. He argues that, as we move into the future, we have to do more to protect our national parks and points out the particular importance of the boreal forest in northern Canada and Alaska — “the Fort Knox of carbon” sequestration — as the lungs of the continent.

For Hiss, “Setting aside half the earth involves recognizing that the biosphere is our home, our frame of reference…the complex context for everything.” He writes that, while 50-percent notions may seem radical, these ideas have been around for a long time. As early as 1831, George Catlin, who painted the Native American tribes of the West, wanted the Great Plains turned into what he called “a magnificent park.”

Benton MacKaye published his ideas for the Appalachian Trail as early as 1921, and also gave birth to the notion of the Pacific Crest Trail in the Western Sierras. Aldo Leopold, author of the ever popular A Sand County Almanac, gave currency to the idea of a necklace of greenline parks across America. And Reed Noss, an influential Florida-based biologist, argued in the 1990s (along with famed conservationist E.O. Wilson) that at least half the land area of the 48 coterminous states should become “core resources and corridors” for wildlife.

Significantly, Hiss pays tribute to the outstanding work of women conservationists who have campaigned to save our forests and wildlife. Specifically, he praises Diane Boyd for her efforts on wolf restoration in the Yellowstone region, Lucy Blake for striving to protect the Northern Sierras in California from development, and Ann Satterthwaite for her work on building bio-zones that would expand the conservation spine of the Appalachian Trail.

Closer to our nation’s capital, Hiss reports on the work being done to preserve half the historic farmland and forests of the Delmarva Peninsula by 2031, an effort led by Rob Etgen, president of the Eastern Shore Land Conservancy. The “Delmarva Oasis Plan” is a good example of how land-use planning can help preserve green areas and wildlife within close proximity to high-density metropolitan areas.

Yet private-property initiatives can also be vital. Hiss notes with interest mogul Ted Turner’s 113,613-acre Flying D Ranch in the northwest corner of Yellowstone in Montana, which houses the biggest bison-restoration program in the country undertaken by a private businessman. And in South America, Kris and Doug Tompkins, founders of the North Face clothing company, purchased and set aside for preservation over 2 million acres in Chile’s Patagonia.

By highlighting the work of important groups both public and private, Hiss has crafted a valuable overview and inventory of land-use conservation. North America is especially blessed with what he calls the “good bones” of the Rocky Mountains and the Appalachians, core areas of wildness that can be expanded upon as we try to protect our diminishing landscape.

Be warned, though: Rescuing the Planet isn’t an easy read for one not versed in the complexities of American environmentalism. It contains a mountain of facts, ideas, and personal experiences that can be frustrating at times. And the final chapter is disappointing: Rather than provide an end-of-book conclusion, Hiss offers instead a long list of those who have helped him see the planet from a new angle.

These are small caveats, however, compared to the book’s great educational value. (To increase that value, read it in tandem with Simon Winchester’s new work, Land: How the Hunger for Ownership Shaped the Modern World.) And despite the very real and numerous perils facing our world, Hiss concludes Rescuing the Planet on the optimistic note that all is not lost. “For this glorious beleaguered planet,” he writes, “there’s room enough and time enough.”

John R. Wennersten is the author of Anacostia: The Death & Life of an American River, The Chesapeake: An Environmental Biography, and, with Denise Robbins, Rising Tides: Climate Refugees in the 21st Century.