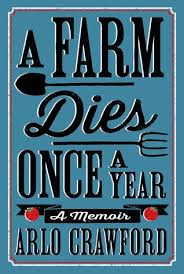 If you’ve ever shopped at a farmer’s market, you’ll enjoy this book. If you’ve never shopped at one, this account of life on a fruit and vegetable farm in Pennsylvania will make you want to try it. And if you regularly shop at the New Morning Farm market in Washington, D.C. — as I have for the past several years — Crawford’s intensely personal memoir, A Farm Dies Once a Year, is a must-read.

Four decades ago, Crawford’s parents started New Morning Farm, and although the name came from a Bob Dylan album, the farm was not some hippy-ish return to nature. From the beginning, the project entailed the hard work and heartbreak that goes with working the land. Crawford’s father abandoned law school in the 1970s to take up farming, and over the years, his father turned New Morning Farm into a successful business that grosses half a million dollars a year — though after paying for wages, seed, equipment, and maintenance, the net proceeds make for a modest income.

At 31, Crawford, dissatisfied with his work at a museum in Cambridge, Mass., and the lack of direction in his life, returned to his family’s farm during the summer season. He joined the staff of apprentices in taking care of the myriad tasks on the farm: planting, trimming, staking, and harvesting the strawberries, squash, lettuce, cabbage, basil, tomatoes, and other crops. With vivid language, Crawford describes this work as hot, buggy, and dirty, stretching into 13- and 14-hour days at the height of the season. Unlike his previous job at the museum, where he worked on projects that “had a checklist, a clear set of milestones,” farming allowed him to immerse himself “in the summer, a wide, warm ocean with no shore in sight and no landmarks to swim toward.”

But A Farm Dies Once a Year is about more than vegetables or farming. It is about fathers and sons, childhood and trauma, roots and ambitions. It is about self-discovery and self-fulfillment — those elusive goals that may be permanently beyond our reach.

Much of the book deals with Crawford’s father, a man he clearly admires and respects despite being keenly aware of his father’s flaws — notably the emotional distance that his all-consuming passion for making a go of the farm sometimes created. When Crawford returned to the farm, he attempted to construct a primitive shelter for himself and his girlfriend, and his father pointed out that the posts for the platform weren’t “true,” so the whole structure would wobble and collapse. “Finding these kinds of mistakes was my father’s specialty,” Crawford mused in one of his many riffs on his father. His father’s business for 40 years required “tempering his enthusiasms with an obsessive attention to detail”: “He looked over a freshly plowed field and saw where the drainage would be bad, examined a truckload of ripe peaches and picked out the first ones to rot, looked at a new puppy and saw the dead chickens it would eventually drag into the yard.”

Crawford also returned to the farm to find out more about a dramatic incident that had marked his childhood — the murder of his father’s close friend who also had left the city to take up farming. The killing capped a banal argument over barking dogs that annoyed the horses of an alcoholic neighbor, who, Crawford concluded, harbored a deeper resentment of city folks invading the countryside. This violent act left Crawford insecure and worried about his parents’ safety.

Crawford’s fears resurfaced the summer he returned. He and his father had a tense encounter with some locals as his father showed him around the farm his father owned before New Morning. After the murder of his father’s friend, Crawford became aware that even minor tensions have the potential to explode in violence, and his unease about the murder prompted him to visit the murdered man’s farm and even to seek out his daughter in Maine. Dealing with this trauma was one facet of Crawford’s coming to terms with his roots.

A Farm Dies Once a Year reaches a climax (of sorts) when the author describes his trip to Washington, D.C., for the Saturday morning market in a schoolyard in Cleveland Park, the culmination of the week of farming and harvesting. His rendition of his father’s patter as he roamed around the market, touting this kohlrabi, that batch of corn, these green beans at the peak of perfection, is so spot-on that it vouches for the accuracy of all his other observations.

It is in fact the vividness and economy of the author’s narration — his attention to detail in a language that is lean and colorful — that makes this book, along with the subject itself, such compelling reading. Often earnest, A Farm Dies Once a Year is punctuated with a wry humor directed sometimes at Crawford, sometimes at his parents or others, but always good-natured.

Crawford makes it clear from the outset that he never saw farming as his life, and none of his epiphanies over the summer change his mind. Nonetheless, watching the apprentices’ late afternoon activities at the end of the summer, he vividly describes the tug this place has for him: “I suddenly wanted to find my mother and father and tell them that I loved them. I wanted to stay there forever in the hollow, closed off from the world, in the shelter I’d built, with a table and a chair, a bed and full bookshelf. I wanted my grave dug under the black walnut, with Sarah’s there beside it, our children to plant a forsythia there that would bloom in the spring, the first yellow flowers of March. I wanted our bones to molder and the stone to grow dim, the rain to seep into the box and the tree roots to grow down through it, and someday the creek to rise and wash us all away.”

But the antics of the apprentices in the barnyard break the spell of that moment, and Crawford acknowledges that the farm will not last forever. Eventually, Crawford leaves the farm, moves to San Francisco, and gets a job in a natural food store that specializes in produce, which, he notes, is much easier than working in the fields.

Crawford does not belabor the title of his memoir. Even though his return to the farm gave him some insight about himself, it did not resolve his questions about the direction of his life However, he leaves us with the implication that knowing ourselves, like life on the farm, is not a one-time event, but a succession of seasons, each with its own harvest.

Darrell Delamaide, a journalist and author in Washington, D.C., is the author of four books, including the historical thriller The Grand Mirage. He also writes a food blog, You Are What You Eat.

The Columnist: Leaks, Lies, and Libel in Drew Pearson’s Washington

Burning the Reichstag: An Investigation into the Third Reich’s Enduring Mystery

A fascinating whodunnit about arson in pre-WWII Nazi Germany that created a dictator and changed the course of history.