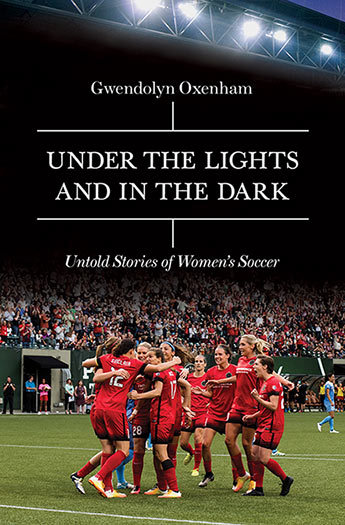 I struggle with American football in the same way I struggle with rodeo. There is a minute or two of action, carnage, athleticism, and machismo, followed by five minutes of hurry up and wait. I chew on my straw, or I count the sequins on the chaps of the rodeo queens.

I have never had this problem with soccer. It is a game of speed and constant movement. Gwendolyn Oxenham’s Under the Lights and In the Dark: Untold Stories of Women’s Soccer, has the brisk pace and storytelling to match. But the book’s true virtues are in its complexities and portrayals of the players whose lives are interesting both on and off the field.

A good sports journalist isn’t swept away in the Jumbotron fantasy of the game as pure glory. They aren’t numb to the stories of the side that lost by a nose or those who didn’t even come close. Instead, they understand that there are stories to be told on both sides of the scoreboard. They see that the tales worth telling are found in both those scoring goals and those waiting to be subbed in.

Oxenham — who has written for Sports Illustrated and Slate, has another forthcoming book, and even a film under her belt — is one such journalist. She understands a good sports story must work as a mirror to reflect the world around it. And, like Friday Night Lights or Seabiscuit, Under the Lights and In the Dark does just that.

Under the Lights is broken up into vignettes about a wide range of women soccer players from around the world. Athletes hail from or represent places such as Nigeria, Brazil, Sweden, and the United States. They face struggles that include everything from homophobia, homelessness, and extreme poverty, to injury, mountains of sexism, and many other issues that extend far beyond the game.

One of the most fascinating themes in the book is craft: how and where players chiseled their skills with a soccer ball into a precise and often awe-inducing art that makes them stand out among the hordes of hopefuls. For one player, it was at a football club for the homeless in Liverpool; for a second, it was on an evangelical soccer team called the Charlotte Eagles. Another still found her grit honed to a new level by playing with the men in an underground futsal league in New York City.

True to women’s soccer itself, the book is also interested in what happens to the players after they leave the sport. Unlike many other sports narratives, which often pretend players die in mansions when they’re no longer capable of playing, Under the Lights carefully notes that, for most, women’s soccer is a leg up.

It is as if soccer is a sprint toward a future instead of being the future itself. Oxenham shows this through players like Nadia Nadim, an Afghani refugee who grew up in, and played for, Denmark and is now in medical school, or Nigerian player Josephine Chukwunanye, who used her earnings from soccer to build her mother a house.

The book loses its pace in places, and I also wish Oxenham had inserted a bit more of herself into the narrative. She is an accomplished athlete who played soccer at Duke; her 2010 film, “Pedala,” chronicles her adventures finding pickup games around the globe. I also wondered what she thought the future of women’s soccer should look like. If this is a game that draws such a dynamic cast of heroines, what can we do to drive more people (and more money) to it?

Despite my qualms, this work is truly a testament to women’s soccer and women in sports. It is also a fun story for both sports fans and plain old readers alike. Under the Lights and In the Dark captures the drama, passion, and athleticism that draw so many to this sport.