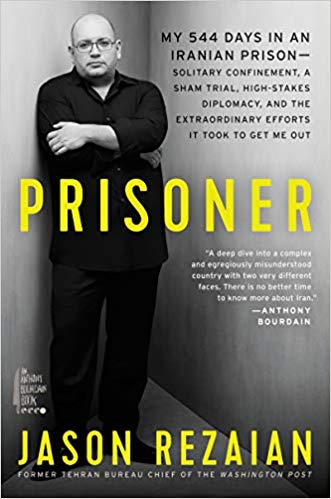 On the very last page of Prisoner, Jason Rezaian, preparing to leave Tehran after more than a year in prison, laughs at his two longest-serving tormentors — lying interrogators, representatives of the Kafkaesque Revolutionary Guard of the Islamic Republic: “You guys are even dumber than I thought.”

This expression of defiance is the culmination of what begins on the first pages of the book, details of a life disrupted by tenets contrary to Islam. As the Islamic Republic’s narrative becomes clear in the progress of his case, Rezaian finds the word for his situation. He presents it dramatically; it is the title of chapter eight: “Let’s Face It: I’m a Hostage.”

Rezaian was a journalist for the Washington Post from 2009-2014. At the end of the corrupt and malign presidency of Mahmoud Ahmadinejad, Iranians, suffering from economic sanctions, wanted to be seduced by the West. Rezaian saw his work as being a bridge between the United States and the Islamic Republic. In fact, he found himself rooting for Iran to continue opening.

His father had come from Iran, an immigrant who loved the U.S. and who admired his Persian heritage. His home, in the suburbs north of San Francisco, was a center of family and friends arriving from Iran and adjusting to a new life.

The elder Rezaian, a salesman at heart, had a successful occupation as a rug seller, and the son learned negotiating tactics at his feet, even opening a rug business in his youth. Having failed at that, the younger Rezaian went to the New School in New York City, studied with Christopher Hitchens (who became a mentor), and chose to return to his ancestral home to tell its stories.

It wasn’t all roses. His 5-year-old nephew died suddenly. His father died shortly thereafter. The authorities of the Islamic Republic told Rezaian, in the middle of those years, that it was time for him to stop writing and leave the country.

He took that warning seriously enough to separate from what was getting to be a good thing, and from a nice new apartment in a city he loved, Tehran. He spent four months in Dubai, where, one day, helping a friend out at an interview, he met Yegi, an energetic Iranian woman with whom he fell in love.

Convinced he wanted to return to Iran, he called the authorities to ask if he was welcome there. They said, “Of course, it is your home. But you cannot write.” He returned and married Yegi. He also wrote for the Washington Post until he and his wife were both arrested, in April 2014, as spies.

Each endured an initial solitary confinement of nearly three months, after which time Yegi was freed. The book isn’t about her, so we don’t know that whole story, but it must have been dreadful, too.

What the book is about and, more importantly, the attitude it takes, call to mind two other powerful confinement books, Solzhenitsyn’s The Gulag Archipelago and e.e. cummings’ The Enormous Room. The sense of injustice is palpable: the compression of space; the boredom and endless mental cycling of possibility; the bureaucratic loss of time; the challenge to sanity; the weight loss; the stupidity and cruelty of the warders. All these pour out of Rezaian, as they did from Solzhenitsyn and cummings.

Rezaian recounts an equally important aspect to the story, his brother’s (and the rest of his family’s) commitment to his well-being, and the public-relations campaign they and the Washington Post kept up during his incarceration, which unironically paralleled the diplomacy between the Obama administration and the Islamic Republic over its nuclear program.

Because the Islamic Republic couldn’t find any actual evidence of his spying, the truth quickly became that Rezaian, like the Americans at the U.S. embassy in Tehran in 1979, was, in fact, a hostage, a bad idea gone wrong.

If you’re the kind of reader who admires humility and are sensitive to its absence in an author, this book is not for you. (Rezaian was doing exactly what he wanted when he was caught up in historic events.) But no one can complain about the volume of information, the depth of insight, the compelling anger of this story.

Rezaian has been permanently changed by his, his wife’s, and his family’s suffering. His detachment, observational ability, and memory are trustworthy. When he says multiple times that he wanted to punch his interrogators in the face, the reader understands.

And Rezaian understands that his life is going to be defined by this event, demonstrating steely resignation in response. A detached observer to the end, Rezaian self-deprecates in the final scene. He was released in January 2016, in the midst of the U.S. presidential campaign. On the last page of the book, when he tells his warders how stupid they are, he is responding to their belief that Donald Trump will win the election.

Rezaian asks them why they believe this. They say, “Trump is the candidate who hates the Muslims most.”

[Editor's note: Jason Rezaian will be in conversation with Frank Sesno at George Washington University in Washington, DC, tonight at 7 p.m. Click here for details.]