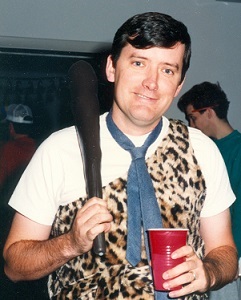 I have no memory of a time when I didn’t know John McNamara. I was 18 months old to his 2-and-a-half years old when my family moved into our little Cape Cod whose back yard touched on the diagonal with his. He and his siblings went to Catholic school, while my brother and I went to the public school across the street, but we spent virtually every day of our summers together as we grew up.

In about 1971, when I was 9 and John was 10, a handful of us — including my brother and his — decided to put out a newspaper. Hanging out on our screen porch, we wrote copy by hand and typed it up on an old manual typewriter; copies were made using carbon paper. We put out a few issues by the end of the summer. So John started in journalism even earlier than you may have heard.

Of John, I can truly say that we have been lifelong friends. (The photo above shows him at an early 90s Halloween party dressed as Fred Flintstone, something for his young colleagues he would term an OCR: "obscure cultural reference.")

He and his wife, Andrea, celebrated their 33rd wedding anniversary in May, and I don’t know another two people who are a better match for each other. As Andrea recently said, their biggest argument was about which of them was the luckier to have the other. He was set to celebrate his 57th birthday at the end of this month.

Though John was unabashedly a sports guy, I can’t think of a single subject we ever talked about on which he didn’t have an informed perspective. He was a citizen of the world: knowledgeable, engaged, intellectually curious.

The last time I talked to him — Saturday, a week ago practically to the minute as I write this, at my nephew’s engagement party — we were discussing the upcoming Tuesday primaries and the endorsements his paper’s editorial staff had made. I live in Anne Arundel County, and the Annapolis paper that John wrote for, the Capital Gazette, addressed local races and candidates that matter to me.

In attempting to hold up my end of the democratic bargain of being part of an informed citizenry, I fully appreciate how lucky I am to still have a functioning local newspaper that actually covers those races.

The last time I talked to John was also five days before he and four of his colleagues were shot to death while simply trying to do their job to get that daily local paper out.

In the scant 48 hours since we learned the worst, when I manage to drag myself away from obsessively searching for and reading or watching everything I can find that mentions John, I wonder at how he and his colleagues arrived — through these most horrific circumstances — at the confluence of so many of the hot-button issues of our current moment in the American story.

I will set aside for this moment the hottest of the hot-button issues — gun violence, the one category in which the United States can claim unrivaled, zero-competition primacy — though I have always wondered at the insistence we have on calling each new mass shooting a “tragedy,” when the correct word is “massacre.”

I will even leave aside the president’s savagery of the mainstream news media, and the increasing threats of physical violence that many journalists report receiving, though I will point you to Katy Tur’s descriptions in her book Unbelieveable: My Front-Row Seat to the Craziest Campaign in American History of the then-candidate whipping his crowds into “cheering about the idea of killing journalists,” a la Vladimir Putin.

Instead, in tribute to John, my focus is on the crucial, unique role that local newspapers play in maintaining our democratic process.

In his latest book, Overload: Finding the Truth in Today’s Deluge of News, Bob Schieffer notes in alarm the dwindling number of small city papers, the ones we have traditionally counted on to keep an eye on our state and local elected officials. Perhaps even more concerning are the papers being bought up by wealthy patrons with the intent of driving a specific agenda on and off the editorial page.

It seems less and less that all politics is local, when the politics coming out of the White House and Congress consumes so much of our limited attention span, and as it becomes increasingly difficult for well-intentioned citizens to find non-partisan, fact-based information about the entire slate of candidates we vote for.

And yet, it’s our local officials who typically have the greatest immediate impact on our daily lives, from choices on local policing tactics to the manner in which to enforce federal statutes. We need local papers for their ability to focus our attention on our immediate communities, on which the rest of our world is built.

I joked with John that I subscribed to the Capital primarily to do my part to keep him employed. Sometimes it didn’t feel like a joke. In the 20 years I’ve lived in Anne Arundel County, I’ve watched in alarm as the paper continues to shrink in every figurative and literal way; it’s even printed on smaller sheets of newsprint now.

Through John, I heard the blow-by-blow of the paper’s acquisition by the larger but also struggling Baltimore Sun, and winced at the realization that the acquiring newsroom now got first dibs on the plum assignments, including the sports desk. Still, on his new beat, John continued to tell human stories, as he always had, elegantly and eloquently.

One was of a Crownsville man who, after the Marjory Stoneman Douglas massacre, crushed his assault rifles with heavy construction equipment and posted the ceremony on YouTube.  Another recent story remembered the crowds that gathered in Bowie and elsewhere in Maryland 50 years ago to witness Robert Kennedy’s funeral train as it traveled from New York to Washington, DC.

But John also did his share of reporting on the local political races, his final printed story being on the projected outcome of the Prince George’s County Executive race.

For those of you who have been following the story out of Annapolis of five people who died because they worked for a newspaper, and want to know what you can do to help, here is my best advice on how to honor these people:

I will always remember John in his element, telling a story with that twinkle in his eyes, gesticulating with an open hand or a pointing finger to further the tale, getting his whole body into the telling of it. As many of his friends have noted, we could count on his dry, observant wit to cut to the heart of any issue with surgical precision. He always made me laugh.

I leave you with this thought, which comes directly from John. In one of his last Facebook posts, on June 10th, he offered this:

To anyone reading this: I cannot urge you strongly enough to see the two documentaries now out featuring Ruth Bader Ginsberg and Mr. Rogers. Seeing these two films will do you some serious good. Both are marvelous and moving. And, in these troubled times, when the forces of darkness seem to have gained the upper hand, it's nice to be reminded that there is still justice and kindness in the world. You can thank me later…

John, I thank you now, later, and always. Godspeed.

(Read more of John’s most recent stories here. And find out more about the fund has been set up to help the victims' families here.)

Jennifer Bort Yacovissi’s debut novel, Up the Hill to Home, tells the story of four generations of a family in Washington, DC, from the Civil War to the Great Depression. Jenny is a member of PEN/America and the National Book Critics’ Circle, and writes a monthly column and reviews regularly for the Independent. She served as chair of the 2017 and 2018 Washington Writers Conference and just finished being president of the Annapolis chapter of the Maryland Writers Association.