Overload: Finding the Truth in Today’s Deluge of News

The veteran journalist offers a handbook for informed citizens and considers how we can all do better next time. 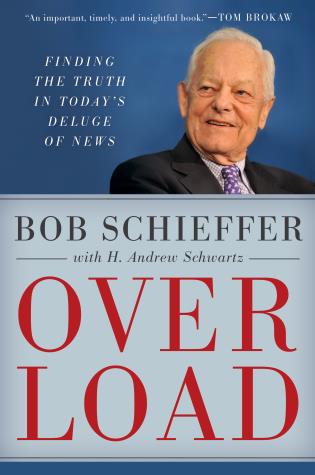 In a campaign and early presidency that has been filled with alarming pronouncements, Donald Trump’s branding the independent press “the enemy of the American people” raised its share of eyebrows. However, it’s the question of how that independent press is going to survive into the future that has veteran journalist Bob Schieffer concerned.

Much of what he and co-author H. Andrew Schwartz address in Overload are issues that have been brewing since the birth of cable news and have kicked into hyper-drive now that everyone holds instant news in the palm of their hand. But it was the 2016 presidential campaign that truly underlined for Schieffer the magnitude of what is at risk.

It turns out that Overload is a manual of sorts for both journalists and civilians who care about maintaining a thriving fourth estate and who are making a good-faith attempt at participating in the well-informed citizenry that the Founding Fathers knew was crucial to a functioning democracy. It’s their aim to help that audience, as the subtitle says, “[Find] the truth in today’s deluge of news.”

If we think this last campaign was tough for us to get through, consider what it was like for a guy who’s been in print and broadcast journalism for 60 years. According to Schieffer, he used the phrase “I’ve never seen anything like it” so often in his television appearances that his colleagues started a drinking game over it.

He ticks off the grim statistics of the many newspapers that have folded, the number of states lacking a single newspaper that covers its congressional delegation in DC, and the fact that, in the best year for newspaper circulation in ages, several venerable dailies still ceased publication.

The worry is that, outside of DC, New York, and L.A., regional news outlets are simply disappearing. Where will citizens find (possibly) non-partisan information on local and state candidates, and who will keep an eye on those candidates once they become elected officials?

Still, though the details here are often disheartening, it’s not all bad news, and there is something comforting about reading words of encouragement from someone who is one of the acknowledged greats in the business and has — certainly after the last two years — truly seen it all.

The authors discuss the newspapers that are doing things well, primarily by realizing that putting ink onto newsprint should not be their only — or even their primary — focus; the broadcast and cable networks and staff that seem to have a guiding set of principles; and even radio’s continued contribution in the form of the venerable NPR.

They share contributions from some of the other media greats. Very helpfully, the authors provide a roundup of the best or best-known examples of media outlets, including the “natively digital” news websites like Politico, Slate, and (yes) Breitbart, as well as podcasts and newsletters.

There is much here to consider, but the question remains unanswered as to how media outlets make enough money to survive in an online world whose participants generally expect content to be free. Even with plummeting print ads, newspapers still typically make more money in print than in online advertising.

Also, how does a legitimate outlet that needs paying subscribers to stay afloat compete with fake-news purveyors who spread their content for free in order to further a partisan agenda? In fact, as the authors point out, fake news is wildly remunerative, with one former writer reporting that he made $10,000 to $30,000 a month churning out fake articles.

The other issue in the constant, instantaneous, and thoroughly interconnected news-iverse is that incorrect information, once distributed — whether innocently or with malice aforethought — can never be called back. That’s why it’s disturbing to know that BuzzFeed’s editorial policy is, “When in doubt, publish,” and the Daily Beast advises its reporters that 70 percent certainty in a story’s accuracy is good enough, on the premise that wrong information can be corrected as quickly as it was disseminated.

Tell that to the folks at Comet Ping-Pong in DC.

Even for the media outlets that work hard to get the facts right, it’s worth noting that not all facts are of equivalent value to an informed populace, nor of equivalent cost to report. It’s extremely easy to report factually what a candidate says, but exponentially more demanding of time, resources, and tenacity to be able to report the degree to which there is any truth behind the words themselves.

Overload ought to become required reading in journalism curricula. Indeed, in his afterword, Schieffer offers a final teachable moment by illustrating what journalistic tenacity actually looks like to those who would learn the lesson.

David Fahrenthold of the Washington Post recently won the Pulitzer Prize for the reporting he did on Donald Trump’s charitable giving. This was a journalist’s hearing the words the candidate said and then deciding to see whether those words held true, and his paper being willing to let him.

After the campaign, Fahrenthold wrote an article describing exactly how he got the story, which involved months of dogged pursuit that included calling 300 different charities. With the Post’s permission, Schieffer reprints the article in full.

Schieffer and his contributors posit that reputable journalists are still out in force, and they remain on the side of “the fundamental ethical principles of journalism — telling verifiable truth, maintaining independence from sources and subjects, disclosing conflicts of interest, and serving the needs of citizens.”

Given that, it’s possible to imagine that we the people can survive even this.

The Right to Sex