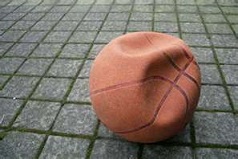 The one time that my DC-based grandparents were briefly apart during their courtship, in September 1916, they corresponded through numerous, lengthy letters. It helped that, at the time, there was twice-daily mail delivery even to rural Bluemont, Virginia, where my grandmother was staying.

In one of those letters, my grandfather describes going to a double-header “between the Nationals who are at present playing dandy baseball and the Boston Red Sox, who are the prospective World Champions.” He notes, “The first game was won by Boston, the score being 2 to 1 — the great Walter Johnson going down to defeat.”

I shared this snippet with John McNamara, knowing he would appreciate it. At the time, I was working on my novel, and he was researching and writing The Capital of Basketball: A History of DC Area High School Hoops. He immediately asked, “Did he say who Johnson was pitching against? I bet it was Babe Ruth.”

Sure enough, further research revealed that the opposing pitcher that day was none other than the Babe. It was not his rookie year, but he was still not famous enough for my grandfather to remark on this battle of baseball titans.

Though Babe’s pitching career was short-lived — his value at bat demanded that he be in the line-up daily — Johnson went on to be the hero of the 1924 World Series, when he came in as relief in the ninth inning of Game Seven and held the Giants scoreless through three innings, until Washington finally scored in the 12th.

Ninety-five years later, as I watched the Nationals battle through the World Series, knowing how they’d battled through the whole season, often down but never out, the one overriding thought I had was how much John would have loved this whole year.

I remember when the Nationals came back to DC, ending our 33-year baseball drought, and moved into their forever home at Nats Park, John recounted how he and some friends had taken a day off and gone to the ballpark for an afternoon game. “This is what we missed all those years,” he told me. “We should have been ditching class to go watch the games.” We lost the Senators and our hero, Frank Howard, when I was 9 and John was 10.

John was a passionate DC sports fan, though able to be dispassionate in his reportage, with a depthless knowledge of virtually every player in every sport at every level of play. When his widow, Andrea Chamblee, set out to finish Capital after John was murdered at the Capital Gazette in 2018, she found that none of the photos for the book were captioned yet since he, of course, already knew who everyone was, along with all their relevant stats and, probably, game-by-game commentary.

When it came to football and basketball, I think that John enjoyed covering (and talking about) high school and college programs and players more than the pros, but he loved the Nats. This year in particular, he would have cheered the camaraderie, soaked up the obvious joy the players took in each other, chuckled at their happy celebrations in the dugout.

He would have remarked that they reminded us all of kids who just loved playing the game, but also how they worked and played as a true team, and how that teamwork paid off every time.

(The bookish among us simply melt at the fact that relief pitcher Sean Doolittle visits indie bookstores in each away-game city and promotes reading for children.)

So perhaps it was fitting that, the day after the huge parade in DC to hail the conquering heroes, John’s book on DC high school hoops officially launched at Politics and Prose, with words from longtime University of Maryland football and basketball announcer Johnny Holliday, Washington Post sportswriter Liz Clarke, and Baltimore Sun reporter Jeff Barker, among others.

As close to finished as the book was, completing it was a team effort, too — from Andrea, from John’s previous co-author David Elfin, and even from DeMatha’s legendary coach, Morgan Wootten, who helped fill in many of those missing captions.

(At the book launch, Andrea shared that she started to figure out the rough timeframe of when each photo was taken by assessing how very short the players’ shorts were or whether their socks were pulled high over the calf.)

I keep thinking about all the things that John’s missed in the 16 months he’s been gone. He’s missed the Capitals winning the Stanley Cup — and the Cup’s visit to the Capital Gazette newsroom — then the Mystics’ championship, and now the Nats’.

He’s missed finishing his book and having it published. He’s missed that his book sold out in an hour at Politics and Prose, and that it’s the number-one basketball book on Amazon.

He’s missed knowing how much his friends miss him.