Unbelievable: My Front-Row Seat to the Craziest Campaign in American History

The cathartic laugh/cry we all need, even if it’s painful. 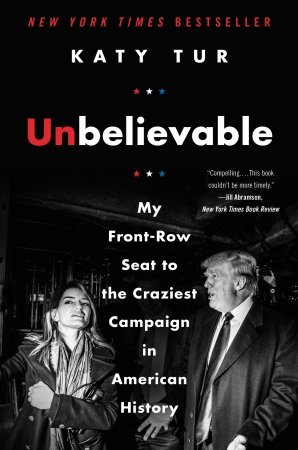 In Unbelievable, Katy Tur had me at her dedication. Rather than “For Mom” or “For Pooky-Bear,” it’s “For the love of God.”

In life, timing is everything, for good or ill. (“If I hadn’t decided to turn right at the corner just then, I never would have [met my soulmate] [been hit by that dump truck].”) Tur was a young NBC foreign correspondent living the life in London and spending romantic weekends in Paris, when a quick trip back to the States just happened to coincide with NBC’s decision to put someone on Donald Trump’s improbable (“ridiculous,” “hilarious”) presidential campaign.

Learning she was about to be tapped to follow him full-time, she called a veteran of earlier campaigns for advice. He told her to accept. “If you hate it, at least it will be short.”

Sure, it was funny at the time.

Trump’s bizarre love-hate relationship with Tur reared its head at the first campaign event she covered, just two weeks after his entry into the race. In the rain in a donor’s back yard in Bedford, New Hampshire, she was startled to hear him call her out, mid-speech, with a telling complaint, “I mean, Katy hasn’t even looked up once at me.”

Tur covered Trump longer than any other reporter, despite never having done political reportage before; without wanting to, she became part of the story she was covering. By not backing down in the face of personal attacks from her assigned candidate, or from the resulting death threats from his followers, she earned the respect of her colleagues, her own hashtag (#ImwithTur), and equal footing with her hero, Andrea Mitchell, as one of the indomitable “road warriors” of the campaign.

Plus, unlike most of the seasoned political reporters she found herself among, Tur, living as she was on a steady diet of packed and screaming Trump rallies across the U.S., never discounted the candidate’s chances of winning.

Tur takes an inspired approach to telling a story that we just finished living through — at least from our view in front of the stage. She slingshots back and forth between accounts from the long campaign (“May 23, 2015: 535 Days Until Election Day”) to the minute-by-minute ticking clock of Election Day itself. The stomach-clenching suspense is unexpected.

Along the way, she fills in the backstory of her from-birth training as a newshound and pulls the curtain back on the less-than-glamorous life of a press-corps journalist.

For those who still experience the election of 2016 as a raw, open wound, Tur’s intimate recounting may need to be read through splayed fingers. The rest of us just want video of the drunk Trump press corps’ early-morning election-day plane ride, with CNN’s Jeremy Diamond attempting to sled in the aisle during take-off, and Jim Acosta and Tur taking selfies with a passed-out Mark Halperin.

The author’s storytelling is earthy and accessible, and — as in the chapter, “Pop the Trunk. I’m Going to Run for It,” about dragging a couch-sized suitcase a mile through the snow to LaGuardia to beg her way onto an already-closed flight to Iowa — helps us to laugh through some of the otherwise truly chilling episodes she recounts of Trump’s whipping up his crowds against the “lying, disgusting” media, which often included his pointing out “back there…little Katy.”

In one telling episode, at a rally just days before Christmas in 2015, Tur spends a lovely, impromptu half-hour in the ladies room with a hair dresser and Trump supporter who offers to help her get her hair TV-ready. During the rally, Trump ruminates on the idea that Vladimir Putin kills reporters, and considers whether he might do the same. “I hate them, but I would never kill them.”

As usual, Trump’s press corps is corralled together behind barricades, as Tur observes, “caged in the center of the arena like a modern-day Roman Colosseum.” She notes the poinsettias, the wreaths, the holiday sweaters, “and the crowd is cheering about the idea of killing journalists…[T]o the lady who curled my hair in the bathroom, who is now somewhere in the crowd that is laughing at the idea of Trump killing me: Thanks, my hair looks great.”

Tur proved her mettle during a long and painful campaign, surviving that and much more — not the least of which was Trump’s grabbing her by the shoulders and kissing her, apparently because he liked her relatively softball coverage of him moments before on “Morning Joe.”